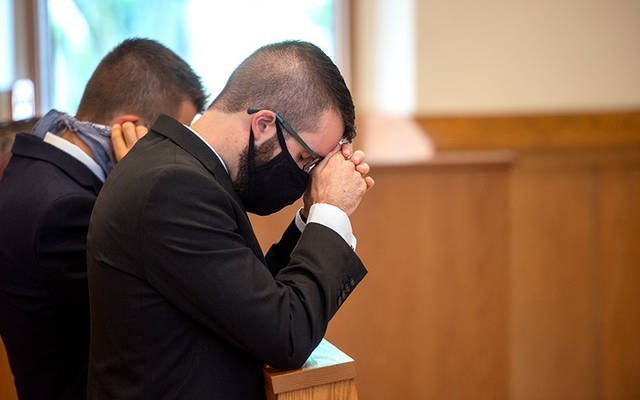 Seminarian James Muscatella kneels during an Aug. 10 Mass for his Rite of Candidacy at the Diocese of Rochester’s Pastoral Center in Gates. (Courier photo by Jeff Witherow)

“There was a bit of sadness, even before the coronavirus came to head, of the notion that I would be leaving my classmates, the men that I’d spent a year and a half with and had grown so close with,” he told the Catholic Courier Aug. 10.

In January, Bishop Salvatore R. Matano had asked Muscatella — who was then halfway through his second year at St. John’s — to consider continuing his studies for the priesthood this fall at the Pontifical North American College and Pontifical University of Saint Thomas Aquinas in Rome, Italy.

Muscatella, who attends the Parish of the Holy Family in Gates, accepted the bishop’s offer and began the application process in early February. Shortly thereafter, St. John’s sent its seminarians home due to the pandemic, and Muscatella finished this year’s studies online.

“I think St. John’s did a fine job,” Muscatella said of the online learning experience. “The professors put in a lot to make it work.”

In the spring, Muscatella was accepted into North American College. He had planned after completing the 2020 spring semester to study Italian in Assisi, Italy, before heading to seminary in Rome. However, he said the pandemic forced him to forgo those plans and that several appointments he had scheduled to get a study-abroad visa also were cancelled. He visited the Italian consulates in both Boston and New York City, and did manage to obtain a visa at the end of July.

“It sort of came down to the wire,” Muscatella said, noting that his plane ticket to Rome was already booked for Aug. 19.

He said Aug. 10 that he needed a COVID-19 test before he left and upon arriving in Rome, and that he will have to spend his first 14 days there in quarantine at the seminary.

Despite these complications, Muscatella said he is looking forward to the opportunity to continue his studies in the Eternal City.

“By the grace of God, even if things are a little hard, or different, or difficult, there is just going to be a great gain to be had,” he said.

Muscatella won’t be the only seminarian in Rome from the Diocese of Rochester. He will be joined there by Aaron Kelly, who will return Sept. 2 to start his third year at the North American College. The Horseheads native had returned home March 26, three days after the seminary sent all its seminarians home to continue their studies online.

“What was interesting was, because of the time difference, at first, we had to wake up in the middle of the night to go to class. So for the first couple of weeks I was home, I would wake up at 2:15 a.m., and go to class from 2:15 a.m. to 6:30 a.m.,” Kelly said of his online experience.

Since finishing his classes in early June, Kelly — who attends Blessed Trinity/St. Patrick parishes in Tioga County — has been helping Father Peter VanLieshout at St. Peter Parish in Clifton Springs. Like Muscatella, Kelly will have to get tested for COVID-19 before he leaves for and upon arriving in Rome, and will be quarantined for 14 days after arrival.

In-person classes are set to begin in October.

“I’m looking forward to just being back with my friends, my classmates and the community over there,” Kelly said. “It’ll be good to be back and to see everyone.”

While Kelly and Muscatella are heading to Rome, six Diocese of Rochester seminarians moved to St. John’s Seminary at the end of August. Among them is Mark Wegener, whose first seminary year was cut short when he was sent home in mid-March to continue his studies from his parents’ home in Corning.

Wegener — who had spent the summer assisting Father Matthew Jones at All Saints Parish in Corning — returned to Boston Aug. 25. He told the Catholic Courier Aug. 11 that the seminary had asked seminarians to avoid traveling out of state for two weeks before returning to the campus in order to minimize exposure to the virus. The seminary also notified seminarians that they may experience changes, such as staggered meal times in the refectory, when they returned, Wegener said.

“I think we (St. John’s Seminary and its students) are taking the necessary precautions, and I think we are good to go. I’m looking forward to getting back,” he said.