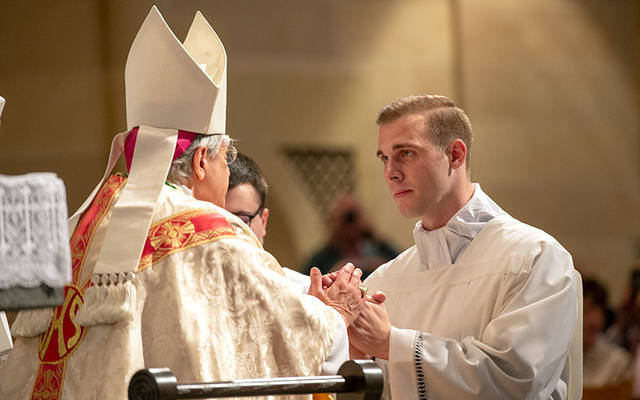 The priestly ordination of Deacon Joseph Martuscello will take place as originally scheduled — yet privately, due to the coronavirus pandemic — on Saturday, June 13.

The Catholic Courier plans to livestream the ceremony in which Bishop Salvatore R. Matano is scheduled to ordain Deacon Martuscello. Check the Courier website for details as the date draws closer.

In a May 11 letter to the people of the Diocese of Rochester, Deacon Martuscello explained that neither his ordination nor his June 14 first Mass of Thanksgiving will be open to the public due to governmental restrictions on public gatherings. He added that Bishop Matano gave him the option to be ordained after such restrictions have loosened, but that he chose to go forward as originally scheduled.

“Desirous of receiving the gift of the sacred priesthood, and not wanting to delay the beginning of my ordained service to God and his people as a priest, I decided to proceed with the ordination,” Deacon Martuscello wrote.

“I ask for your continued prayers for me in these final days of preparation,” he added. “I await the day when we may gather again when I may offer the Holy Sacrifice of the Mass for you and with you. With that said, there will be another Mass of Thanksgiving and celebration at a later and more suitable time after restrictions are lifted.”

Deacon Martuscello is a native of Ss. Isidore and Maria Torribia Parish in central Steuben County. Bishop Matano ordained him to the transitional diaconate in 2019.