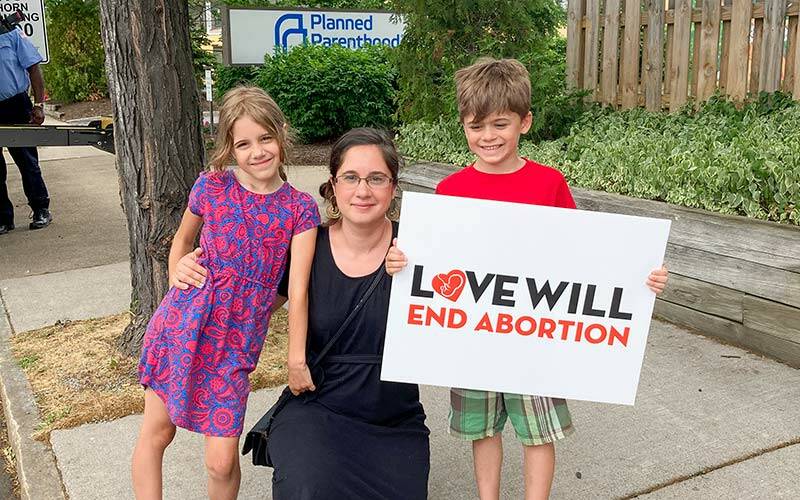 Ellen Duncan is seen with her children, Elizabeth and Nathaniel, outside Planned Parenthood on University Avenue in Rochester June 26, 2021. (Photo courtesy of Mike Warren)

Tyler Davis became aware of abortion when he was a teenager, but it has always been part of his life.

“I was supposed to be aborted,” the 23-year-old explained.

Davis’ mother was in a crisis pregnancy, and doctors pushed for her to have an abortion due to a fetal defect. But his mother resisted her doctors’ advice.

“I ended up being fine,” Davis noted. “I have had plenty of medical issues, but I definitely feel like I’m stronger as a result of them.”

Knowing the story of how his parents chose life for him, Davis said he has always had a pro-life perspective. Even so, he didn’t get involved in the pro-life movement until the fall of 2019.

That’s when Davis, who became Catholic while in college, started participating in sidewalk advocacy outside the Planned Parenthood facility in Rochester. He also has participated in the ROC Love with End Abortion’s Stand Out for Life events and Compass Care’s Walk for Life.

Davis has also joined in pro-life demonstrations, including protesting the construction of a Planned Parenthood facility in Brighton. He said he also was lucky to be involved with efforts leading to the closing of the Greece Planned Parenthood facility, which was across the street from the Wegmans where he worked. Davis would pray the rosary outside the location before or after his shifts and, when the building was torn down last year, he took rocks from the site.

“I got to see the fruit of that (pro-life effort), and I was right there when they tore that building down,” said Davis, who is youth minister at St. Charles Borromeo Church in Greece and pastoral associate for youth and young adults at the Southeast Rochester Catholic Community.

Katharina Nieves: Pro-life values are ‘a big part of my life’

Like Davis, Katharina Nieves said she grew up with pro-life values, having been raised in a Catholic family. But it wasn’t until college that she too became involved in the pro-life movement.

Before she started attending SUNY Geneseo in 2019, Nieves had learned about the college’s Students for Life organization from its president, who attended her parish, St. Luke the Evangelist in Livingston County.

“We talked a lot about the issue, and she pushed me to kind of get involved,” Nieves said.

When the president graduated, Nieves took over the group, which is a chapter of the national organization Students for Life of America.

“That’s kind of when it became a really big part of my life,” said the 20-year-old Nieves. “Once I realized what it was about, what it meant and how important it was — and what the environment, the very pro-choice and aggressive environment there was at Geneseo — I knew that it was really important to be involved in a very active way.”

Her involvement with the Geneseo chapter led to a full-time position with the national organization, helping to start new chapters and supporting existing ones.

Nieves, who graduated from SUNY Geneseo in May, no longer works for Students for Life of America. and is now registrar and coordinator of academic planning at St. Bernard’s School of Theology of Ministry in Pittsford. Even so, she said she keeps up with news about pro-life issues and attends events, rallies and prayer services in the Rochester area.

“It’s not my job necessarily anymore that I get paid for to talk about, but it (abortion) is still a part of my everyday conversations,” she said.

Ellen Duncan: ‘The Holy Spirit wanted me to do this’

Ellen Duncan also grew up in a pro-life family, and her father, Ray Buonemani, had been involved in pro-life efforts since the movement’s earliest days. But what prompted her to take a more active role in the movement was the passing of New York’s Reproductive Health Act in 2019.

“I was talking to one of my best friends about how horrible it (the law) is, and we both asked, ‘What are we going to do about it?’” Duncan said.

Soon after, Duncan’s friend heard about a training session for ROC Love Will End Abortion sidewalk ministry at St. Jerome Church in East Rochester, which happened to be Duncan’s parish.

“I attended (the training), and I felt right away that the Holy Spirit was prompting me to get out on the sidewalk,” the 32-year-old mother of three added.

“It (mom mentors) is a group of women, who, when we meet someone on the sidewalk who has turned away from her abortion appointment, will connect with a mentor who will really walk alongside her and just hearing her specific needs and how we can then support her,” Duncan explained.

Even though the  Supreme Court overturned  its 1973 Roe v. Wade decision as part of its June ruling in the case Dobbs v. Jackson Women’s Health Organization, Nieves, Duncan and Davis agree there’s still work to be done, and that they need to have

A crucial part of that work, they said, is having conversations about abortion, especially with fellow young adults who identify as pro-choice.

As a parent, Duncan said one of the best ways to educate members of the younger generation is to show them through actions what it means to be pro-life.

“We need to make sure that our children know that they can be proud to be pro-life,” she said. “It’s not something to be embarrassed by.”