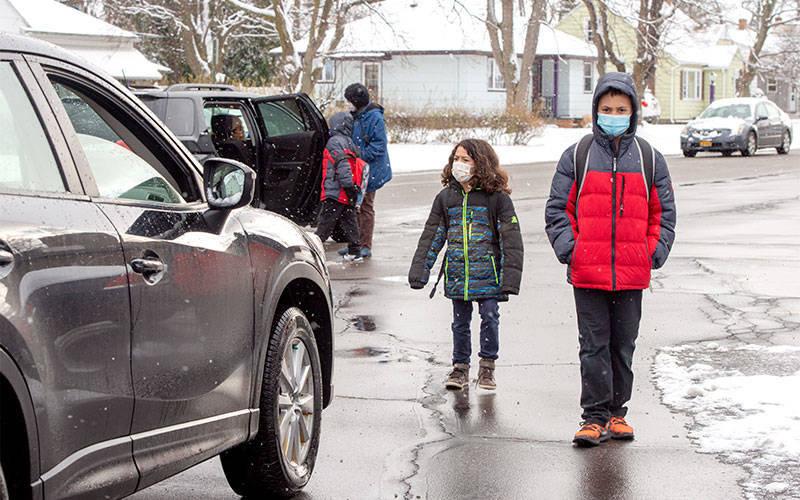 As the summer of 2020 progressed, Stephanie Weaver felt growing apprehension about her two sons, Isaac and Leo, resuming public-school education in the City of Rochester. They had recently concluded a three-month stretch in which they struggled to learn remotely, and the same prospect confronted them for fall, as the city school district could not guarantee offering a return to classroom learning — even on a part-time basis — due to the ongoing threat of the coronavirus pandemic.

“The boys just don’t do well with at-home learning. They just don’t. They were playing video games,” Weaver recalled, adding that she and her husband are essential workers who could not easily stay home with the boys to oversee their academic progress. “I had not a single idea what I was going to do.”

But one late-summer day, as Weaver was driving past Rochester’s St. Ambrose Academy — located less than a mile from the family’s home — her eye was caught by a sign saying registrations were still being accepted. Upon further investigation, she found that St. Ambrose was offering in-school instruction five days per week. Isaac, a fourth-grader, and Leo, a third-grader, soon enrolled at St. Ambrose for the 2020-21 school year and thus far are enjoying sustained success in their new Catholic-education setting, much to their mom’s relief.

“The boys love school,” she said.

Stories such as the Weavers’ have been surfacing at Catholic schools all over the Diocese of Rochester, according to James Tauzel, diocesan superintendent of Catholic schools. He said enrollment has increased by at least 10 percent at several schools, with the availability of five-day-per-week, in-school education at all diocesan schools as a leading attraction.

Having that option available “has absolutely brought people to us,” said Christine Deutsch, principal at St. Ambrose, where enrollment has risen from 105 students in 2019-20 to a current total of 121. On the other hand, the Rochester City School District’s elementary schools — from which some of Deutsch’s new students transferred — continued with all-remote learning into January, and many suburban public-school districts have operated since September on a hybrid model that routinely alternates between in-school and online instruction.

Meanwhile, Elizabeth Jensen, principal of St. Agnes School in Avon, has welcomed new students from several communities in Livingston and southern Monroe counties, with enrollment growing from 80 students in 2019-20 to 98 this year.

Jensen said that in addition to the new pupils, returning students — who hadn’t been inside the building since March, when the COVID-19 virus forced the start of lengthy public lockdowns across the Rochester Diocese — have benefited from the return to full-time classroom learning this year.

And looking ahead, Tauzel observed that many families who turned to diocesan schools as a temporary solution have become so satisfied with Catholic education that they plan to stay put in 2021-22 even if their public districts resume in-school learning.

“I think those ones that have changed their minds are doing so because of the positive experience they’ve had,” he said. “We’re walking the talk in what we say, what we do.”

Last summer, officials filed New York state-mandated school-reopening plans for all 16 diocesan schools to offer in-person schooling five days per week, based on the capacities of the school buildings and their enrollment projections.

“We knew that’s the way students learn best,” Tauzel said, adding that a high level of support for in-school instruction had been found among 1,069 respondents to a diocesan survey about reopening.

The reopening plans included such safety requirements (see story on page 14) as mandatory face coverings for students and staff, social distancing, minimal student movement, morning temperature screenings, frequent hand cleaning with soap and sanitizer, and thorough cleaning of buildings. Although the plans addressed a possible return to fully remote learning if COVID-19 transmission rates were to rise significantly, Tauzel said all diocesan schools — even those in state-designated COVID-19 “hot zones” — have maintained full in-school learning since September by adhering to state requirements and maintaining minimal cases of infection.

“We didn’t lose any days of instruction,” Tauzel said, adding that only a tiny percentage of diocesan Catholic-school students are learning remotely this school year (see story on page 15).

Despite the adjustments necessitated by COVID-19, the superintendent noted that the high academic standards long associated with Catholic education have remained a constant. Deutsch said that from speaking with new parents at St. Ambrose Academy, “I think the level of instruction has exceeded their expectations.”

Count Stephanie Weaver among the new St. Ambrose parents who are highly satisfied with the education their children are getting.

“Here, everything gets broken down — I see the grades and the explanations behind them,” Weaver said. “It’s clear what the (children’s academic) deficits are and what the strengths are.”

Tauzel noted that recent results from i-Ready, a diagnostic tool used in public and private schools to assess student growth in reading and math, showed that students in diocesan Catholic schools maintained academic growth while learning remotely last spring. Despite such positive news, however, Tauzel emphasized that the intangible benefits of Catholic education go beyond academics and cannot be experienced from home.

“We look at holistic development — social, emotional and spiritual — which are harder things to measure,” he said.

This total package has been evident to Ariana Mennucci, a first-year kindergarten teacher at St. Agnes School. Joining her as newcomers to the school have been her sons Luca and Giuseppe, who are in fifth and second grades, respectively; and daughter Fia, a pre-kindergartner.

“I couldn’t be happier,” Mennucci remarked. The Livonia resident said the school upholds “high academic and behavioral expectations for students, while still valuing those beautiful and special childhood moments that they’ll never get back.”

“I just like it a lot. It’s really nice being here,” he said. “Everybody’s super-nice.”

Based on their positive experiences thus far, the Weavers and Mennuccis are gearing up for a return to St. Ambrose and St. Agnes, respectively, in 2021-22.

“I’m 100 percent sure,” Stephanie Weaver said, adding that her husband plans to work extra hours so they can continue to afford their sons’ tuition.

And Ariana Mennucci, while noting that she plans to return as St. Agnes School’s kindergarten teacher “as long as they’ll have me,” added that Luca, Giuseppe and Fia will definitely be back as students.

Such comments are music to the ears of Deutsch and Jensen, who listed retention of first-year families as a priority along with attracting more new students for 2021-22. In fact, Jensen said she already considers her newcomers to be integral parts of the St. Agnes family.

“They don’t feel like new students to us. From the very beginning, it feels like they’ve been here all along,” she said.

Jensen said it’s been a roller coaster year for the Avon school, noting that the late addition of many students for 2020-21 has helped strengthen St. Agnes’ future following an emergency fundraising campaign last spring that raised $124,000 — well past the $100,000 goal — despite taking place early in the pandemic.

“I guess the only way to say it is, God had some sort of plan there,” she remarked.