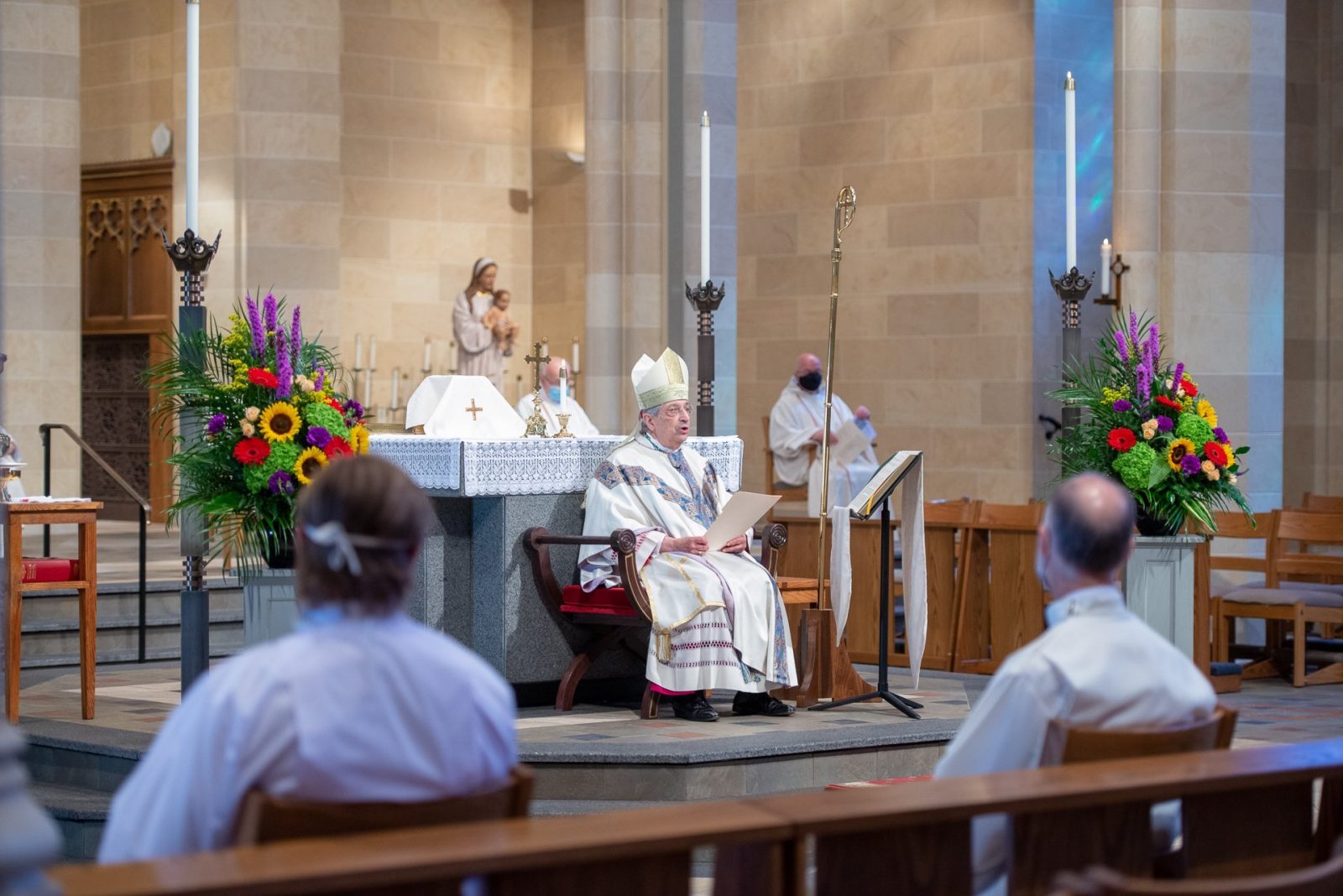 Diocese of Rochester deacons reminisce about calls to vocation

The year he was ordained, Deacon Paul Clement began serving in prison ministry at Groveland Correctional Facility in Livingston County, where he was cochaplain along with his wife, Barbara.

The Irondequoit native attended St. Cecilia parish and school before becoming a member of Bishop Kearney High School’s first graduating class. He attended Rochester Institute of Technology and later worked as an engineering manager at Xerox Corp. while he and his wife attended St. Joseph Parish in Penfield.

He eventually was led to pursue the permanent diaconate and was in his third year of formation when Bishop Matthew H. Clark asked the Clements to work at Groveland Correctional Facility a few hours a week. During this time, Deacon Clement and his wife also visited their parish’s ill and homebound as well as those in nursing facilities, in addition to Deacon Clement serving at Mass for St. Luke the Evangelist Parish in Livingston County. He also is a Fourth Degree Knight of Columbus.

Today, Deacon Clement still serves St. Luke’s five worship sites, while his wife is on the pastoral council. Throughout his vocation, he said he has enjoyed getting to know the “wonderful people” he interacts with at both the prison and the parish and hopes to continue his ministry with both.

Deacon Gary DiLallo said he was influenced to a vocation by his desire to serve.

As a child, Deacon DiLallo was a parishioner of St. Hyacinth Parish in his hometown of Auburn, where he also attended the parish school before going on to graduate from the former Mount Carmel High School in Auburn.

Prior to applying to the diaconate, he earned a bachelor’s degree from the American University in Washington, D.C., worked as a police officer and served 37 years in the U.S. Army before retiring with the rank of brigadier general.

“Serving in the military, and serving as a police officer, and then serving as a deacon — it was just natural to serve,” Deacon DiLallo recalled.

After his diaconal ordination, he served as parish deacon at St. Mary in Waterloo for several years before Bishop Matthew H. Clark granted him a five-year transfer to the Archdiocese of New York, while he served as a deputy commander and chief officer of a 10,000-person U.S. Army Reserve division.

Following his leave, Deacon DiLallo became faith-formation director at Blessed Trinity/St. Patrick parishes in Tioga County. In 2009, he was appointed pastoral administrator of Auburn’s St. Hyacinth and St. Francis of Assisi parishes, which in 2012 merged to form Ss. Mary and Martha Parish.

In 2014, Deacon DiLallo retired from his pastoral-administrator position. He now lives and ministers at a parish in the Diocese of Syracuse.

Despite his wife’s wishes, the deacon said he does not see himself leaving diaconal service anytime soon.

“I’ll just keep on going, and probably after (reaching senior status), I will just continue to go,” Deacon DiLallo said.

Although he moved away from the Diocese of Rochester, Deacon Stanley Grenn continues diaconate work in Jacksonville, Fla., where he currently resides.

Deacon Grenn studied at the former Sacred Heart Seminary in Hempstead, N.Y. He continued his studies at John Carroll University, earning a bachelor’s in sociology and later completed a master’s in rehabilitation counseling at Kent State University in Ohio.

Afterwards, he entered the Diocese of Rochester’s diaconate program. After ordination, he served at St. Theodore Church in Gates and as a chaplain at Monroe County Jail (1990-94).

Deacon Grenn was excardinated into the Diocese of St. Augustine, Fla., in 1994, serving as a deacon for Resurrection Catholic Church.

Although he has reached senior status, he continues to work as a member of the Diocese of St. Augustine’s justice and peace commission.

Despite having reached senior status, Deacon James Hankey continues to assist at All Saints in Corning on occasion.

Deacon Hankey grew up in Corning and worked for Corning Glass (1971-86), first as an engineer and later in information technology. He had graduated from Clarkson University with a bachelor’s degree in industrial distribution and a master’s degree in management.

In 2011, he began serving on the board of CareFirst, which provides hospice and palliative care for Steuben, Chemung and Schuyler counties. He also served as a chaplain for Arnot Ogden Medical Center and spiritual adviser with CareFirst (2013-2015).

Both in diaconal ministry and his full-time work, Deacon Michael McGuire has done substantial good for those in need.

As a deacon he first served at St. Mary in Canandaigua, his home parish (1990-94), and St. Januarius in Naples (1994-2001). In January 2004, he began as full-time Catholic chaplain at Elmira Correctional Facility, a maximum-security prison. He remained there until reaching senior status in December 2014. He also has worked for the Division for Youth and as a probation officer, and is the former national director of ConQuest Boys Clubs, a Catholic youth-development program.

Deacon David Palma vividly recalls the surprise he felt when Deacon Stan Zawacki stopped him one day in his home parish of St. Mary in Rochester and asked if he’d ever considered the diaconate.

“Other voices in the community joined Stan. I finally realized that they saw something in me that I didn’t,” Deacon Palma remarked.

After ordination, he was assigned to St. Anne/St. Gregory in Palmyra/Marion, and served there as pastoral associate from 1990-95. He then worked with the diocesan Office of Migrant Ministry from 1996-97 and as a campus minister for Rochester Institute of Technology and National Technical Institute for the Deaf from 1997-2000.

Deacon Palma served from 2000-11 as diocesan director of deacon personnel, and from 2006-11, he also was diocesan director of deacon formation. He then was pastoral administrator at Rochester’s St. Frances Xavier Cabrini Parish from 2011-12; pastoral administrator at St. Mary in Rochester from 2012-15; and pastoral associate for the Southeast Rochester Catholic Community of Blessed Sacrament, St. Boniface and St. Mary parishes from 2015-20.

“The day I was ordained I never dreamed that I would be called to serve in such diverse ministries,” he said.

Deacon Palma said he remembers with affection his many colleagues in ministry over the years and credits the support of the communities he’s served and the love and commitment of his late wife, Juli, with making his ministry possible.

“Because of all of them, these 30 years have been a great grace and a profound joy in my life,” he said.

Deacon James Steiger grew up in Rochester’s Holy Redeemer Parish, and during his elementary years at the parish school, he dreamed of becoming a priest.

He attended St. Andrew’s and St. Bernard’s seminaries, but he withdrew from St. Bernard’s in 1967 to care for his ailing parents. Due to lack of finances and support, he could not continue with priestly formation, he recalled.

“As I look back, I think the Lord had other ideas in mind for me,” said Deacon Steiger.

He was an active parishioner at St. Leo Church in Hilton when he completed diaconate formation. After ordination, he served as parish deacon at St. Leo (1990-2002) before leaving to work at other parishes.

Deacon Steiger served at Nativity of the Blessed Virgin Mary (2002-07); St. Joseph, Rush (2008-10); and St. Elizabeth Ann Seton, Hamlin (2010-13), while concurrently working in the diocesan Tribunal (2002-present), but returned to the Hilton parish in 2013. Although he retired from active ministry four years ago, Deacon Steiger said he still occasionally assists at St. Leo.

“My whole purpose now is to continue to serve the church in whatever capacity they need my services as long as I have my health,” he said.

Deacon John Antenucci felt the first stirrings of a call to a religious vocation as a child growing up in New York City, but his initial interest in the priesthood faded as he got older.

After graduating from Manhattan College with a bachelor’s degree in mathematics in 1959, he began working in the manufacturing industry, specializing at first in statistical quality control. After working for several companies, he joined Xerox Corp. in 1966 and worked there until his retirement in 1998.

He considered the permanent diaconate in the late 1970s, but the timing wasn’t right because he and his wife, Roni, had two teenage sons at home. The Antenuccis, who belonged to Church of the Resurrection in Fairport, became involved in the Cursillo movement and World Wide Marriage Encounter. When Deacon Antenucci felt the call again in the early 1990s, the timing was right.

“My ordination in 1995 was the culmination of a discernment process that was not easy, but was of profound importance to myself as a human person and to my relationship with Roni (and) my family,” he said.

Deacon Antenucci ministered at Holy Apostles and the former St. Anthony of Padua Parish in Rochester and served as president of the local St. Stephen’s Diaconal Community Association. In 2002, the Antenuccis left Rochester and later settled in Sarasota, Fla., where Deacon Antenucci was involved with jail ministry.