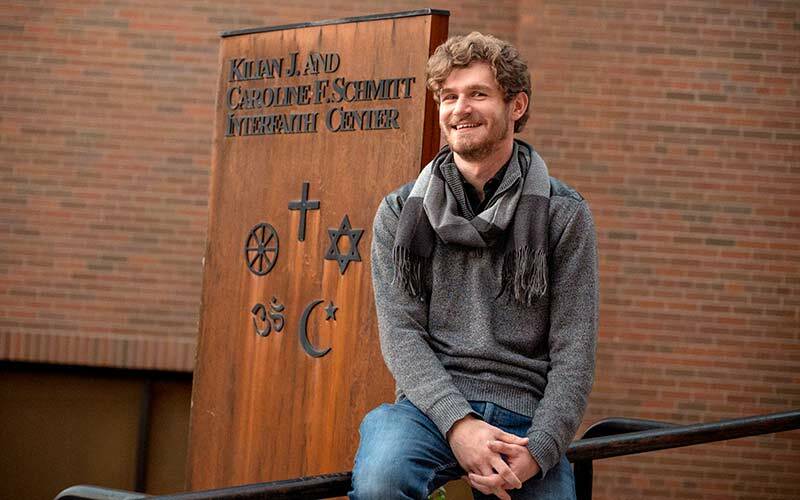 Chase Lear poses for a photo outside of the interfaith chapel at the Rochester Institute of Technology Nov. 3. (Courier photo by Jeff Witherow) 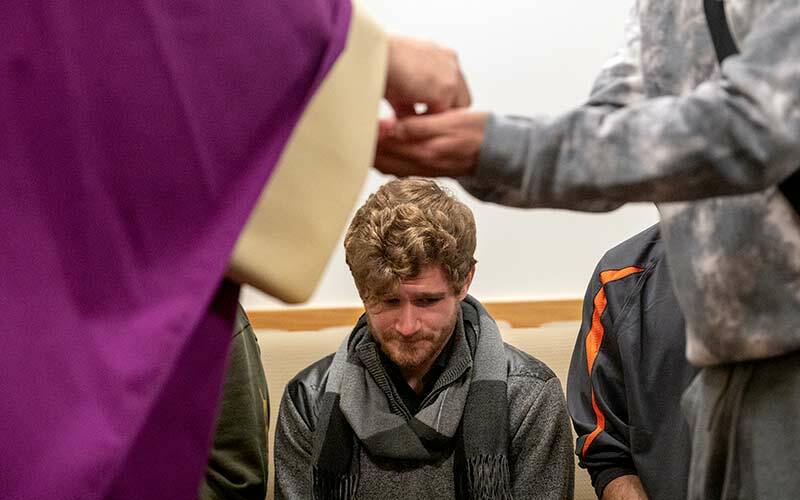 HENRIETTA — Although their stories unfolded 2,000 years apart, it’s easy to see why Chase Lear likens his spiritual journey to that of St. Paul.

Both were young men who refused to accept Christ into their lives before undergoing conversions. Thereafter, they became consumed with spreading the good news.

Lear’s said he had harbored “a deep and dark conviction of atheism” during his adolescent years. Yet the 22-year-old senior at Rochester Institute of Technology gradually came to embrace the Catholic faith, going through the Rite of Christian Initiation of Adults process through the school’s Newman Catholic Community. He was baptized, confirmed and received his first holy Communion this past Easter Vigil.

College student says faithful Catholics were models for his conversion

Although he said he grew up in a family with “deep roots in the Catholic Church,” Lear turned to rebuking the church and other institutions during his teen years.

“I was a very rebellious child,” he acknowledged.

However, even when he rejected God, “He was nonetheless right by my side, walking through my dark and sinful life with me all along,” Lear said.

Unlike the conversion experience of St. Paul, a persecutor of early Christians who was temporarily struck blind on the road to Damascus, Lear had no dramatic encounter with Christ. Rather, he said, his conversion was gradual.

“Ultimately, there was no profound logical argument from a theologian or apologist that moved my heart,” he said, noting that he drew closer to Jesus thanks largely to “the presence of the loving and faithful Catholics around me.”

Thus began what Lear described as “a deep love for the Catholic Church. … I found myself gradually drawn more and more to the beauty of the sacraments.”

With family and friends looking on, Lear was welcomed into the church April 16 during an Easter Vigil Mass at his home parish, Hanover’s Basilica of The Sacred Heart of Jesus, in south-central Pennsylvania.

This summer, Lear took part in a missionary service program at the Youth Apostles Institute in Virginia. Now, back with RIT’s Newman community, he’s serving as a leader for the current four-person RCIA class.

Lear is majoring in new media interactive development. He acknowledged that his academic workload is intense — but never to the point that he’d ignore his faith life.

Instead, Lear said he pops into the Schmitt Interfaith Center “pretty much every day” whether to attend Mass, pray the Liturgy of the Hours with fellow students or just get homework done.

“Our (5:30 p.m.) Wednesday Mass is always fun. There’s always a solid, regular group of people. We usually go out to dinner afterward,” he said.

Lear said his Catholic faith will remain a big priority regardless of where his career may take him after graduation from RIT, scheduled for May 2023.

“Your witness doesn’t stop. You are always an example, a hand of Jesus to other people,” he said.

Lear said he plans to continue stressing Catholic theology and traditions to counter a secular world he said “openly rejects” Catholic values on such matters as chastity, marriage and family. Through his evangelization efforts, he seeks to connect not only with people immersed in the Catholic faith but also those who are unchurched — even if they initially resist his message.

“I love when people have qualms or questions. I see my old self,” he remarked. “Converts lead converts. I love being that person.”

Tags: Monroe County East, Newman Community, Profiles in Faith
Copyright © 2023 Rochester Catholic Press Association, Inc. All rights reserved. Linking is encouraged, but republishing or redistributing, including by framing or similar means, without the publisher's prior written permission is prohibited.