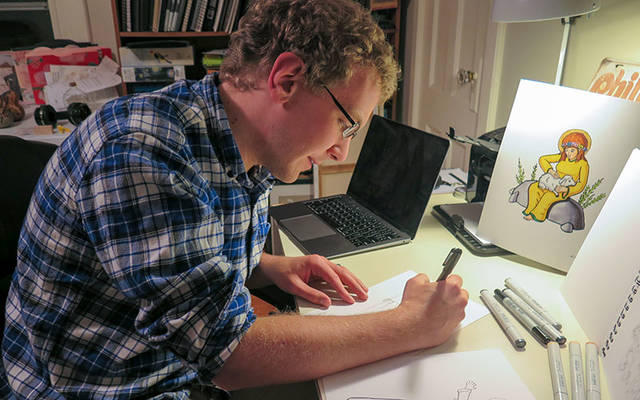 Frank Wolfs works on one of his saint drawings in his Rochester home Oct. 6. Wolfs’ drawings will be used for the Catholic Courier’s 2020 Coloring Contest. (Photo courtesy of Mark Capellazzi)

ROCHESTER — When the COVID-19 pandemic left him confined to his home this past spring, Frank Wolfs was looking to do something with his sudden free time.

He heard a speaker on Stations of the Cross Catholic Radio Network talk about using one’s gifts to help others this year. So Wolfs pulled out his sketch books and starting drawing.

While stuck at home, Wolfs began drawing such various animals as beavers and kangaroos, along with a series of drawings featuring a robot named Widget.

“I was sending coloring pages of my artwork to my friends that have young kids,” explained Wolfs, 30, who works as a software/mechanical engineer at OptiPro Systems in Ontario, Wayne County.

Then in July, Wolfs, a parishioner of East Rochester’s St. Jerome Parish, said he just started drawing saints. It was a venture he started working on a few years ago but felt that his skills at the time weren’t good enough to continue. After taking online illustration classes over the years and seeing there wasn’t a ton of other artists drawing saints, he said he decided to return to the project.

“I just wanted to challenge myself,” Wolfs said about revisiting the project. “I’m not the best at drawing the human figure, but I just decided to go and try it. Each one (I draw) is a practice for the next one.”

The first saint he drew this time around was St. John of the Cross, a 16th century Carmelite. Wolfs said the improvements compared to his previous drawings were “pretty incredible.”

Since St. John of the Cross, Wolfs has drawn more than 20 saints, including St. Maximilian Kolbe, St. Teresa of Calcutta and St. Michael. Wanting to share his artwork with others, he posted the drawings on his Frank Wolfs Art Facebook page and created a “Saints on Saturday” email list. People can sign up for “Saints on Saturday” to receive a new saint coloring page in their email inbox each week. In addition, Wolfs emailed parish faith-formation directors in the Diocese of Rochester and surrounding dioceses in New York and Pennsylvania to see if they were interested in including his artwork in their faith-formation classes. Wolfs also reached out to the Catholic Courier, which decided to use his artwork for its upcoming coloring contest, which began Nov. 2. As part of the coloring contest, children can choose to color one of four saints — St. Nicholas, Our Lady of Guadalupe, St. Dominic Savio or St. Teresa of Calcutta. (See the facing page for more on the 2020 Catholic Courier Coloring Contest.)

“I wanted to spread the message of God through these coloring sheets,” Wolfs told the Catholic Courier. “The people (I have reached out to) really like them and are very enthusiastic about them.”

In addition to the Catholic Courier‘s coloring contest, Wolfs and his wife, Gretchen, are putting together a paperback children’s book that they anticipate will be out at the end of the year or early next year. The book will feature poems written by Gretchen and illustrations of saints drawn and colored by Wolfs. Wolfs said the poems will include information on the saints so that children learn about the saints as they look at the illustrations. Though he and his wife are still working on their first book, Wolfs said he hopes to produce additional books in the future with more saint drawings and poems.

“Even if I don’t make a full living out of it, I still want to say I made an impact on a lot of people’s lives with my artwork at the end of the day, and I think this is a very good way of doing it,” he said.