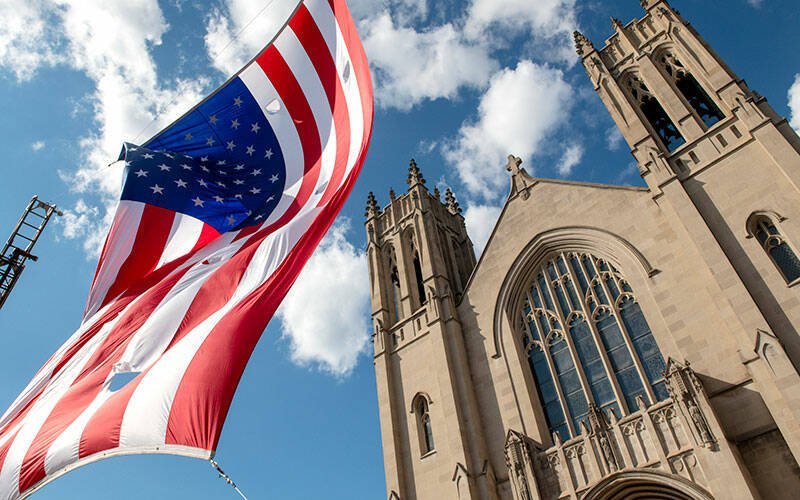 An American flag flies between two fire trucks in front of Rochester’s Sacred Heart Cathedral Sept. 11 during a Mass recognizing first responders on the 20th anniversary of the Sept. 11, 2001, terrorist attacks on the U.S. (Courier photo by Jeff Witherow)

Catholic leaders remember first responders, those who died on 9/11

ROCHESTER — As he observed dozens of uniformed fire and police personnel seated at Sacred Heart Cathedral Sept. 11, Deacon Edward Giblin was reminded of their many cohorts who two decades earlier had entered the burning World Trade Center buildings in New York City.

“Everybody else was running away, and they were running inside to their deaths,” remarked Deacon Giblin, a retired Rochester Police Department commanding officer.

To honor the sacrifices of those who perished or were injured during the Sept. 11, 2001, terrorist attacks on the U.S., as well as all other first responders, Bishop Salvatore R. Matano celebrated a Mass at the cathedral on Sept. 11, 2021 — the 20th anniversary of the attacks. Area fire, police, ambulance and hospital representatives as well as members of the public attended the 4 p.m. liturgy. Several first responders also took part in liturgical aspects of the Mass; meanwhile, a gigantic American flag was hoisted outdoors in front of the cathedral.

“Please know, my sisters and brothers, how much we appreciate your service to the community,” Bishop Matano told the first responders during his homily.

The event at the cathedral recalled the most deadly attacks ever on United States soil. Nearly 3,000 people, including hundreds of first responders, were killed as a result of the Sept. 11, 2001, mayhem in the World Trade Center’s North Tower and South Tower, the Pentagon in Washington, D.C., and in Shanksville, Pa., after terrorists hijacked four passenger jets that morning.

Deacon Giblin, who serves as director of the diocesan permanent diaconate, said he was at his desk in his role as captain of the Rochester Police Department’s Genesee Section when the attacks began.

“I was stunned. It was like our generation’s Pearl Harbor,” he said.

Meanwhile, Andrew Lonthair recalled “kind of going into protective mode, not knowing when the attacks would stop coming” and focusing on the welfare of his two toddler children.

“I remember being scared, but still having to be strong and the leader in my family,” said Lonthair, who has been a firefighter since 1990 and now serves as executive deputy chief of the Rochester Fire Department.

Lonthair, who issued welcoming remarks during the Mass along with Town of Gates Police Chief James VanBrederode, told the congregation that it took him nearly 19 years to visit Ground Zero in New York City. He later explained to the Catholic Courier that he was deeply affected by the loss of fellow first responders, knowing that he’s been in dangerous firefighting situations in the past and could have suffered a similar fate.

“What they experienced, going up into the towers and having that moment of realization, ‘We’re not getting out of this’ — it just struck me very hard,” Lonthair said, adding that he also grieved for the many fallen employees whose offices were at the World Trade Center — “people who went to work that day just to make their living.”

Lonthair said that going to the 9/11 memorial at Ground Zero last year proved difficult, but “I was so glad that I did.”

Regarding the Mass at the cathedral, Lonthair said it was “really pretty amazing — the amount of support being shown, people from the community coming out and showing their support and respect for us.”

He and Deacon Giblin expressed wishes that recalling our country’s ability to bond in the face of the 9/11 attacks will help restore a sense of unity among U.S. citizens that’s been largely absent in recent times due to deep political and social divides.

“Hopefully this can bring people back together again — showing compassion and mercy, extending our hands to strangers, instead of all the political divisions where you can’t even talk with your own family,” Deacon Giblin remarked.

“There are events throughout the year that put aside race, creed and political beliefs,” Lonthair added, “and I think today is one of those days.”

EDITOR’S NOTE: A nine-day Novena to St. Michael the Archangel, patron saint of first responders, will take place Sept. 21-28 at 8 p.m. each evening at Sacred Heart Cathedral, 296 Flower City Park, Rochester. It will conclude with a 7 p.m. Mass Sept. 29. In addition, Bishop Matano will offer an 11:15 a.m. Mass for Life on Respect Life Sunday, Oct. 3, at the cathedral.