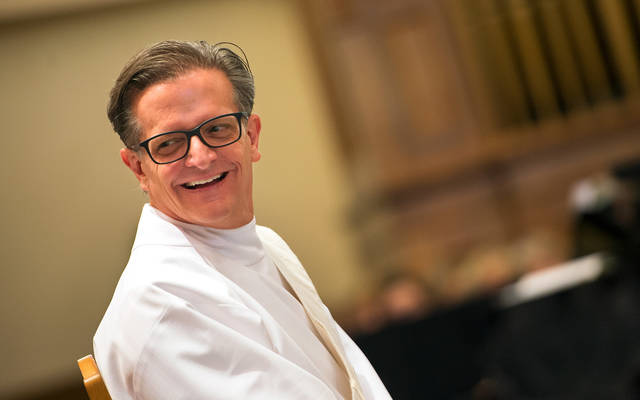 Father Kevin Mannara smiles at his family members during his ordination as a Basilian priest Aug. 5 at Rochester’s St. Mary Church. 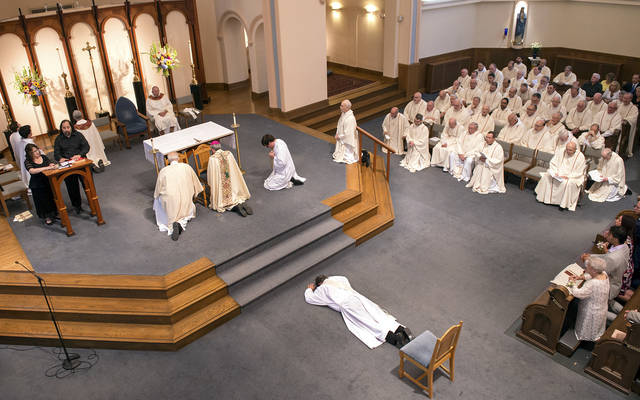 Father Kevin Mannara prostrates in front of the altar during his ordination Aug. 5. 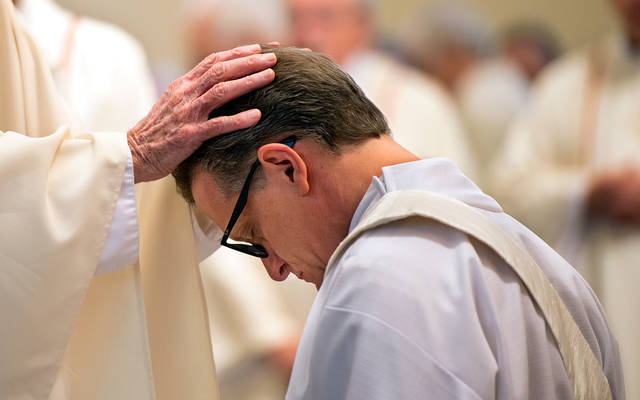 Priests lay their hands on Father Kevin Mannara’s head during his ordination Aug. 5.

Father Kevin Mannara has finally answered God’s call to the priesthood despite the circuitous route he took to get there.

Father Mannara, 53, was ordained Aug. 5 at St. Mary Church in Rochster. He is the first Basilian to be ordained in the Diocese of Rochester in 25 years, he said.

From a young age, Father Mannara wanted to be a priest the way other friends wanted to be police officers or cowboys, he told the Catholic Courier during an interview prior to his ordination. He said he had a great role model with Father Sebastian Contegiacomo, CPpS, who served as pastor of Most Precious Blood Church in Gates from 1937-69.

But he didn’t think of the priesthood again until his 1985 graduation from Niagara University. He entered the diocesan pre-theology program Becket Hall for discernment that same year.

Father Mannara still wanted to do ministerial work, however, so he became a teacher at Irondequoit’s Bishop Kearney High School. Subsequently, he left to teach in California for 11 years in the Los Angeles area.

When his father became ill, he returned to Rochester for what he thought would be a couple of years, he added.

“His illness lasted much longer, so I couldn’t leave,” Father Mannara explained. “As I look back (though), I see the hand of God in the whole thing.”

It was God who led him to a moment of clarity in 2008 as he prepared the altar for the final Mass at his home parish, he said.

“I had a feeling deep in my heart that said, ‘I’m never going to celebrate my first Mass here,’” he recalled.

The thought forced him to reflect on his interactions with parishioners at St. Mary Church in Rochester, where he was working as a pastoral associate, because they kept asking him if he had thought about being a priest.

“God’s people were asking the question,” he added. “I wondered, ‘Is that God’s way?’”

Father Mannara said he then contacted Father Brian Cool, who had befriended him when the two discerned together at Becket Hall.

“Kevin has always had a strong love for the church and was interested in serving God and Christ,” noted Father Cool, director of the Newman Community at the University of Rochester. “His passion never left him ‚Ä¶ and he found a home with the Basilian Fathers.”

Father Mannara said he decided to join the Basilian order because he felt a connection to their focus on education and parish work. He also appreciated their openness to ordaining him at an older age.

He said Father George Smith, superior general of the Congregation of St. Basil, once told him: “If God is calling you to our way of life, our challenge is to find a place for you.”

Father Mannara went on to obtain his doctorate in ministry from Catholic Theological Union in Chicago in 2013 while living as an associate with a Basilian community there. He had earned a master’s degree from St. Bernard’s School of Theology and Ministry in Pittsford after returning to the Rochester Diocese and later earned a master’s of divinity there in 2015.

Now that he has been ordained, he has been assigned to lead the Catholic campus ministry at St. John Fisher College.

For guidance on that work, he again turned to Father Cool, he said. Having been involved in campus ministry for nearly two decades, Father Cool said he looks forward to serving as a mentor to his longtime friend.

“I’m encouraging him to maintain an openness and flexibility that is required in working with young adults,” said Father Cool. “He is also coming in with lots of experiences himself, so his starting point isn’t square one. And he’s got a lot of institutional support.”

“The campus community is ripe and ready for the ministry to thrive,” Schott added, as half of the students identify as Roman Catholic and about 85 percent identify as Christian. “However, even the students of alternate faith traditions are expressing interest in the ministry and are stepping up to be a part of student leadership teams.”

Father Mannara said the Basilians at Fisher also will soon celebrate the opening of the Chapel of St. Basil and the 25th jubilee of Father John Huber, who also was a classmate of his at Aquinas Institute.

And the altar from his childhood parish was to be placed in the new chapel, he said, serving as just one more sign of God’s work in his life.

“My first assignment will be at the altar where I grew up, even though it’s in a different church,” Father Mannara said. “It’s pretty awesome.”