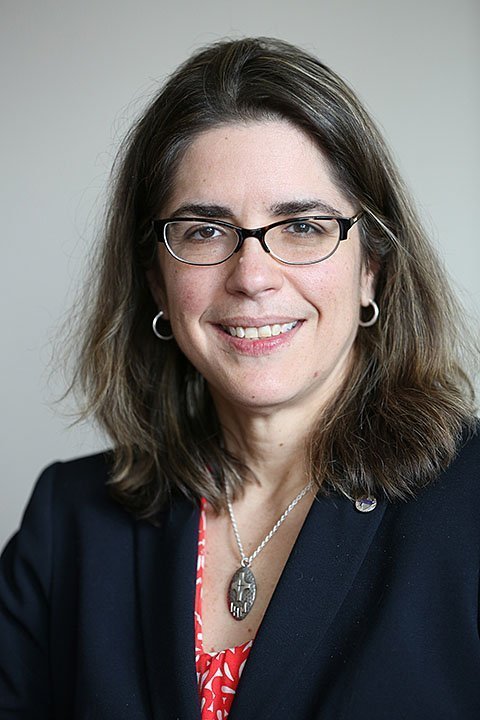 Sister Julie Vieira, a Rochester native, poses for a photo in Washington Nov. 19. A member of the Sisters, Servants of the Immaculate Heart of Mary, Sister Julie helps oversee the website "A Nun's Life."

WASHINGTON (CNS) — What started out as a blog at a time when few people knew about blogs and hardly anyone was familiar with Twitter is a living and growing ministry run by two women religious who are Sisters, Servants of the Immaculate Heart of Mary.

Sisters Julie Vieira and Maxine Kollasch oversee their website "A Nun’s Life" from Toledo, Ohio, which is a quick drive from their order’s motherhouse in Monroe, Michigan.

Soon they will be joined by a third sister because the Internet ministry continues to expand. Blogs have been joined by podcasts and heart-to-heart question-and-answer message boards for women — and men — thinking about religious life and whether it is something they should pursue.

And early in 2015, A Nun’s Life, found online at anunslife.org, will launch a redesigned website tailored to be more user-friendly, particularly for smartphone users.

Sister Julie, in a Nov. 19 interview with Catholic News Service, said she and Sister Maxine both professed final vows with their order in 2006, and A Nun’s Life has been their ministry ever since. A native of Rochester, N.Y., Sister Julie graduated from Aquinas institute.

In thinking of the missionary sisters "of today and yesterday, and all the things they had to do — build a house, find water" — it seems that what they are doing with A Nun’s Life is not all that different, she said.

She and Sister Maxine were "both technically savvy," she added. "We were looking (online) for stuff on nuns, sisters, religious life. All we found were caricatures. It was very problematic. … No one was out there defining who we are as Catholic sisters."

A Nun’s Life came from a joint realization by Sisters Julie and Maxine along with their religious superiors that the order’s newest members had some knowhow in the online world, and that their own order — and many others besides — could benefit from an online presence.

Back then, she added, the prevailing attitude was, "Oh! You’re Catholic sisters. Oh! You have computers! Oh! You’re using the Internet!"

She added that her favorite story from A Nun’s Life is that of a young man who took vows as a Dominican novice in the Netherlands. He gave much of the credit to A Nun’s Life for aiding his discernment. "You’re the ones who helped me, let me ask all the dumb questions," she said he told A Nun’s Life. "You let me see that religious are people, and now I am one, too."

Sister Julie herself had no access to any kind of online vocation or discernment website before she entered religious life in 1997. A native of Rochester, New York, she was working for a Catholic publishing house and studying theology in graduate school.

"I never imagined myself as a sister," she told CNS, adding she thought all nuns fit the popular stereotype of women in full habits and teaching in schools.

In her studies, she said she found herself "captivated by the theology of (Father) Karl Rahner. … It got to the point, ‘Why is this affecting my prayer life?"

When Sister Julie approached her professor about this, he said she might benefit from spiritual direction. "I was, ‘What?’" she remembered reacting.

The spiritual director turned out to be an Immaculate Heart of Mary sister. "After several months, I was listening to her … talking about ‘my sisters’" with a warmth and love one would expect about blood sisters," Sister Julie recalled.

It convinced her to explore religious life "to be faithful to who I am as a Catholic woman," she said. "I felt I had to do it, at least to cross it off my list."

And now Sister Julie is helping others be faithful to themselves as they explore vocations.