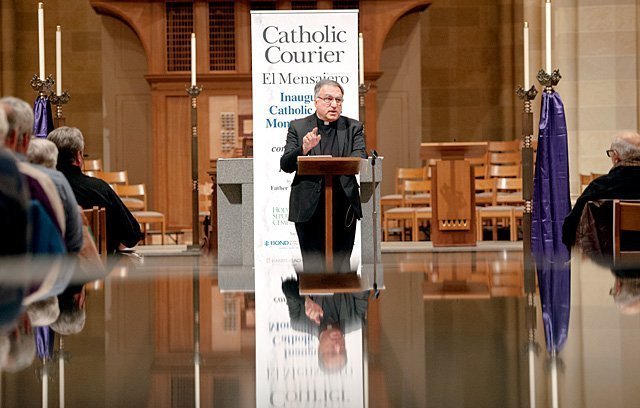 ROCHESTER — In just two years Pope Francis has “opened the floodgates of communication” in the Catholic Church, which effectively had been a cloistered institution, and has rebranded both Catholicism and the papacy, according to Basilian Father Thomas Rosica.

A Rochester native, Father Rosica has served since 2013 as English-language assistant to the Holy See Press Office. He spoke at Sacred Heart Cathedral Feb. 19  to deliver an inaugural Catholic Press Month lecture presented by the Catholic Courier and El Mensajero Cat√≥lico.

In introducing Father Rosica’s talk on the topic “Catholic Communications in the Age of Pope Francis,” Karen M. Franz, the newspapers’ general manager and editor, said she hoped the annual lectures would create greater awareness of Catholic media, which provides the context necessary to help readers understand church teachings and positions.

The Courier served this mission well over the last several decades, said Father Rosica, who noted that his journalistic career began at the Courier in 1975, when as a student as Aquinas Institute he began reporting on his school’s events for the newspaper’s youth-run RapAround section.

“What has always impressed me about the Courier has been the ways that this Catholic newspaper has lived up to the standards of the broader journalistic profession to which it belongs,” said Father Rosica, who in addition to his duties at the Vatican also serves as chief executive officer of Canada’s Salt + Light Catholic Television Network.

In his role at Salt + Light, Father Rosica occasionally sends reporters out to ask people on the street what they think the Catholic Church is all about. Until a few years ago, respondents usually cited the priestly sex-abuse crisis and the church’s opposition to abortion, gay marriage and birth control, he said.

Gradually, however, those answers have been changing since Argentinian Cardinal Jorge Mario Bergoglio, SJ, became Pope Francis in March 2013. Now people on the street talk about Pope Francis, frequently commenting on how much they like this pope, who is concerned about mercy, compassion and love, especially for the poor, Father Rosica said.

“Whether we wish to admit it or not, Pope Francis has won over the media. By no means is this an indication that the teachings of the church and the message of the Gospel have been fully understood or received by all. Nevertheless, something has shifted in terms of Church-media relations,” he added.

Although the pope’s messages are not always understood, the world is now listening to the pope in unprecedented ways, Father Rosica said. The world has been captivated by the Holy Father, who has a knack for making significant gestures that convey powerful messages, he said. Media outlets do an injustice, however, when they negatively compare Pope Benedict XVI to the current pontiff, he added.

“If today we are basking in the Franciscan light, it is because we owe a debt of gratitude to Pope Emeritus Benedict XVI and his courageous decision to step down two years ago. … It has changed the church forever, it has changed the world forever, and it certainly changed my life,” Father Rosica said. “Benedict’s resignation provides a rare but profound example of humility in action. … He has set a new course for the church.”

While many positively received reforms and actions now underway actually began under the watch of Pope Benedict XV, the current pontiff’s spontaneous public interactions with the public and unscripted conversations with the media are unique to Pope Francis, he noted. Many of Pope Francis’ actions, such as his decision to go to confession in public during a penance service last March, come as a complete surprise to even his closest aides, Father Rosica said, recalling his own shock at seeing the pope kneeling in front of a confessional, an action that was not included in the detailed script in Father Rosica’s hands.

“That’s the beauty of this pontificate. We don’t have a script, and he doesn’t have to be tamed,” Father Rosica said.

Pope Francis also surprised his aides just a few months after his election when he expressed a strong desire to visit the Italian island of Lampedusa, where thousands of African immigrants have died in recent years while trying to reach Europe. The pope’s team put him off, telling the Holy Father that it would take months to plan such an excursion, but news reports about hundreds of immigrants drowning en route to Lampedusa only strengthened Pope Francis’ resolve. Before long Jesuit Father Federico Lombardi, the Vatican’s spokesman, received a phone call alerting him to the fact that someone identifying himself as Pope Francis had been calling commercial airlines and inquiring about chartering a flight to Lampedusa, Father Rosica recalled.

When asked if he by chance had been the man behind those phone calls, Pope Francis said, “Well, you won’t take me, so I’ll get there myself,” Father Rosica continued, noting that the pope’s aides arranged the trip for the next month.

Those in attendance at the Feb. 19 lecture enjoyed hearing such anecdotes about the pope, noted Mercy Sister Marilyn Williams.

“Father Rosica made him come even more alive than we have experienced through the media so far,” said Sister Williams, who said she also appreciated the fact that Father Rosica set such stories in the context of the pope’s overarching philosophies and agenda.

“This is the only agenda of Francis: to lead people to Jesus Christ so their lives and their joy may be full,” Father Rosica said.

Many commentators are frustrated because they can’t pigeonhole the pope into a single category, yet Pope Francis’ words remain consistent with his actions, he added.

“He is not quite conservative and nor entirely progressive. His message is filled with paradoxes because life is a paradox and Christian life is a great paradox. The world is listening to him because Francis models a solid consistency, the one between his words and his deeds, and that between its current papal mission and life forever,”  he said.