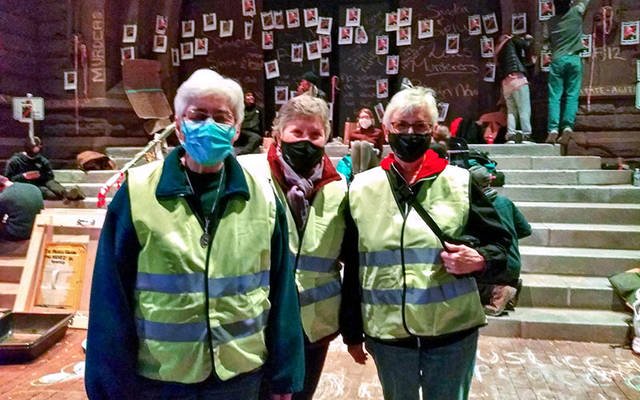 Women religious in Rochester have a long history of standing in solidarity with those on the margins of society. In recent weeks, three Sisters of St. Joseph of Rochester have found a new way to stand — quite literally — with the marginalized.

Sisters Donna Del Santo, Marilyn Pray and Barbara Staropoli spent three nights serving as peacemakers, standing between protesters and police officers at nightly demonstrations in the City of Rochester during the first few weeks of September.

Large crowds marched and gathered in the city’s streets for 20 nights beginning Sept. 2, when lawyers for the family of Daniel Prude released video footage showing Prude, a black man, being detained by officers from of the Rochester Police Department in March. The footage shows several officers restraining Prude, who was naked other than a “spit hood” covering his head. After Prude became unresponsive, he was resuscitated at the scene and transported by ambulance to Strong Memorial Hospital, where he passed away a week later on March 30. The Monroe County Medical Examiner’s Office ruled Prude’s death a homicide due to “complications of asphyxia in the setting of physical restraint.”

Protesters, led by Free the People ROC, have been demonstrating in front of Rochester’s Public Safety Building and City Hall for several weeks to demand justice for Prude. Some of the first few protests were marked by violence when police officers fired rubber bullets and pepper balls into the crowd, likely in response to to some protesters throwing things at the officers, Sister Del Santo said.

The violence at the protests troubled Sister Del Santo, so when a Rochester minister put out a call asking for individuals to serve as a peaceful presence among the protesters, she immediately signed up.

Sisters Del Santo, Pray and Staropoli joined a group of elders from Rochester’s black community and other allies who volunteered to serve as peacekeepers during the protests. The first evening they served, they stood between the barriers in front of the Public Safety Building and a crowd of hundreds of protesters who had marched from Martin Luther King Jr. Memorial Park. When a young man jumped over the first of two rows of barriers in front of the Public Safety Building, Sister Del Santo talked him out of climbing over the second barrier.

“I said we can just be here to protest. We don’t need to agitate,” Sister Del Santo remarked. “When you think about our presence and our role, that’s what we’re trying to do is be a peaceful presence and maybe squelch any behavior that could be more agitating or disruptive.”

Sister Del Santo had a similar conversation with a young man who was shouting a profane slogan about the police. She approached the man and suggested he consider choosing different words to express his feelings so that he could be a positive force.

Sister Del Santo said a commitment to standing in solidarity with others, especially the marginalized, is a part of who she is and part of the mission of the Sisters of St. Joseph of Rochester.

Eighty years ago, several local Sisters of St. Joseph headed to the segregated South and started a mission in Selma, Ala. Members of the congregation cared for those who had been beaten while marching for voting rights on March 7, 1965, dubbed Bloody Sunday, and local sisters still serve in Selma.

The Sisters of St. Joseph have been transformed by the congregation’s interactions with the community in Selma, and something similar needs to happen in Rochester, Sister Del Santo remarked.

“Our faith really calls us to be in solidarity. How do we allow ourselves to be formed and shaped by the people we stand with?” she asked, noting that as a white woman, she does not have the solutions to the current tensions in Rochester.

“You can feel enraged for another’s pain, but it’s not your pain. It’s their pain, so listen, pay attention. What are they asking of you?”