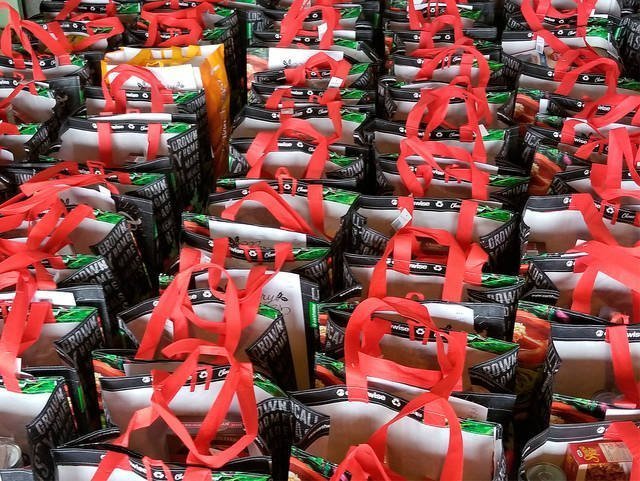 Bags containing Christmas food items for people in need are lined up in the rectory garage of Holy Cross Church in Rochester, awaiting delivery on Dec. 16 by volunteers. (Courier photo by Mike Latona)

ROCHESTER — With Ontario Beach Park and other lakefront attractions available, the area around Holy Cross Church can be considered “a destination place,” according to John Metzger.

Yet he and his wife, Sheila, acknowledged that their parish — located on the city’s northern tip — also holds a sizable share of folks in need within its boundaries. For example, they said, subsidized housing has risen notably in recent years.

“I think the reality of the neighborhood is that there’s as much poverty and homelessness as a lot of other portions of the city, but it’s unrecognized because of our location. We’re so removed from what’s thought of as the City of Rochester,” John Metzger said.

To help ease the burden of area residents, Holy Cross Parish annually provides Christmas and Thanksgiving meals for families and individuals who request them; both efforts are coordinated by the Metzgers. This past holiday season, according to Sheila Metzger, volunteers put together and delivered 84 meals for Thanksgiving and 107 for Christmas, featuring turkey, ham and an array of canned and other nonperishable items. The great majority of those meals went to folks who live within a mile or two of the Lake Avenue church.

Volunteers were busy at Holy Cross’ parish center on the morning of Dec. 15, filling bags with food that had been set out across several tables. The bags were then carried to the rectory garage, where they awaited delivery the next day by another fleet of volunteers. Also included in the delivery effort Dec. 16 were an array of handsomely wrapped gifts for local organizations, courtesy of the parish’s giving-tree initiative.

Sheila Metzger said that demand for holiday meals provided by Holy Cross has doubled in recent years. To assist in meeting this increasing need, the parish’s annual Hunger Relief Grant — provided by diocesan Catholic Charities and using funds from the Catholic Courier/Catholic Charities Christmas Appeal — has risen from $500 in 2016, to $1,000 in 2017, to $1,100 in 2018. She said the appeal money is greatly appreciated, pointing out that although Holy Cross parishioners generously donate food and cash for the holiday effort — “our parishioners are wonderful, they are just wonderful,” she remarked — they can’t cover the entire bill.

Holy Cross’ focus on feeding the hungry exists not only during the holidays, but all year long thanks to the parish’s food pantry, for which Sheila Metzger is volunteer coordinator. She noted that a group of parishioners strives throughout the year to fill requests made to the parish office. In addition, a box is situated inside the church’s northern entrance for donations of nonperishable food items and personal-care products.