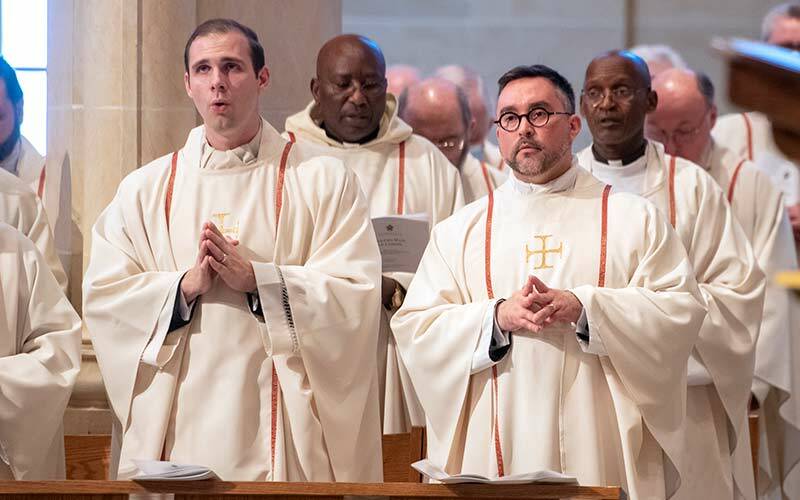 Priests of Rochester Diocese reflect on many decades of ministry

Ten years ago, a senior priest at Illinois’ Mundelein Seminary found a striking way to illustrate the need for priestly vocations. While presiding at a Mass celebrating his jubilee, the priest first thanked people for coming to the liturgy, recalled Father Matthew Jones, who was a seminarian at the time.

“Then he took his shoes off and said, ‘Now, who will fill these shoes?’ He left them (at the altar). It was kind of a moment of deafening silence,” Father Jones said.

The priest’s question — “Who will fill these shoes?” — is as relevant today as ever, and priests play a critical role in the work of cultivating priestly vocations, Father Jones said.

“The reality is that we need priests now. Everyone knows that, but they don’t fall out of the sky. They grow up from the pews,” remarked Father Jones, pastor at All Saints Parish in Corning.

The first item on the to-do list of any priest committed to encouraging vocations should be prayer, according to Father Peter Van Lieshout, rector at Rochester’s Sacred Heart Cathedral and codirector with Father Jones of priesthood vocation awareness for the Diocese of Rochester.

“Actually beseech the Lord for vocations to the priesthood,” Father Van Lieshout said.

Praying for vocations is paramount, yet also important is the realization that few men will discern a vocation if they are not already coming to Mass, Father Van Lieshout said.

“You look out at a Sunday Mass and you know all your people,” he said. “A priest should be able to look out and know: ‘Here are my best vocation prospects. Here are young men who come to Mass every Sunday, they pray.’”

Unfortunately, many pastors have observed a significant lack of young men in their early- to mid-20s in the pews, Father Jones said.

“It’s hard to pick from a crop that almost doesn’t exist,” he said.

Yet there is some good news, according to Father Jones, who said many families in recent years seem to be taking greater responsibility as their children’s first teachers of the faith. These family units, sometimes referred to in church teachings as “domestic churches,” provide a solid foundation in the faith where vocations — whether to the priesthood, religious life or married life — will flourish, he said.

Parishes build on strong family foundations by offering quality faith-formation, youth ministry and sacramental-preparation programs, he added, and priests should spend time getting to know families involved in these programs.

“The more time you spend with these youths, with their families, the more they’ll ask questions, ask for guidance,” he said.

Taking his own advice, Father Jones — with the help of two parent chaperones — brought 10 young men with him to Rochester for the diocesan Solemn Mass of Chrism at Sacred Heart Cathedral April 12. The teens watched Bishop Salvatore R. Matano bless the sacred oils that will be used in parishes throughout the year and witnessed dozens of diocesan priests renewing their priestly vows.

“That was really an effort to help them see the bigger picture: the diocese, the priests renewing their promises, and opening their eyes to a future possibility,” Father Jones said. “How can someone feel called to something if they don’t know what it is?”

Spending time with trusted priests at his childhood parish helped open Father Eugene Weis’ eyes to his priestly vocation many years ago. Father Weis, who in June will celebrate the 60th anniversary of his ordination, said Father John Morgan taught him how to serve on the altar at Rochester’s Blessed Sacrament Church and also helped him hone his baseball skills. Spending time with Father Morgan on the ball field made the priesthood seem more accessible, he said.

“He’s human, too, even though he has followed a call from God to follow in Christ’s footsteps,” Father Weis remarked.

Father Weis kept that lesson in mind after his ordination. He joined volunteer fire departments and softball teams in many of the communities he served and said he hopes his example served to humanize the priesthood for his fellow firefighters and ballplayers.

“I think that they began to see how a human being can be dedicated to the Lord,” he said.

Father Richard Brickler likewise said he has tried to live his vocation in a way that would inspire others to consider the priesthood.

“It’s important for us to try to be positive, upbeat and enjoy what we’re doing, and not present a sad or unfriendly personality,” noted Father Brickler, who this June will celebrate the 61st anniversary of his ordination.

Priests should go a step further by inviting men who would be good priests to consider the vocation, he said.

Father Jones wholeheartedly agreed. Encouraging young men to consider the priesthood, or even asking if they’ve ever thought about it, can “make a world of difference,” he said

“That’s what happened with me. Someone who I knew very well asked me directly. I’ll never forget that,” he said, noting that the encounter planted the seed that eventually developed into his vocation.

The germination process can take a while, Father Van Lieshout said, noting that in his teens, he regularly turned down his pastor’s invitations to attend vocations events. He began discerning a call to priesthood years later, while he was studying at Franciscan University of Steubenville in Ohio.

Men who are invited “may say no, but that doesn’t mean the message isn’t somehow getting through,” he said.

And while some young men may be inspired by the example of a happy priest, others may be moved to action by learning how great the need for priests is, Father Van Lieshout added.

“They need to be called to heroic sacrifice for the sake of the church,” he said. “They need it posed to them as a challenge in a time of grave need, something that’s worth sacrificing for.”