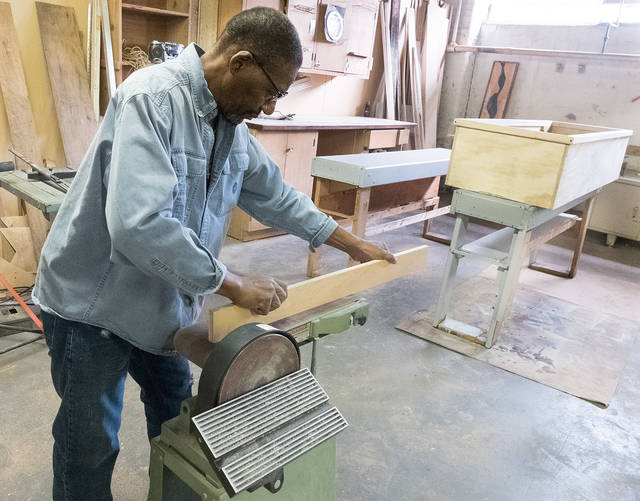 St. Joseph’s House of Hospitality volunteer Richmond Futch uses a belt sander to finish a board for a casket he was making Oct. 24. (Courier photo by John Haeger) 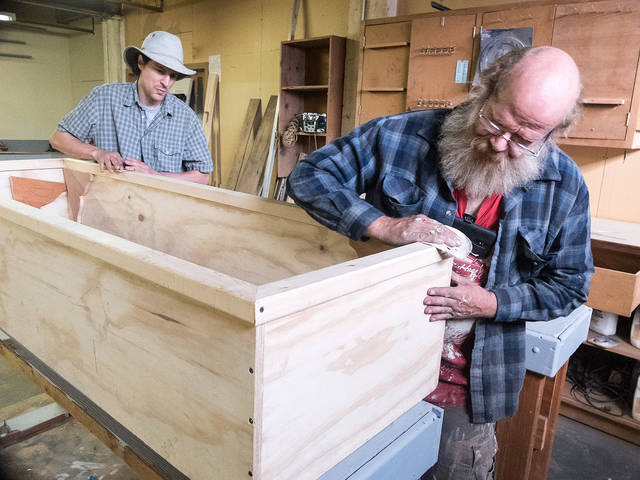 ROCHESTER — A spirit of love and caring for others permeates the work of a new project undertaken by members of St. Joseph’s House of Hospitality and Dorothy Day House.

The Memorials Co-op pilot program will provide social skills and on-the-job training for the area’s homeless residents through the production of caskets, urns and funereal items for people or pets, explained Randy McDonald, a program director at St. Joseph’s House of Hospitality. Some of the workers will be tenants of Dorothy Day House, located across from the house of hospitality on South Avenue, that provides housing to get homeless residents back on their feet.

Tim Sigrist, board president for St. Joseph’s House of Hospitality, said the new program is important because providing housing only solves part of the problem for the homeless. They also need to learn time management and trade skills, which the Memorials Co-op can provide, he noted.

“This is a holistic training program that helps people who have been disenfranchised (to) identify goals that address their needs,” McDonald said. “We are all here to give something and receive something.”

The catalyst for the Memorials program was Sister of Mercy Grace Miller, founder of the homeless shelter the House of Mercy, who had approached St. Joseph’s House of Hospitality with the idea of making wooden caskets for families who couldn’t afford to bury their loved ones, McDonald said.

“We’ve been pursing this (project) for years,” he added.

Getting it off the ground took time in terms of fundraising and finding a central location for the workers, McDonald and Sigrist explained.

Sister Miller said she is grateful they forged ahead with the project, as families have been asking the House of Mercy for financial assistance for burials since Monroe County officials cut the burial funds it provides for lower-income families more than a decade ago.

“So, we were trying to think of cheaper ways for people to have dignified burials,” she said.

To help provide such dignified burials, the Memorials program moved forward this year with $5,000 in seed money from St. Joseph’s House of Hospitality’s board of directors, McDonald said. Initially, the program’s planning group had hoped to move into a woodshop located in rented space at the Hungerford building on East Main Street in June, he said. The program moved into its shop this fall and was to start production in December in Building 1 of the Hungerford complex.

Even before the program had its own space, work on designing memorial prototypes began about a year ago. McDonald said he collaborated with St. Michael’s Woodshop to build the prototype of a casket that a local family subsequently used. He built a second prototype with Don Skillman, who will serve as manager of the Memorials program. It was built out of plywood that was used in a community march and later reinforced and used for another burial.

A third prototype was housed at the Dorothy Day House in October until being moved to the new woodshop where it can be reproduced on a planned assembly line, McDonald said. The Memorials program planning group also expects to make ceramic urns and decorative items for the caskets.

One of those people is Jenna Sonveso, who had been volunteering as a building maintenance worker at Dorothy Day House for nine months before getting involved in the Memorials program. She helped create the prototype that will be used for the planned assembly line.

She came to the house through the Monroe County Work Experience Program (WEP), a joint initiative between the county and RochesterWorks that provides individuals with the skills and experience needed to become employed and self-sufficient, according to monroewep.org.

Through her work at Dorothy Day House, she learned many skills, such as repairing windows and working on heating systems. She will oversee the pet memorials and caskets for the Memorials program.

“I am into hands-on work,” Sonveso said. “And I do love woodworking. I also love the fact of giving back to the community and training people. ‚Ä¶ I think that is so important, to get people back into the workforce and back into society.”

The caskets made by the program participants will be sold for a $700 donation, McDonald said. Or, if church groups or individuals want to donate funds or come to the woodshop and build some caskets as community service projects, those caskets can be given to indigent families.

Skillman said he will provide training to anyone who walks in and wants to participate, no matter their skill level. He also will work with whatever schedule they are looking for, he added.

“I take all the underdogs, because I was always an underdog,” Skillman remarked.

When he met Sigrist more than a decade ago, Skillman said he decided to get involved with St. Joseph’s House of Hospitality and helped secure the space in the Hungerford building where he used to make prefabricated parts for vending machines.

“We’re trying to get guys and train them and hope they go somewhere else and get a job,” he added.