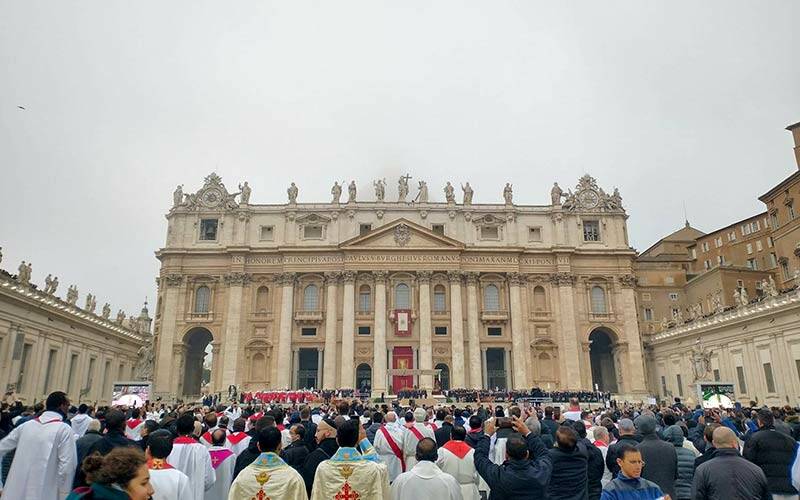 James Muscatella attends the funeral Mass for Pope Benedict XVI in St. Peter’s Square Jan. 4. Muscatella is a seminarian for the Diocese of Rochester who is studying at the Pontifical North American College in Rome. (Photo courtesy of James Muscatella)

An estimated 50,000 people filled St. Peter’s Square for the funeral Mass of Pope Benedict XVI, and among the crowd was Diocese of Rochester seminarian James Muscatella.

Muscatella, a third-year theology student at Pontifical North American College and Pontifical University of Saint Thomas Aquinas in Rome, Italy, attended the funeral Mass Jan. 5. He also had the opportunity to pay his respects to Pope Benedict when the pontiff’s body was lying in state in St. Peter’s Basilica.

“Really, there was no other place in that moment that you rather be,” said Muscatella, 29, a parishioner of Parish of the Holy Family in Gates.

“It worked out really well that I would be in Rome with plenty of comfortable time to both attend some of the viewing hours and attend the funeral Mass,” he said.

A quick but worthwhile visit

Early in the morning on Jan. 4, Muscatella and his friend, Noah DaSilva, a seminarian for the Diocese of Providence, R.I., went to St. Peter’s Basilica to pay their respects to Pope Benedict. Muscatella said people from all over the world stood in line to get into St. Peter’s Basilica, from priests, to women religious, to tourists who just happened to be in Rome on vacation. Muscatella said mourners had to go through two security checkpoints before entering the basilica, and then once inside, everyone was ushered down the center aisle where Pope Benedict was lying in state. Once reaching the front, Muscatella said security would tell people avanti, avanti (forward, forward), as they did not want anyone stopping.

“It was very beautiful, he was there with his papal vestments with his mitre on, and there was a Swiss Guard in their full color uniform standing on either side at attention,” he said. “It was a beautiful, solemn, quick, but a nice thing to spend a little time with him.”

Muscatella and DaSilva were able to go to an adjacent chapel within the basilica to say a few prayers before they left.

“It was a quick visit, but one definitely worth going,” he added.

Pope Benedict’s funeral was celebrated the following morning in St. Peter’s Square. At 6:05 a.m., Muscatella and his friend, Nick Martell, a seminarian for the Archdiocese of Portland, Ore., left Pontifical North American College to take the 10-minute walk to St. Peter’s Square. They arrived by 6:15 a.m, a half-hour before the gates opened, and were in their seats by 7 a.m., more than two hours before the funeral Mass started.

“It was an early morning,” Muscatella said with a laugh.

One of the things that struck Muscatella was the diversity of the crowd in attendance. Most notably, since Pope Benedict was from Germany, Muscatella said said there were many Germans in attendance wearing traditional garb. Some even carried flags and had brass instruments with them. Seated not far from Muscatella was a group from France, whose members were praying the rosary in French before Mass. He also ran into classmates from Panama and Ireland, and he even saw a Buddhist monk among the crowd.

“It was very beautiful to see the whole world coming together to pray for the former Holy Father,” he said.

There were many moments throughout the Mass that they were powerful, Muscatella noted. One in particular, he recalled, was at the end of the liturgy when the pall was being taken out. Muscatella said the crowd started chanting santo subito (saint immediately) and Pope Benedict’s name. He said he found it distracting at first, but then he looked up at the screens and he saw Pope Francis with his hand on the casket.

“A last prayer, a last moment of contact with his brother, and with that and the crowd around me shouting and praying, it was quite the experience,” he said.

Pope Benedict’s funeral marked the first time since 1802 that a pope has celebrated the funeral of his predecessor.

“It was a great show of the continuity of our faith and the church that Christ established that one man was there to pray for his predecessor,” Muscatella said. “A sitting pope there giving thanksgiving for the work of a pope that came before him, it was really something to see.”

Photos below courtesy of James Muscatella