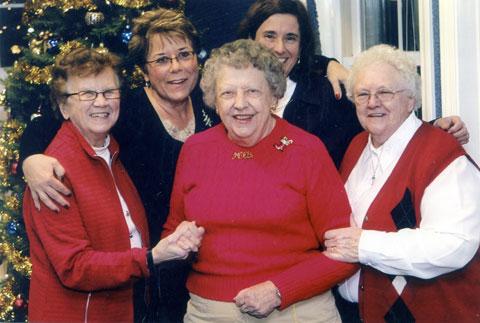 Dorothy Miller (center) poses with friends during a Dec. 29, 2009, party she threw to thank her many friends and supporters

ROCHESTER — Although she no longer scours the roads of Irondequoit every day searching for discarded bottles and cans to raise money for the poor in Papua New Guinea, Dorothy Miller certainly has not given up raising money for church missions.

Miller’s history of helping others dates back 60 years to 1950, when her sister asked her to stop by the Holy Angels Home, a Rochester home for troubled teenage girls. Miller’s sister wanted to give the Sisters of Our Ladies of Charity, who operated the home, a donation in exchange for Christmas cards. That weekend at Mass, she was inspired to get involved.

"The Lord spoke to me and said, "Go back and see if you can help them,’" Miller recalled.

She returned to ask the sisters if they would like her to sell the Christmas items door to door as a fundraiser for the home. They were delighted, and Miller set out selling in her free time after work.

Door to door she walked, selling until late at night. In the first six weeks, she netted $800 for the home. Miller, who now lives at Chapel Oaks at St. Ann’s Community, continued doing the sales for several more years, and a fundraising machine was born.

Pam Schultz, parish secretary at Holy Trinity, said Miller has been unmatched in her commitment, loyalty and generosity and has purchased for the parish everything from vestments to telephones. Schultz noted that Miller has deep roots with the parish: her grandparents were the first couple to be married at Holy Trinity, and some of her relatives were the first people to be buried in the parish cemetery. Schultz said Miller generously gave her time as part of Trinity Life Center’s planning committee and routinely contributed her euchre tournament winnings toward the project.

"She was always willing and always promoting and encouraging and supporting everything that we did," Schultz said.

Miller did all these things as part-time efforts. As a full-time job, she worked for more than 40 years at Eastman Kodak Co., and for 15 of those years she assisted renowned nature photographer Jeannette Klute on a dye-transfer process to make high-quality prints of photographs. Miller retired in 1982.

She said she got started picking up bottles and cans in 1989 through the example of her friend, Eloise Weber, who picked up a dirty bottle for the nickel deposit. Soon she began to build a weekly route to homes and businesses to gather bottles and cans.

She said she collected nearly $80,000 in deposits — well over 1.4 million bottles and cans — during the eight years that she picked them up full time. She said she had a route she would walk each day, and friends saved the bottles and cans for her. At the end of each month, she wrote a letter giving credit to all who participated.

It was her way of keeping contact with the many friends who had supported her. In December, Miller also showed appreciation for some of her many friends by hosting a Christmas party she dubbed "monkeying around," during which she thanked all those who had been special in her life.

"All my life is providential," Miller remarked.

When asked why she enjoys helping others, Miller cited the fulfillment she gets from it. She also noted that she didn’t start out to raise thousands for missions or the Holy Angels home. One project grew into another project, she said.

"Put your life in God’s hands like putty," Miller said. "He’ll work through you, with you, in you."