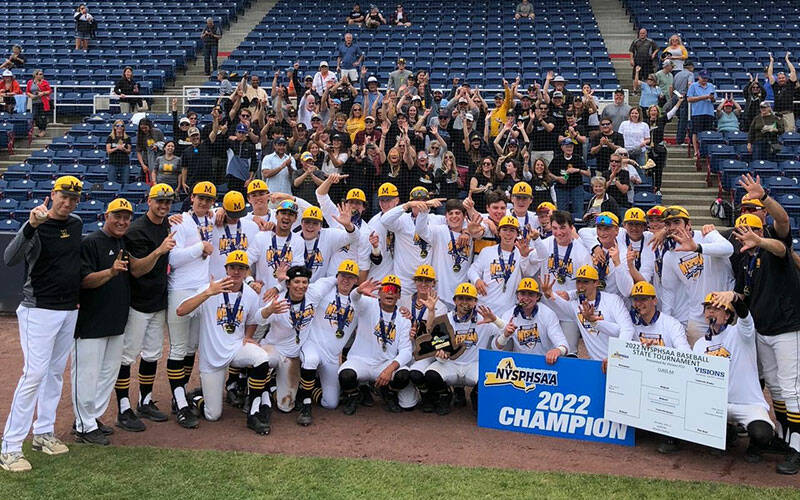 McQuaid Jesuit’s 2022 baseball team barely broke a sweat in three of its six post-season games, winning by a combined 37 runs. It was a much different story in the Knights’ other three contests, decided by a total of four runs.

Yet what mattered most, whether blowout or squeaker, were the final results — all victories, paying off in a state championship.

The Knights end the year as the best squad in New York state after their 4-2 win over Fayetteville-Manlius in the state Class AA title game June 11. This marks their second straight state crown; they also won the championship in 2019 before the coronavirus pandemic forced cancellation of the 2020 and 2021 tournaments.

McQuaid’s state title was part of a successful spring sports season for Catholic high schools in the diocese. Also included were a number of sectional individual champions as well as sectional team finalists.

McQuaid, representing Section 5 in the state final, broke a 1-1 tie with two runs in the bottom of the fifth inning and held on from there against Fayetteville-Manlius of Section 3. The Knights were led by Matt Wilmarth, a backup starting pitcher who surrendered just one run over five innings and recorded seven strikeouts. Reliever Will Russotti gave up one run in the final two innings as McQuaid held on for the state-championship win.

The Knights had reached the title game via a 7-6 win over Massapequa of Section 8 in state semifinal play June 10. McQuaid took a 3-0 lead on a three-run homer by Will Taylor in the top of the first inning, then fell behind 4-3 before going ahead for good, 7-4, with a four-run fourth.

Preceding that win was a 13-1 rout over Orchard Park of Section 6 in state quarterfinal play June 4. The game lasted just five innings, rather than the customary seven, due to a “mercy rule” invoked when a team is winning by 10 runs or more after the fifth inning.

McQuaid had earned its way into the state tournament with a 2-1 win over fifth-seeded Victor in the Section 5 Class AA final played May 31. Taylor went the distance on the mound, throwing a three-hitter and striking out 11. Single runs in the first and second innings proved to be enough as the second-seeded Knights earned their third sectional crown in six years, adding to their 2017 and 2019 titles.

Prior to its sectional title victory, McQuaid recorded a 19-2 win over No. 7 Franklin/WOIS in quarterfinal play May 25, followed by an 11-3 decision over No. 3 Rush-Henrietta in semifinal action May 27.

• Elmira Notre Dame baseball reached the Section 4 Class C final. The top-seeded Crusaders won 5-0 over N0. 9 Newark Valley in quarterfinal play May 23, as pitcher Owen Stewart threw his fourth no-hitter of the year with 20 strikeouts, then went on to a 9-5 semifinal win over No. 4 Trumansburg May 25. In the title game May 27, the Crusaders were defeated, 7-4, by second-seeded Lansing in eight innings. The Crusaders were down 4-2 with two outs in the seventh and tied the score at 4-4 to force extra innings before surrendering three runs in the eighth.

• Elmira Notre Dame softball advanced to the Section 4 Class C championship game. The No. 3-seeded Crusaders started out with an 8-5 win over No. 6 Sidney in quarterfinal action May 24, then won 6-5 over No. 7 Tioga in a semifinal game May 26 as ND went out to a 6-0 lead and hung on for the victory. In the championship contest May 28, the Crusaders were blanked, 4-0, by No. 1 Greene.

• Aquinas Institute girls’ lacrosse reached the Section 5 Class D final. The Little Irish, seeded No. 1, won 19-2 over No. 8 Gananda/Marion in the quarterfinals May 23, then edged No. 4 Penn Yan by a 12-11 count in semifinal play May 25 behind three goals each from Corinne Barden and Bailey Cooper. AQ was defeated by No. 3 Palmyra-Macedon in the title contest, 9-8, June 1.

• In girls’ golf, Our Lady of Mercy’s Julia Zigrossi earned a fourth-place finish at the state championships held June 5-6 at Mark Twain Golf Course in Elmira. Zigrossi shot rounds of 78 and 73 for a seven-over-par total of 151. Mercy teammate Sophie Cellura finished in a tie for 11th at 78-83/161. Zigrossi and Cellura had qualified for states by placing first and second, respectively, at the Section 5 tournament last October.

• In girls’ track, Elmira Notre Dame’s Makenna Keough won three events at the Section 4 Class C championships May 25, placing first in the 100-meter hurdles, long jump and triple jump. Other first-place finishes came from Piper Young in the 1,500 run as well as the 1,600 relay, helping the Crusaders to a second-place showing in team scoring. At the Section 4 state qualifier June 1-2, ND posted first places by Keough (100 hurdles), Amanda Simpson (400 run) and the 1,600 relay. At the state meet June 10-11, the 1,600 relay placed seventh in Division 2 and Keough took eighth in the hurdles, also in Division 2.

• Also in girls’ track, Aquinas Institute’s Maya Parks won the long and triple jumps at the Section 5 Class B1 meet May 28. She went on to capture the triple jump at the sectional Meet of Champions state qualifier June 3. At states, Parks surged to a second-place showing in the triple jump in Division 2 and eighth overall.

• In boys’ track, Aquinas Institute’s Gio Gonzalez won the 400 meters at the Section 5 B1 championships May 28. He then placed third in that event at the state qualifier June 3 before finishing fifth in Division 2 at the state meet June 10-11.

• Bishop Kearney boys’ golf earned the No. 1 seed in the Section 5 Class D tournament. The Kings defeated No. 8 Batavia Notre Dame and No. 4 Arkport/Canaseraga before losing, 4-2, to No. 2 Caledonia-Mumford in the final May 26.