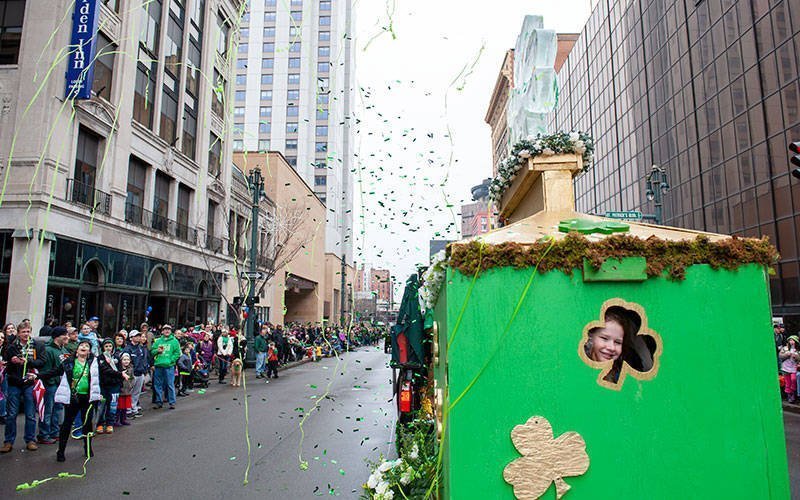 A parade float is seen during the 2015 St. Patrick’s Day Parade in Rochester. (Courier file photo)

Instead, organizers are hoping would-be parade-goers will instead tune in to WROC-TV, Rochester’s CBS affiliate, for a virtual parade. The virtual parade will include footage from the 2019 parade as well as a brief history of the Rochester parade, paired with music from local Irish bands and a special segment honoring individuals from the local Irish community who passed away in recent months. The virtual parade also will highlight the individuals and organizations who had been slated to be honored during the 2020 parade, which was cancelled at the last minute when cases of COVID-19 began rising in the Rochester area, according to Chris Shalvoy, president of the Tops Rochester St. Patrick’s Day Parade.

“Last year we pretty much made the decision (to cancel) Thursday morning for a Saturday parade,” Shalvoy recalled. “That’s two days. There was really nothing that could be done to turn anything around last year.”

The decision to cancel the 2020 parade was bitterly disappointing, not only to the thousands who’d hoped to attend, but also to the committee of volunteers, about 90 percent of whom are Catholic, said Shalvoy, who belongs to St. Jerome Parish in East Rochester. To many people, especially those of Irish descent, the parade is about more than “green beer and party time,” he said.

“I tip a pint of Guinness too. I have a lot of fun running around, but the point is this committee has really tried to still pay respect for what that holiday is and means to the Irish people. We take a lot of traditions here in the States and turn them into what we want to, but this one means a lot to us from a religious standpoint,” Shalvoy said.

Bishop Salvatore R. Matano typically celebrates a Mass for the committee members before the start of the parade each year. This year, the Mass will be at St. Joseph Church in Penfield, and Shalvoy expects the committee members will be joined by local members of the Ancient Order of Hibernians, an Irish-Catholic fraternal organization, as well as local members of the Ladies Ancient Order of Hibernians.

When the decision was made to cancel the 2020 parade last year, organizers at first assumed the parade would return to normal the next year, but as the months wore on they realized this was probably not the case.

“We came to the realization that it just wasn’t going to happen in time. Around September or October, we decided to look at alternatives,” Shalvoy said. “We do have to be granted a permit from the city, and at that point in time, large gatherings of any sort weren’t being allowed.”

The parade is the largest single-day event in the City of Rochester each year, and it’s not unusual for 3,000 people to walk in the parade with local marching bands, dance schools and other organizations, Shalvoy said. The number of marchers, however, is dwarfed by the number of spectators who line the parade route, especially if the weather cooperates, he added.

“A couple years ago, we had 120,000 people downtown for the parade,” he said, noting that it would be very difficult to enforce current social-distancing regulations and other COVID-19 safety guidelines with such a large crowd in an open, outdoor space.

Organizers hope the parade will be able to return to the streets of downtown Rochester in 2022, although they’re not yet sure what, if any, changes may need to be made to the parade’s format.

“We don’t know what types of regulations will be in place. There may be restrictions on the amount of people, there may be distancing requirements, there may be varying lineup considerations,” Shalvoy said.

The committee members will start working on next year’s parade just days after this year’s virtual parade airs, he said. They spend months working with sponsors, as the parade is funded solely by donations from these sponsors, Shalvoy said, noting that many people don’t realize the marching bands are paid to participate in the parade.