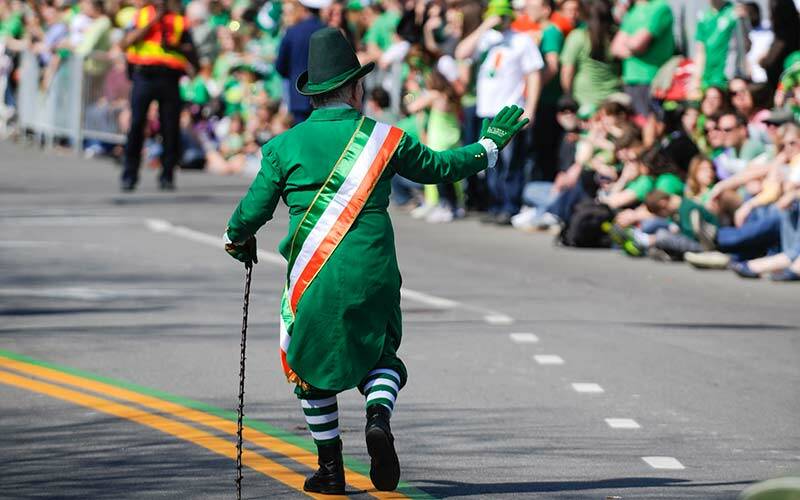 The St. Patrick’s Day Parade will return to downtown Rochester March 12 year after a two-year hiatus caused by the COVID-19 pandemic and resulting social-distancing regulations.

The parade will begin at 12:30 p.m. at the intersection of East Avenue and Alexander Street in Rochester. Marchers will follow East Avenue to the Liberty Pole, then head west down Main Street. The parade will end at the corner of Main and Fitzhugh streets.

“The original parades were run by the Ancient Order of Hibernians, a Catholic men’s order that was started in Ireland to protect priests almost 300 years ago. Once in the states, it assisted immigrant families in the ways of their new country,” explained Chris Shalvoy, past president and current committee member of the Tops Rochester St. Patrick’s Day Parade.

The Rochester region has been home to the both the Ancient Order of Hibernians as well as its sister organization, and it seemed fitting to honor both groups during the parade, Shalvoy said.

“With the parade’s ‘rebirth’ after a 2 year hiatus, this is a great way to tie our faith into a modern-day Rochester event,” he said.

Parade-weekend festivities begin March 11 with Irish Night at the Blue Cross Arena during the Rochester Americans’ home hockey game against the Syracuse Crunch, Shalvoy said. The Amerks will wear shamrock-themed jerseys, and game-worn jerseys will be raffled off to offset some of the parade’s costs. Irish dancers, pipers and musicians will perform in the arena’s atrium, and the Irish national anthem will be sung before the game, which will begin at 7:05 p.m., he added. Tickets may be purchased on the Amerks’ website.

The public is invited to attend a pre-parade Mass at 9 a.m. March 12 at St. Mary Church, located at 15 St. Mary’s Place in Rochester, Shalvoy said.