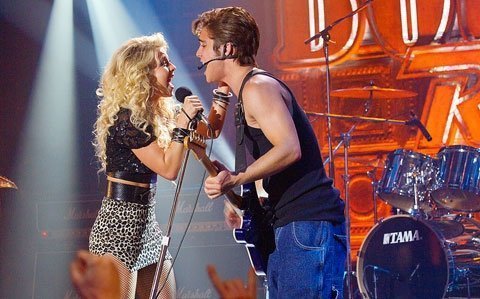 Director Adam Shankman’s screen version of Chris D’Arienzo’s hit Broadway paean to the glories of Reagan-era rock — set in 1987 and penned by D’Arienzo in collaboration with Justin Theroux and Allan Loeb — at least has the good sense never to take itself too seriously.

Such lighthearted self-deprecation may help to redeem the picture’s glaring aesthetic defects — an obvious plot arc and stick-figure characters prominent among them. But it does nothing to mitigate the skewed sexual morality or faith-averse attitude implicit in the story.

The point of it all, it seems, is to string together big-hair band standards that some viewers, at least, will remember with warm nostalgia, while also embodying some of their lyrics. A case in point of the latter motif: our heroine, Sherrie Christian (Julianne Hough).

She’s an aspiring singer whose opening-scene cultural hegira from the Midwest to Los Angeles (city of her dreams, natch) makes her the embodiment of the "small-town girl" celebrated by Journey in their power ballad, "Don’t Stop Believin’."

The first person Sherrie encounters in Tinsel Town mugs her. The second — literally — comes to the now-distressed newcomer’s rescue by getting her a job as a waitress at the Bourbon Room, the legendary headbangers’ nightclub where he toils as a junior bartender. This good-hearted Angelino (born and raised in South Detroit) is one Drew Boley (Diego Boneta), a lad with show biz ambitions of his own.

As the Judy Garland and Mickey Rooney of the Def Leppard set fall for each other — and, as we’re shown, albeit briefly and nongraphically, tumble joyously into bed together — plot complications unfold around them.

Dennis Dupree (Alec Baldwin), the Bourbon Room’s happy-go-lucky owner, is struggling to keep the place open. His chances of doing so largely depend on a headlining appearance by debauched megastar Stacee Jaxx (Tom Cruise). But Jaxx, who travels with cases of Jack Daniels, an aggressive pet monkey and a stable of scantily clad groupies, has an increasingly distant relationship with reality, a fact that’s being exploited by his unscrupulous manager Paul Gill (Paul Giamatti).

Another worry for Dupree comes in the person of Patricia Whitmore (Catherine Zeta-Jones), the puritanical wife of La-La Land’s crusading right-wing mayor. She’s determined to clean up the Sunset Strip, beginning with the Bourbon Room, so she leads daily sign-waving protests outside Dupree’s doors.

The notion of a red state-style pressure group successfully manipulating the electorate of Los Angeles is, of course, absurd. So too is the sight of Whitmore and her uptight, exclusively female followers stomping their way through Pat Benatar’s "Hit Me With Your Best Shot," sung to a portrait of Jaxx.

They do this routine, however, in the setting of a church that is unmistakably Catholic (Jaxx’s image is, inexplicably, propped up on the altar), while two of the figures at the barricades with Whitmore are traditionally dressed nuns. So no amount of campy ridiculousness can disguise the underlying message: As the hidden behavior of Whitmore and her husband eventually make clear, religiously motivated moral conservatives are all repressed hypocrites.

Those on the other side of debate are, to say the least, more relaxed. Our first sight of Jaxx has him in bed, gradually emerging from the pile of female bodies under which he has spent the night. And, when two male characters proclaim their love for each other — cue REO Speedwagon’s "Can’t Fight This Feeling" — and eventually kiss, audiences are meant to laugh, but also to nod approval.

The film contains a negative treatment of religion, misguided values — including a frivolous view of homosexuality, acceptance of premarital sex and a comic portrayal of aberrant sexual behavior — rear and partial nudity, a couple of uses of profanity, and some crude and crass language. The Catholic News Service classification is O — morally offensive. The Motion Picture Association of America rating is PG-13 — parents strongly cautioned. Some material may be inappropriate for children under 13.