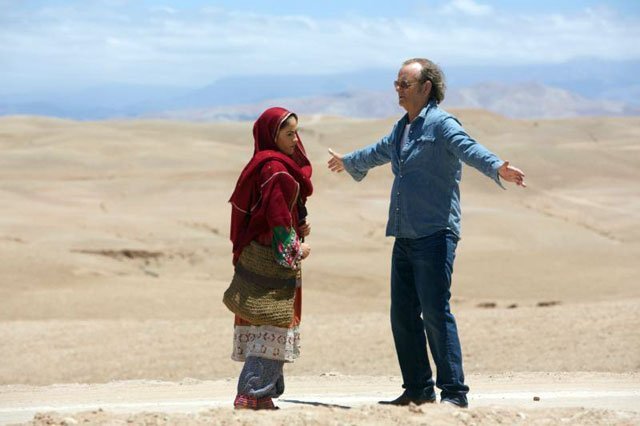 Leem Lubany and Bill Murray star in a scene from the movie "Rock the Kasbah." The Catholic News Service classification is A-III -- adults. The Motion Picture Association of America rating is PG-13 -- parents strongly cautioned. Some material may be inappropriate for children under 13.
By Kurt Jensen
Catholic News Service
NEW YORK (CNS) — The idea behind "Rock the Kasbah" (Open Road) is that cheerful, wisecracking show-business survival skills can overcome peril in exotic settings.
It’s a cherished old notion. Decades ago, it worked for Bob Hope and Bing Crosby in their "Road" comedies — films that portrayed any foreign culture the boys happened to pass through as inherently funny.
Such a dubious premise can hardly survive in a modern context. So it’s no surprise that director Barry Levinson’s story about fast-talking, down-on-his-luck music manager Richie Lanz (Bill Murray) — who’s off on the road to Kabul, Afghanistan, and having a wonderful time — reeks of all sorts of unpleasantly outdated thinking.
Screenwriter Mitch Glazer’s script trivializes the violent horror of war, for starters. It also stereotypes devout Muslims as latent murderers. And that’s not to mention the pervasive corruption of Afghan society whereby no one is willing to do the right thing without cynically demanding a percentage of the resulting spoils.
The first two items probably weren’t on Glazer or Levinson’s conscious agenda. But viewers won’t need an excess of political correctness to feel the jarring potholes along this bumpy journey — or to recoil from one-liners that land like dud shells.
Working out of a crummy motel-room office in Van Nuys, California, veteran manager Richie appears to have reached the end of his run, but refuses to admit it. "This is not forever," he tells one of his clients, lounge singer Ronnie (Zooey Deschanel). "This is right now."
Opportunity arrives with the offer to Ronnie of a USO tour in Afghanistan. Despite Richie’s assurance that Kabul is "like Aspen, only in wartime,"
Ronnie is so horrified at the mere sight of turbaned men that, with the help of mercenary Bombay Brian (Bruce Willis), she quickly bolts from their hotel, taking Richie’s passport and all his money with her for good measure.
Two rogue — and transparently dishonest — arms dealers, Nic (Danny McBride) and Jake (Scott Caan), propose a deal to remedy the situation. They’ll get Richie a temporary passport and considerably more money if he’ll just make a quick weapons run to a warlord’s militia. Naturally this effort, too, goes astray, leaving Richie stranded in the wilderness.
There, on a moonlit night, he hears the pure voice of Salima (Leem Lubany), a teenage Pashtun girl, singing "Trouble" by Cat Stevens (now Yusuf Islam). Surely this is fate?
"Allah gave me this voice," Salima tells Richie. "It’s a gift," he agrees. "But I want 20 percent."
Richie spends the rest of the film angling to have Salima appear on — and win — "Afghan Star," the local version of "American Idol." To do so, he has to tackle her conservative family as well as the cultural taboo against women singing in public.
He’s aided in these efforts by Merci (Kate Hudson), a goodhearted prostitute whose kindly nature doesn’t prevent her from demanding a considerable share of Salima’s winnings for herself.
"We have a saying," Richie slickly informs a group of Muslim elders. "The Lord works in mysterious ways."
Equally opaque, it might be pointed out, is the reasoning that led to this comedy’s existence.
The film contains scenes of drug use, verbal and visual references to sexual activity, fleeting profanities and frequent crude and crass language. The
Catholic News Service classification is A-III — adults. The Motion Picture Association of America rating is R — restricted. Under 17 requires accompanying parent or adult guardian.
– – –
Jensen is a guest reviewer for Catholic News Service.
Copyright © 2023 Catholic News Service, Inc. All rights reserved. Linking is encouraged, but republishing or redistributing, including by framing or similar means, without the publisher's prior written permission is prohibited.