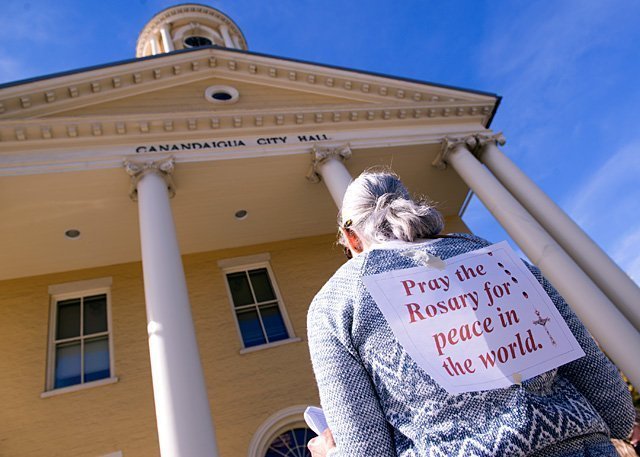 Tula Warchol prays the rosary during an Oct. 15 rally outside of Canandaigua City Hall.

Motorists traveling through the Finger Lakes region on Oct. 15 may have noticed something unusual: more than 100 people praying the rosary out loud and outdoors in at least six public locations in the area.

Rosary rallies were held in Aurora, Canandaigua, Geneva, Newark and Ontario as part of America Needs Fatima’s annual Public Square Rosary Rally Crusade. This year more than 16,300 rallies were held throughout the world, according to America Needs Fatima, which is a national organization that strives to promote Our Lady of Fatima’s message of prayer and penance. Mary’s final apparition to three Portuguese shepherd children in Fatima was on Oct. 13, 1917, so each year the organization schedules the rallies for the Saturday closest to Oct. 13.

These rallies take place in public places because participants are not only praying, but also providing public witness to their faith and their belief in the power of prayer, according to Joan Kuter, coordinator of the rally held on Main Street in Ontario.

"We aren’t supposed to be hiding our Catholicism or Christianity under bushel baskets. We’re supposed to be out in the open, and I think that’s appropriate. I think it’s important," said Kuter, who belongs to St. Maximilian Kolbe Parish in Ontario, Sodus and Sodus Point.

Thirteen people attended the Ontario rally, which, like the other rallies held around the world, began at noon local time. Over the course of the next 50 minutes, participants sang hymns — including one in Latin — and prayed the rosary as well as several other prayers, including a Litany of the Blessed Virgin Mary.

"A lot of heads turned as people were passing by. It was a beautiful day and their car windows were down," said Kuter, who has coordinated a rosary rally each October since 2010.

"It’s just such a powerful thing to be a public witness," added Rose Moser, who coordinated one of two rosary rallies held in Canandaigua Oct. 15.

Moser and 15 other people prayed the rosary in front of St. Mary Church, which is located at the corner of Main and Gibson streets and is one of St. Benedict Parish’s two worship sites. They were joined by several Fourth Degree Knights of Columbus, including Moser’s husband.

"He could see people making the sign of the cross in their cars as they drove by, and giving the thumbs up," Moser said.

Just a few blocks down Main Street, fellow St. Benedict parishioner Marguerite Fontaine led 10 other people in praying the rosary in front of Canandaigua City Hall. Fontaine has been organizing rosary rallies in Canandaigua for several years, said Moser, noting that she admired Fontaine for the courage it took to pray publicly in front of city hall.

"There’s a little risk element involved in going public with your prayer, especially in today’s culture," agreed Tonia Long, who organized the Oct. 15 rosary rally held in Geneva’s Bicentennial Park. "But when you go out on a limb for God, he’ll always catch you. He’s always there for you."

Long, who belongs to Our Lady of Peace Parish in Geneva, said she was thrilled by the turnout at the rally, which drew between 70 and 75 participants of all ages, including children and teens. Many of the participants were members of the parish’s Women of Peace group, but a large number of men participated in the rally as well, Long noted.

Christians need to bring the power of prayer to the public forum, which is something the pro-life movement has been doing for years, Long said, referring to the annual March for Life in Washington, D.C. Such public prayer is hardly a new idea, she added.

"A lot of people think prayer is something you do in your home or in your church and you don’t bring it out to the public, but actually the church has a long history of public prayer," Long said, noting that people have often gathered to pray in both times of celebration as well as times of trial.

The adults who participated in the rosary rally in Geneva talked at length about the need for prayer in the face of the many challenges and "moral crises" facing the world these days, Long said.

"We’ve got to turn back to more of a divine solution, and you can really find that in the Fatima messages," Long said. "(Mary) said, ‘My immaculate heart will be your refuge and the path that will lead to God.’ … I think every person in the world, whether they know it or not, is looking for that path to God, and when we find it, we’ll find that peace we’re looking for."