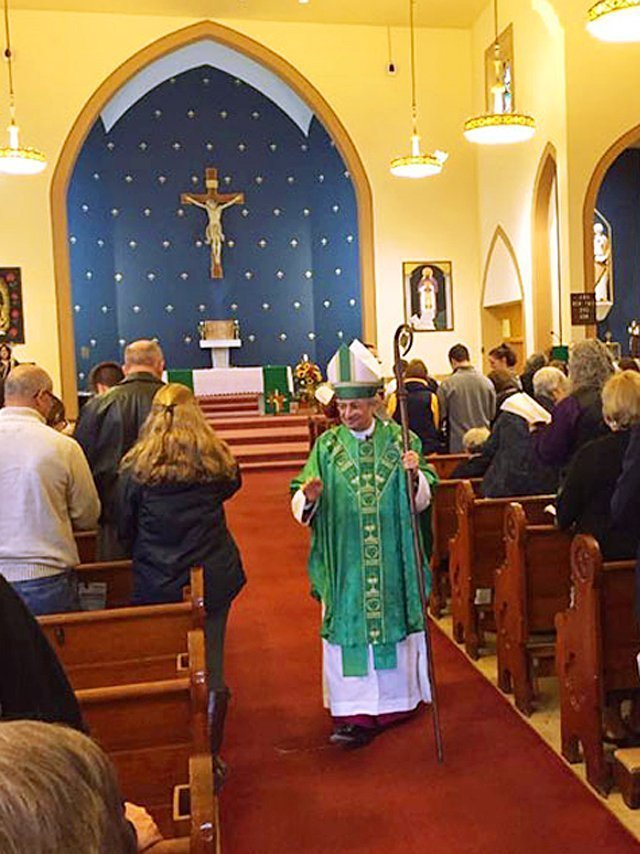 On Oct. 4, 2015, Bishop Salvatore R. Matano celebrated a Mass at Geneva’s St. Francis deSales Church, which is part of Our Lady of Peace Parish. The Mass commemorated the 150th anniversary of the parish’s Rosary Society.

In Geneva there is a group of Catholic women that has been meeting faithfully for more than 150 years. The women in this group pray the rosary together before each meeting, clean the sanctuaries and altar linens of Geneva’s Catholic churches, and are active in parish activities and charitable work.

These women are the members of Our Lady of Peace Parish’s Rosary Society, which celebrated its 150th anniversary in 2015.

"One hundred and fifty years is quite an accomplishment," noted Marie Laquitara, the society’s past president and author of a brief history of the society.

The earliest beginnings of this society actually date back to the mid-1800s, when a group of Catholic women started gathering at St. Francis de Sales Church to take care of the church’s altar linens and clean the sanctuary. These women called themselves the Altar Society and recited the rosary together before their monthly meetings, Laquitara said.

In 1865 the group officially became known as the Rosary Society, according to Laquitara. These women carried out the same activities as their predecessors and also became very active in church activities and charitable work.

"The Rosary Society was formed to dedicate love and service to our creator, Our Lady and our parish. Over the years we just did an awful lot for the church," Laquitara told the Catholic Courier.

In the early 1900s the Rosary Society’s members helped pay for a stained-glass window and organized a lawn social, which eventually evolved into the summer festival that raised quite a bit of money for the parish until the 1980s. After the bombing of Pearl Harbor in 1941 the society’s members folded bandages in the church hall, made thousands of surgical dressings, and baked pies for and served food to servicemen stationed at the nearby Sampson Naval Base on Seneca Lake.

After World War II ended the society organized Christmas parties for the Sisters of St. Joseph who taught at St. Francis de Sales School and DeSales High School, according to Laquitara’s history. In the 1960s the Rosary Society’s members held turkey raffles and bazaars to fund the purchase of new furnishings for St. Francis’ rectory and school hall, donated a new pulpit to the parish, and planned annual living rosaries, May crownings and Communion breakfasts, some of which are still held today. Over the years the society’s members also began helping needy families at Christmas and ministering to parishioners who were homebound, hospitalized or in nursing homes.

Although some of the Rosary Society’s activities have changed over the past 150 years, the women who make up the society still share the same devotion to God, Mary and their parish, she added. The Rosary Society continued to carry out its mission after St. Francis de Sales merged with neighboring St. Stephen Parish in 2007 to form Our Lady of Peace Parish, and its members currently care for and support both churches.

Members of the Rosary Society strive to exemplify a Christian way of life under the direction of their parish priest, and dedicate their time and resources to carrying out their mission of word, worship and service to their parish community, Laquitara said.

"In a day when so many Rosary Societies have disappeared, you rosarians are to be complimented for your faithful, devoted attendance and efforts, which have kept our Rosary Society a living witness to our devotion to Our Lady and dedication to parish service," she told the Rosary Society members who attended a brunch held last fall at Geneva’s Club 86 in honor of the society’s 150th anniversary.

At the invitation of the Rosary Society, Bishop Salvatore R. Matano celebrated a Mass held Oct. 4, 2015, to commemorate the society’s anniversary and was the guest of honor at the brunch held afterward. Laquitara presented an overview of the society’s history and turned over the reins of leadership to Mary Jane Melito, who took over as president in November.

The society is seeking new members in 2016, Melito said. Membership has dwindled from 400 in 1965 to approximately 35 current members, with four or five new members joining in 2015, Laquitara said.

"I love the people and I wish more people would join because it’s a good thing," remarked Phyllis Snyder. "I’ve been a member for a long time and I just love it. It’s fun to be together and … we do some nice things for people."

Rosary Society meetings are held the first Monday of each month in the parish’s chapel, Melito said. The women pray the rosary at 6:30 p.m. and hold their meeting at 7 p.m.

Anyone interested in joining the society may come to a meeting or call Melito at 315-521-7637.