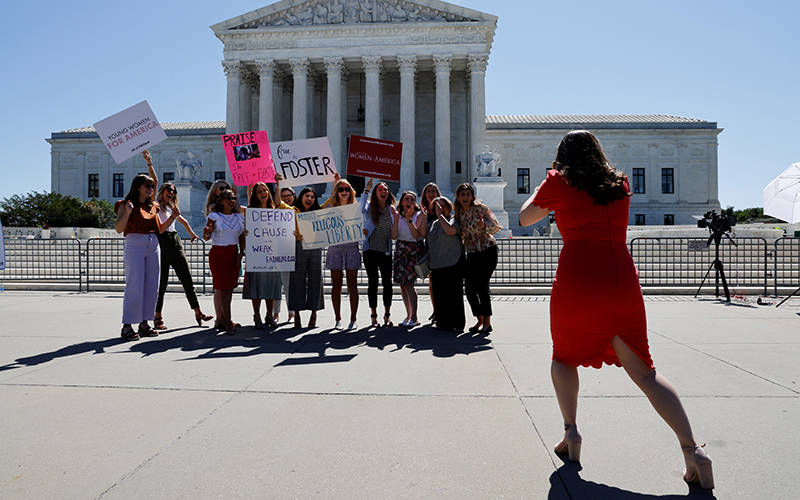 Women pose for a picture near the U.S Supreme Court building in Washington June 17, 2021. In a unanimous decision June 17, the Supreme Court said that a Catholic social service agency should not have been excluded from Philadelphia’s foster care program because it did not accept same-sex couples as foster parents. (CNS photo by Jonathan Ernst/Reuters)

PHILADELPHIA (CNS) — As a consequence of the U.S. Supreme Court’s unanimous ruling June 17 in Fulton v. Philadelphia, faith-based and other agencies across the country may not be forced by a government agency to violate their deeply held beliefs against placing children in households led by same-sex or cohabitating adults.

In a decision seen as a victory for religious freedom in the United States, the court ruled the city of Philadelphia acted improperly and violated the church’s First Amendment rights when it ceased referring foster children to Catholic Social Services of the Archdiocese of Philadelphia three years ago because of the agency’s practice of not placing children in same-sex households.

Philadelphia Archbishop Nelson J. Pérez said the ruling was a victory for at-risk children and he noted the contributions of “foster parents who give of themselves freely.”

He also said the work of Catholic social ministry would continue beyond that of foster care as it has in the archdiocese through “pioneering programs” for more than 200 years.

“The Catholic Church in Philadelphia is steadfast in its commitment to continue serving the temporal and spiritual needs of all — now and for the long term,” Archbishop Pérez said. “We have partnered successfully with city government to serve the people of Philadelphia many times, and we look forward to continuing a fruitful partnership in the future.”

Because of the court’s ruling the archdiocese can continue serving those in need, and it protects “our enshrined right to religious freedom and celebrates the rich diversity of religious beliefs in the United States,” he said.

“Religious ministries,” he concluded, “cannot be forced to abandon their beliefs as the price for ministering to those in need. We can all live and work peacefully, side-by-side, to create a better and brighter future for all of our children.”

CSS traditionally had chosen not to refer at-risk foster children identified by the city of Philadelphia to same-sex households, and instead passed the referrals to another approved agency, which could place children in such homes.

The practice of deferring the city’s placements if the households were deemed contrary to Catholic teaching on marriage had been standard practice between CSS and Philadelphia’s Department of Human Services for decades.

But in 2018, that department, after calling on the public to open more homes to meet an acute need for loving homes for children, ceased all referrals to CSS, effectively shutting it out of foster care.

CSS and three women caregivers, supported by legal counsel the Becket Fund for Religious Liberty, sued the city over that decision. They lost in a U.S. District Court ruling that year, as well as a federal appeals court ruling one year later.

The agency then appealed to the high court, resulting in the decision the morning of June 17.

Soon after the 9-0 ruling was announced, Archbishop Pérez in a conference call with media called the court’s decision “a profound one that rings loudly in Philadelphia and reverberates throughout the country.”

“It brings light and relief for children in need of loving homes and for the heroic foster parents who open their hearts and doors to care for them,” he said.

He added that the ruling is “a crystal clear affirmation of First Amendment rights for the Archdiocese of Philadelphia and all charitable ministries in the United States who are inspired by their faith to serve the most vulnerable among us.”

One of the plaintiffs in the suit, CSS foster mother Toni Simms-Busch, said the Supreme Court justices understood that “foster parents like me share in the common, noble task of providing children with loving homes.”

She said there was a “foster care crisis” in Philadelphia and Catholic Social Services “is a cornerstone of that ministry.

“The Supreme Court’s decision ensures the most vulnerable children in the City of Brotherly Love have every opportunity to find loving homes,” Simms-Busch said.

“I am overjoyed that the Supreme Court recognized the important work of Catholic Social Services and has allowed me to continue fostering children most in need of a loving home,” said foster mom Sharonell Fulton, the named plaintiff.

“My faith is what drives me to care for foster children here in Philadelphia,” she said, “nd I thank God the Supreme Court believes that’s a good thing, worthy of protection.”

The work of CSS to place at-risk children in foster homes ceased three years ago, and will not resume immediately with the city because of a 90-day “cooling off” period following the Supreme Court’s ruling, according to James Amato, secretary for the Philadelphia Archdiocese’s Catholic Human Services.

At the time the city excluded CSS, it was serving on average 127 foster children a day in over 100 homes in Philadelphia. Now three years later, 12 foster children remain in the care of CSS care through a maintenance provision of the contract with the city.

A number of foster parents remain available to accept placements from CSS when referrals resume from the city, according to Amato.

Lori Windham, senior counsel at Becket who argued the case in Fulton, called it “a beautiful day when the highest court in the land protects foster moms and the 200-year-old religious ministry that supports them.”

“Taking care of children, especially children who have been neglected and abused, is a universal value that spans all ideological divides,” she said in a statement.

“Today, I am grateful that the Supreme Court protected heroes of the foster care system like Sharonell and Toni, who give of themselves daily to care for children in need,” she added.

In other reaction, Catholic Charities USA also welcomed the ruling to protect the Philadelphia Catholic agency’s “ability to serve people in need in a manner consistent with the church’s faith and values.”

“In their history, Catholic Charities agencies have enjoyed a cooperative partnership with government to work for the common good,” said a statement issued by the national network of Catholic Charities agencies. “Such cooperation has been predicated on valuing diverse perspectives and mutual respect. Hopefully, we will continue to work together to serve all people with dignity and respect.”

Gambino is director and general manager of CatholicPhilly.com, the news website of the Archdiocese of Philadelphia.