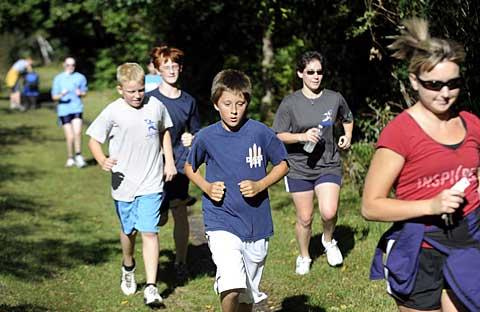 Anybody who’s ever taken a stab at distance running will confirm that aches, pains and fatigue are all part of the package.

However, as Danny Jankowski points out, physical and personal accomplishments also belong on that list — and in his opinion, these positive factors outweigh the sacrifices.

"After a run it actually makes me feel better, like I feel good. I take a deep breath and it feels good that I ran in a race," said Danny, 13.

Thanks to a growing focus on running at St. Mary School in Canandaigua, Danny and many other students now have ample opportunity to experience such feelings. The cross-country team, open to grades 7 and 8, is in its second year of fall competition at the modified level with other schools in Section 5. In addition, a running club began this past spring for grades 5 through 8.

St. Mary has seven cross-country members who train nearly every day of the week, with competitive scholastic meets taking place on Tuesdays. Meanwhile, the running club has resumed this fall with 12 students gathering on Mondays and Wednesdays during cross-country practice time. The club serves to introduce young people to distance running, yet without as stringent a commitment as cross-country.

These successful offerings can be traced back to some initiative taken by Danny’s mother, Deirdre, who said she got the idea for a cross-country program at St. Mary while watching her older son, Matt, run for Midlakes High School in Phelps.

"I would go to the meets and see modified teams from other Catholic schools and think, ‘How come St. Mary’s can’t do this?’" Jankowski recalled, adding that the school’s principal, Ann Marie Deutsch, followed up on that thought by successfully applying for participation in the Wayne Fingerlakes League.

Jankowski serves as a facilitator and coach for St. Mary along with Andrea Van Hof, the school’s music teacher, and Suzanne Pohorence, a second-grade teacher, who are both experienced runners and "generously offered their time, energy and talents to make it happen," Jankowski said.

"I didn’t have much running experience and was due to have a baby at the end of September last year, so I needed a lot of help if it was going to happen last fall," she explained, noting that Van Hof and Pohorence also got the running club off the ground in the spring: "I am very grateful to them. They have very busy schedules so it amazed me that they gave even more for the students to have this opportunity. Miss Pohorence even made lunches for the team on meet days so they could learn about the importance of a good diet."

St. Mary’s runners train at a nearby park and often log up to three miles per practice, though not continuously. Also included in the mix are fun drills and games, such as relays and playing tag, that help the young athletes maintain their interest while increasing their fitness.

"So far it’s really fun," reported Nathan Gellatly, 11, a St. Mary sixth-grader who just joined the running club when school began in September. "And it’s a good way to exercise; it’s useful if you can get around faster."

"I think I’ve gotten a lot better even though I just started," he said, adding that he likes to dream about how he’s going to be "the fastest kid in my class."

Self-improvement is a big motivator for Danny as well.

"I love it when, after I run at meets and find out my time, I can compare it to my other times," he said.

Another positive aspect of this program is the opportunity for new friendships.

"I’ve met a lot of people by running with them," said Danny, a St. Mary eighth-grader, who is in his second year on the cross-country squad.

The running club will resume next spring, and Jankowski said some parents have inquired about the possibility of St. Mary establishing a track-and-field program in the future.

"The kids enjoy it and the parents are very supportive," she said. "And they will gain exposure and experience to give them confidence to participate in future running events and other sports."

Jankowski remarked that she didn’t personally start running until a couple years ago — but now, thanks to involvement in coaching, "doing this has gotten my whole family into it," she said. In fact, Jankowski even runs while pushing a "jog stroller" with her 1-year-old daughter Maeve, the youngest of her five children, in tow.

"I see it as a lifelong sport," Jankowski added. "You go to a 5K race, and people in their 80s are still running in it."