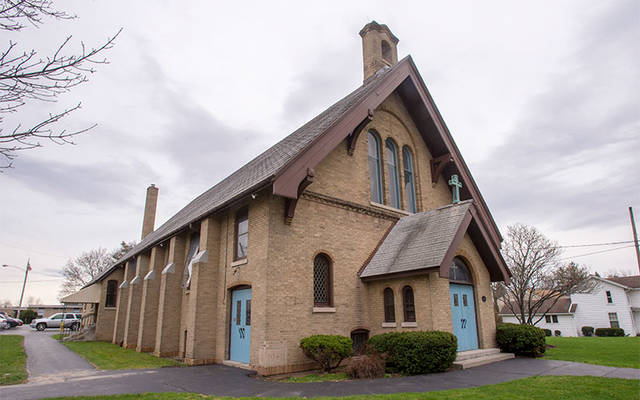 HENRIETTA — With the July 3 sale of the Church of the Good Shepherd campus to the Rush-Henrietta Central School District, St. Marianne Cope Parish completed a major step in an ongoing consolidation process.

St. Marianne Cope netted $1.3 million from the transaction, according to Mercy Sister Sheila Stevenson, pastoral administrator. Under terms of its agreement with the school district, the parish may continue using all of the Good Shepherd facilities free of charge through June 30, 2022, with the option that “we can vacate any building at any time” prior to that date, Sister Stevenson said.

Good Shepherd’s property comprises the original church built in 1911; the former school, including a basement chapel where Sunday Masses have taken place since 1964; a parish office building; and a house adjacent to the office. Sister Stevenson said all of Good Shepherd’s operations will eventually be shifted to Henrietta’s Guardian Angels Church, located three miles to the north.

She explained that proceeds from the sale of Good Shepherd are being earmarked for major upgrades at Guardian Angels, and that the Good Shepherd campus will likely be utilized until those renovations are completed. The parish does not yet have a precise timetable for the upgrades, she added.

St. Marianne Cope Parish comprises Good Shepherd, Guardian Angels and St. Joseph Church in Rush. The three churches were clustered in 2010 and became a single parish in 2012. Sister Stevenson said that the parish’s long-range plan is for Guardian Angels to become the sole worship site, although St. Joseph is not for sale at this time.

She said the consolidation plan was agreed upon by staff and parishioners as a result of discussions begun more than two years ago, when Barbara Swiecki — who died in June 2018 — was still the pastoral administrator. St. Marianne Cope Parish has approximately 2,100 families, which is 300 fewer families than when the churches were first combined nine years ago.

“Mass attendance declines, and therefore financials decline. It’s unreasonable to think that we could maintain three properties with nine buildings for very much longer,” Sister Stevenson said, adding that low availability of priests also factored into the decision to consolidate. The parish currently has one priest, Father Malachy “Eloo” Nwosu, for its three churches.