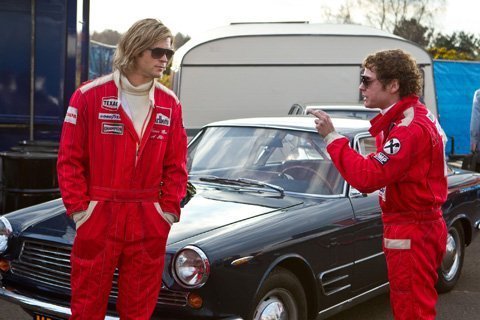 Yet, as scripted by Peter Morgan, Howard’s film presents audiences with a range of morally unsettling elements as well as with an emotionally wrenching sequence involving gory wounds. Accordingly, it makes appropriate viewing neither for the squeamish nor for those lacking in maturity and discernment.

Hunt’s dissolute ways draw his relentlessly focused chief competitor’s jealousy and resentment; while Lauda’s humorless Teutonic temperament becomes the target of Hunt’s contempt. Recklessly, the two contenders spur each other on to ever more dangerous tactics.

Off the track, in a bid to mute his own excesses, Hunt impulsively proposes to high-profile model Suzy Miller (Olivia Wilde). Though their union reins in his alley-cat impulses, it does nothing to curb his drinking or his self-centeredness, and the stage is set for future conflicts.

Lauda, meanwhile, falls for chance acquaintance Marlene (Alexandra Maria Lara), a fellow German-speaker who knows nothing, initially, of his fame as a racer. Though their romance is a predictably low-key affair, events prove their connection durable, Lauda’s prickly personality notwithstanding.

The movie’s climax highlights the folly of Hunt and Lauda’s safety-disdaining feud. Still, viewers committed to the sanctity of life will note that the prospect of some fatal disaster is precisely what imbues both their sport — and this picture about it — with the dynamics of high-stakes drama.

As for the sexual escapades that make up a significant aspect of Hunt’s private life, they’re presented not only unblinkingly, but in a way that tends to glamorize them as well. Such bedroom scenes, however, take up only a tiny fraction of the running time.

Though it’s equally fleeting, and set within the context of an extremely stressful situation, an exchange of dialogue showing one central character’s obscenely expressed aversion to the ministrations of a Catholic priest can hardly fail to give offense to those who cherish the faith.

In the larger scheme of things, though, Hunt and Lauda’s respective fates, detailed before the final credits roll, can be taken as a cautionary tale — one that would seem to vindicate moderation over decadence.