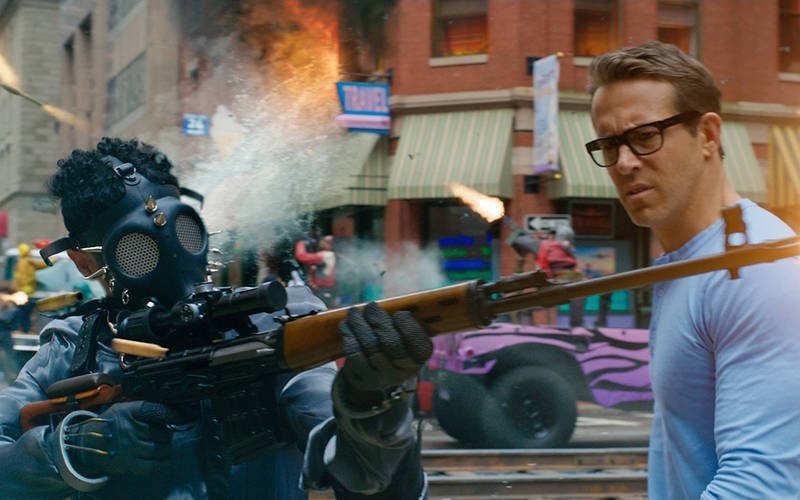 NEW YORK (CNS) — Nonconformity and self-realization are the main items on the agenda of the droll comic adventure “Free Guy” (20th Century).

While the foundational themes of Matt Lieberman and Zak Penn’s script are mostly in sync with Judeo-Christian values, there’s a vaguely anti-religious tone to a few of their jokes. Their screenplay, moreover, takes a somewhat hypocritical stance toward the taste for violence in contemporary culture.

The punning title refers both to the first name and the generic initial personality of the film’s protagonist, played with aplomb by Ryan Reynolds. A contented bank teller in a weirdly dystopian city, Guy goes through his highly repetitive daily routine blithely ignoring the mayhem constantly unfolding around him. He’s joined in his indifference by his best friend and co-worker, security guard Buddy (Lil Rel Howery).

All that changes as Guy gradually makes the startling discovery that he is, in fact, a background figure in “Free City,” a combat-laden, hugely popular video game. As a so-called nonplayable character, he’s just meant to serve as window dressing for the tumultuous action, including the daily armed robberies at his workplace. In fact, he’s theoretically incapable of breaking free of his preprogrammed behavior.

Yet, spurred on by his love for hard-bitten street fighter Molotovgirl, the avatar of gifted real-life game designer Millie (Jodie Comer), Guy begins to assert his individuality. He also brings a new, more positive ethos to “Free City,” thereby winning widespread acclaim among its players.

Director Shawn Levy’s sly celebration of Reynolds’ Everyman elevates creativity over profit-seeking through its depiction of Antwan (Taika Waititi), the sleazy CEO of Soonami Studios, the company that markets “Free City.” Antwan, it turns out, stole and perverted a game with a far more peaceful premise created by Millie and her longtime partner — and would-be boyfriend — Keys (Joe Keery).

Lieberman and Penn’s obvious, if implicit, critique of the mindless havoc by which Guy’s environment is beset, and which makes “Free City” such a lucrative property, will be welcomed by believers. But their stance in this regard is considerably undermined by the fact that the persona Guy eventually develops comes equipped with impressive fighting skills.

While teens with a fondness for gaming may be anxious to see “Free Guy,” it’s not appropriate fare for them. There’s little gore, but the dust-ups do briefly turn nasty, and the dialogue is often freighted with expletives. Add to that the humor surrounding Antwan’s role as the “god” of Guy’s world — comedy that can be read as satirizing faith — and the picture clearly registers as material for grown-ups.

The film contains much stylized but sometimes harsh violence, irreverent and sexual humor, a few uses of profanity, several milder oaths, at least one rough term and frequent crude and crass language. The Catholic News Service classification is A-III — adults. The Motion Picture Association rating is PG-13 — parents strongly cautioned. Some material may be inappropriate for children under 13.