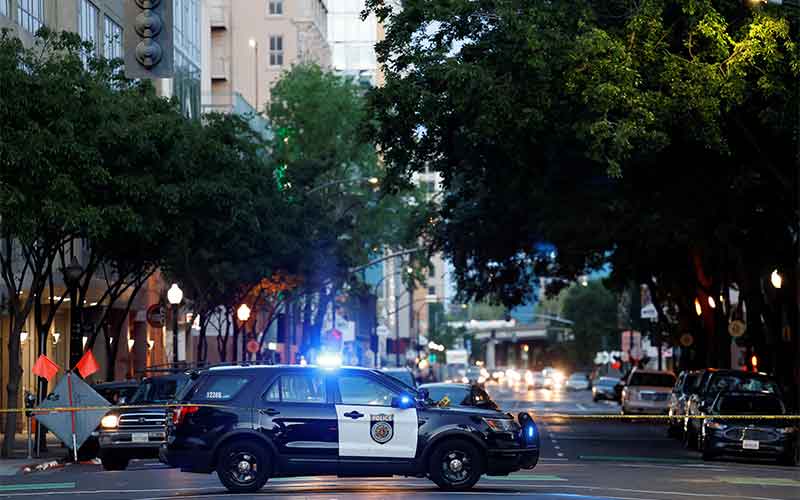 A police vehicle in Sacramento, Calif., is seen after an early-morning shooting in a stretch of the downtown near the Golden 1 Center arena April 3, 2022. (CNS photo by Fred Greaves/Reuters)

Priest: Oxford, Mich., is rebuilding ‘crumbled edifice of our hearts’

Authorities announced the following day the arrest of Dandre Martin, 26, calling him a “related suspect” and charged him with assault with a deadly weapon, news reports said.

The event not only left death and injury, but “a community ravaged by incomprehensible rage,” said Bishop Soto in a statement posted on the Diocese of Sacramento website.

“The suffering inflicted will continue to reverberate among all of us. As senseless as these bloody acts are, let us soberly resist becoming numb to the pain we now share in common,” he said.

The shootings took place at 2 a.m. in California’s capital, news reports said, as people were leaving bars and entertainment facilities in the downtown area after weekend reveling and may have been related to a fight.

Bishop Soto, mentioning the proximity of the deadly event to Holy Week and Easter, said that “charitable works are the tools that Jesus gives to us so that we can cultivate our in communities a springtime of mercy and harmony.”

“Remember to invest the necessary moral capital that comes from being good neighbors toward one another,” he said in the letter addressed to his diocese.  “As neighbors we ache for the tragedy that has exploded on our streets. As neighbors we must share in the common task of healing and helping.

“Only then can we restore hope and peace our communities. This must be our unrelenting response whenever violence wreaks its havoc among us.”