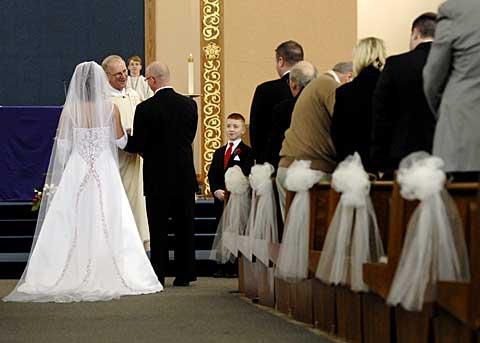 For many engaged couples, the months leading up to the wedding can be filled with discussions about cakes and flowers, guest lists, and the impending acquisition of in-laws, shared bank accounts and sometimes even new homes. Discussions about their faith frequently take a backseat to these seemingly more urgent topics, noted Father Thomas Mull.

"Oftentimes, the faith, because it’s so personal to many people, is one of the last things being talked about," said Father Mull, pastor at St. Mary Parish in Canandaigua and St. Bridget/St. Joseph Parish in East Bloomfield

That is, until the couples go through sacramental marriage preparation, he added.

"(Then) our conversation usually takes off in a direction that lots of couples haven’t considered," he said.

These conversations, as well as the ones he has with parents preparing for a child’s baptism, sometimes prompt young adults to take a more active role in a faith they’ve neglected, Father Mull noted. Most of these young adults haven’t intentionally separated themselves from the church, he observed. Rather, they didn’t prioritize their faith, and over time drifted further and further away from active participation. They may have had good intentions, but failed to back those up with actions.

"I think it’s just like all of us, we say we’re going to get to that, and it’s further down the road than we thought. We think, ‘I’m going to write that thank-you note,’ and before you know it a month has gone by," Father Mull said.

Lori Cunliffe, youth minister and parish-life coordinator at St. Patrick Parish in Victor, often works with couples preparing for marriage and baptism and said she also sees many young adults who’ve unintentionally drifted away from their faith.

"I would probably say that 75 percent of them have not gone (to Mass regularly) since their parents made them go. They’ve gone through their high-school years and they go off to college and then stop going," Cunliffe said.

When he meets with couples preparing for marriage, Father Mull asks them to talk to each other about their faith, and about how each wants to practice and live out that faith.

"If one person tends to be more active in their faith than the other, there tends to be a spark that tends to involve both of them in that parish," Father Mull said. "I would say in some cases young couples become more active."

It can be difficult to determine whether couples become more active after marriage, however, because couples don’t always register and worship at the parishes where they were married, he said. Some couples marry at their childhood churches then put down roots at another church, while others leave their home parishes when work and school obligations force them to relocate.

Sometimes couples choose to marry at a church they have no history with based on geographic or environmental factors, Cunliffe added. Several couples have chosen to marry at St. Patrick, for example, because they feel it’s conveniently located near the New York State Thruway and a number of wineries and other prime sites for wedding receptions, she said.

"Many of the young couples that we see in marriage preparation are here from outside of the parish. Probably one-third belong to the parish," Cunliffe said.

It’s easier to measure the number of couples who either become or remain active in a parish after baptismal preparation, Father Mull said. These parents aren’t necessarily active in their own faith, yet feel a deep sense of responsibility to have their children baptized in their own Catholic faith. During baptismal preparation, Father Mull reminds parents that there’s more to baptism than just the celebration, and that parents are called to be faithful witnesses and good role models for their children.

"The baptism is going to be a beautiful day, but it’s the beginning of the ‘yes’ that they’re pledging," Cunliffe noted.

Many parents preparing for the baptism of a child will begin to consider their own practice of the Catholic faith or lack thereof, Father Mull said. Cunliffe said she tries to encourage that line of thinking by beginning baptismal-preparation classes with an opening prayer that invites discussion among the participating couples. These couples are asked to talk about why they want their child to grow up Catholic, a moment when they realized God’s presence in their lives, or a person in their lives who has been a good role model and Catholic witness.

"It starts a conversation about their own faith, and a lot of times it draws them into conversation with each other," Cunliffe said.