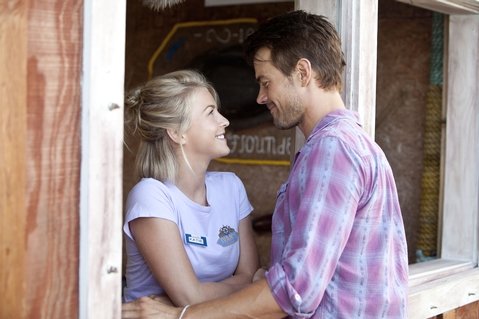 NEW YORK (CNS) — Somehow it just wouldn’t be Valentine’s Day without a gooey adaptation of a tale by Catholic novelist Nicholas Sparks, the current master of the romantic drama.

This year, it’s "Safe Haven" (Relativity), Lasse Hallstrom’s screen version of Sparks’ 2010 novel of the same title. Hallstrom is a veteran of the genre, having directed the Sparks-based "Dear John" in 2010.

This latest cinematic confection, however, has a morally dubious core that will leave ethically conscientious audience members with an unpleasant aftertaste.

All of the requisite Sparks elements are present here: an attractive couple, a tear-jerking love story, a pair of adorable kids, and a beautiful setting along the North Carolina coast. There’s also a hint of mystery and a menacing backstory reminiscent of the 1991 Julia Roberts weepie, "Sleeping with the Enemy."

Katie (Julianne Hough) steps off the bus in the seaside town of Southport and decides to stay. She’s been running from something sinister but is now determined to make a fresh start in a decidedly Rockwellian place with friendly people and family values to spare. So she gets a job, buys a cabin in the woods, and paints it yellow, a "happy color."

She heeds the wisdom of her new neighbor, Jo (Cobie Smulders), who proclaims, "Life is full of second chances."

Once Katie lets down her defenses and learns to trust others, her life is full of Alex (Josh Duhamel), a lonely widower who runs Southport’s general store. Katie warms to him and his two moppets and, before long, the music swells, the sun sets in glorious reds and oranges, oysters are consumed, slow dances are lingered over — and love blossoms.

Not so fast, as Katie’s past begins to catch up with her, threatening the safe haven she has found. The gun-toting Kevin (David Lyons) arrives on the scene, having doggedly pursued Katie for some time.

Delving into the details would constitute a spoiler. Suffice it to say that Kevin’s appearance is not only bad news for Katie and Alex, but for viewers committed to Judeo-Christian values as well.

The film contains brief violence, an ambiguous attitude toward marital fidelity, nongraphic adulterous sexual activity with fleeting partial nudity and a few instances each of profane and rough language. The Catholic News Service classification is L — limited adult audience, films whose problematic content many adults would find troubling. The Motion Picture Association of America rating is PG-13 — parents strongly cautioned. Some material may be inappropriate for children under 13.