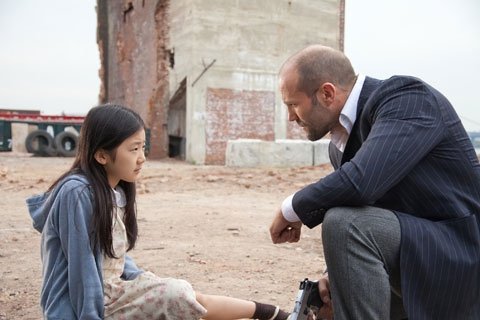 NEW YORK (CNS) — With its huge onscreen casualty count, the wildly violent action flick "Safe" (Lionsgate) turns out to be anything but.

This is essentially a mayhem-ridden vehicle for take-no-prisoners he-man Jason Statham. Statham plays downtrodden cage fighter Luke Wright, whose life has been blighted by the Russian mafia after he cost them big-time by throwing a fight. At the direction of crime overlord Emile Docheski (Sandor Tecsy), they’ve not only killed Luke’s wife, but threatened to rub out anyone he might bond with in the future.

So, isolated and broken, Luke drifts through the underworld of New York City’s homeless until the day he accidentally discovers that the Russkies have a new, seemingly unlikely, target: a 12-year-old Chinese math prodigy named Mei (Catherine Chan).

As viewers have already seen, Mei’s ability to memorize long sequences of numbers led to her exploitation by another group of no-goodniks, the Triads. Under the continent-straddling leadership of Han Jiao (James Hong), they dispatched Mei to Gotham to keep mental, written-record-free track of their holdings there.

Mei’s latest feat of memory, involving the elaborately disguised combination to the titular lockbox, will eventually make her the target in a three-way struggle among her current masters, the ruble-relishers, and corrupt elements of the New York City Police Department under the command of ruthless Captain Wolf (Robert John Burke).

Since his first sighting of the innocent Mei restrained Luke from committing suicide, he regards her as his savior, and he resolves, in turn, to protect her at all costs (thus the other meanings of the title). As the array of villains pursuing Mei soon discover, the cost will indeed be high.

The potentially touching story of Mei’s random but redeeming presence in Luke’s life gets trampled underfoot as writer-director Boaz Yakin rushes from one bone-cracking, windpipe-crushing brawl to the next.

"You broke his trachea!" runs one absurd, but all-too-accurate line of dialogue. While a good narrative is supposed to show, not tell, in this case, we could have done without the demonstration.