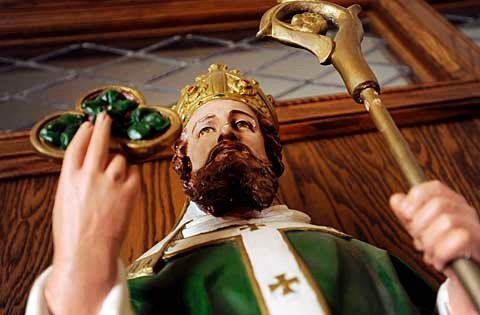 A colorful statue of St. Patrick greets parishioners as they enter St. Patrick Church in Victor.

In mid-March, Catholics will experience a slight roller-coaster ride in regard to feasting and fasting.

Though only two days apart, St. Patrick’s Day on March 17 and St. Joseph’s Day on March 19 are among the most extensively celebrated of all saintly feasts. These beloved saints "enjoy widespread devotion even to this day, and with very good reason. Both were men of deep faith," remarked Father Walter Wainwright, a retired diocesan priest who has written numerous bulletin columns about the lives of saints.

St. Patrick is credited as the person most responsible for spreading Christianity in Ireland, where his feast day is a national holiday. Meanwhile, St. Joseph’s Day celebrations honoring the head of the Holy Family take place primarily in the Italian culture. Father Wainwright noted that both saints’ feasts get high recognition in North America due to a large influx of Irish and Italian immigrants and their descendants.

Both observances always take place during Lent, since Ash Wednesday never falls later than March 10 and Easter never comes before March 22. That means food and drink for St. Patrick’s Day and the extensive food displays of St. Joseph’s Tables are featured during a 40-day period traditionally characterized by fasting and abstinence.

Yet due to the two feast days’ popularity, Father Wainwright said they generally are considered times of celebration "rather than of Lenten penance." In fact, Catholic bishops often grant dispensations in dioceses when St. Patrick’s Day falls on a Lenten Friday (this last happened in 2006 and will next occur in 2017) so that Catholics can consume corned beef and other meat.

To acknowledge the religious significance of these feasts, food from the traditional St. Joseph’s Tables is blessed, usually by a priest. St. Patrick’s Day festivities often begin with special Masses before giving way to widespread partying — an outgrowth of the secularization that has overtaken much of that holiday.

"The spiritual end of it is very important to us," said David Watt, president of the Hornell-based Sons Of Ireland, Division 1 (Steuben County) in the Ancient Order of Hibernians. Yet "most people don’t even acknowledge why they’re out reveling."

Hero to the Irish

Perhaps it’s fitting that so many non-Irish celebrate the feast of St. Patrick, since the man himself was not of Irish descent either. Born in an unspecified part of Great Britain around the end of the fourth century, St. Patrick was kidnapped by pagan Irish raiders as a teen and brought to Ireland, where he spent six years in slavery working as a shepherd. He grew mightily in his spirituality during that period.

"It was during these long and lonely years that he came to a new and deeper understanding and love for his faith," Father Wainwright noted.

After escaping captivity and returning to Britain, Patrick became a priest and then a bishop. In approximately 432, he fulfilled a strong desire to return to Ireland and convert people to Christianity.

"The truth of the matter is, he came from a well-to-do family and he gave a lot up to go back to Ireland," Watt said.

For the rest of his life, St. Patrick’s evangelizing efforts took him all over the Emerald Isle. In addition to the physical trials of his journeys, he encountered strong opposition and threats from pagan Druids, and was imprisoned numerous times. Yet he always managed to go free again, and he and his followers continued to build churches and form dioceses.

"There was no doubt about Patrick’s stunning success as a missionary. He himself writes of the ‘so many thousands’ whom he personally baptized and confirmed. He marveled at the generosity of their response," wrote Father Robert F. McNamara, the late diocesan historian, whose "Saints Alive" column can still be accessed here.

"He worked tirelessly, and often amid very trying conditions giving a strong example of living one’s faith," Father Wainwright added. The priest also pointed out that the autobiographical Confession of St. Patrick is still widely read to this day, and that several prayers originated by St. Patrick have endured.

St. Patrick is believed to have died on March 17 in the year 461 or 493, according to various historical accounts. He has subsequently been dubbed the patron of Nigeria, engineers and excluded people, as well as the patron saint against snake bites and fear of snakes. Yet it is his iconic role as patron saint of Ireland that accounts for his immense popularity. This attention has occurred despite the saint’s decidedly humble nature, according to Father Wainwright.

"He would have shunned any notion of fame, but from the time of his death he has been held in such high esteem both by the people in Ireland and throughout the world," Father Wainwright said.

St. Patrick will soon receive due homage from Hornell’s Hibernians, a 100-member group that formed in 2006 with the support of the Ancient Order of Hibernians’ Msgr. John J. Lee Division in Elmira. On the morning of March 12, the Saturday before St. Patrick’s Day, the Hornell AOH contingent will process from the Knights of Columbus hall to St. Ann Church for its annual Corporate Communion Mass. The Hibernians will then march to Paddy’s Restaurant for breakfast before taking part as a group in the city’s St. Patrick’s Day community parade.

Watt said the Hibernians’ focus departs from the more free-wheeling aspects of St. Patrick’s Day, such as general celebrations of the Irish culture without religious devotion — not to mention folks simply looking for an excuse to party it up.

"It’s not about green beer and ‘Kiss Me I’m Irish.’ We try to downplay that somewhat," Watt said.

Historical details are scant about Mary’s husband, Joseph. His actions are noted only in the Gospels of Matthew and Luke, with details limited to the period of Jesus’ birth and when Jesus as a boy becomes lost in the temple.

"Of all the times Joseph is mentioned in the Gospels he is silent; there are no recorded words spoken by him in the Gospel," Father Wainwright noted.

The priest added that Joseph is most popularly known as protector of the Holy Family. Indeed, Joseph risked considerable opposition from King Herod’s forces to ensure Jesus and Mary’s safety.

"He is a beloved figure, silent but strong, just but loving and gentle," Father Wainwright remarked.

Father McNamara wrote that in the early church, devotion to St. Joseph was limited due to ongoing debate about his importance because he wasn’t the blood father of Jesus. On the other hand, Father McNamara pointed out that Joseph’s parenting skills must surely have been exemplary, based on Jesus’ extraordinary life as a adult.

"What an important role he played in the formative years of Christ!" Father McNamara remarked. "Joseph not only protected his foster son, but gave him human training both in the profession of carpentry and in the arts of family life."

According to Father McNamara, widespread devotion to St. Joseph intensified in the 15th and 16th centuries. In 1870 Pope Pius IX proclaimed Joseph patron of the universal church, and in 1955 Pope Pius XII named a second feast day in his honor — that of Joseph the Worker, which is celebrated on May 1.

St. Joseph is the patron of many people, causes and professions. Among them are families, fathers, married people, carpenters, laborers, house hunters, immigrants, the dying, expectant mothers, unborn children and social justice. He also is the patron of several countries, cities and dioceses, as well as of the Sisters of St. Joseph religious order.

Public reverence is reflected in the many St. Joseph’s Tables that are presented around the time of his feast day in parishes, Italian-American organizations and private homes. This tradition developed after a significant drought and famine beset Sicily during the Middle Ages. Based on his saintly role as the protector of families, Sicilian families prayed for rain to St. Joseph. After the rains finally arrived, they showed their thanks by preparing a major feast in his honor. From there, the feast became established as a yearly custom.

St. Joseph’s Tables emphasize the uniting of family, friends and neighbors. A priest typically begins the event by celebrating Mass and/or blessing the altar that is erected for the table. Participants then dine on a variety of Italian foods including fava beans — the food that saved the Sicilians from starvation — as well as pastries, cookies, breads and pastas. The foods offered traditionally are meatless because the tables are presented during Lent. Upon conclusion of a table, leftover food is distributed among participants to be brought home or given to the poor.

Ada Ferrari and Maria Ciardi, organizers of the annual St. Joseph’s Table at the Italian American Community Center in Gates, said the IACC has put on a St. Joseph’s Table since 1998 when the center first opened. Ciardi said the tables attract around 300 people each year and raise funds to support local charities. This year the center will present its St. Joseph Table on Sunday, March 13, at 3 p.m. and the event will include Mass. All are welcome and are asked to RSVP by calling the IACC at 585-594-8882.

Unlike the spread of St. Patrick’s Day from Irish into popular culture, St. Joseph’s Tables remain a strongly Italian tradition. However, Ferrari said people of all ethnic backgrounds are always welcome at the IACC tables. "We do it to bring people to Christ. They come, they want to learn, they want to know," she remarked.

Tags: Feast Days & Saints
Copyright © 2023 Rochester Catholic Press Association, Inc. All rights reserved. Linking is encouraged, but republishing or redistributing, including by framing or similar means, without the publisher's prior written permission is prohibited.