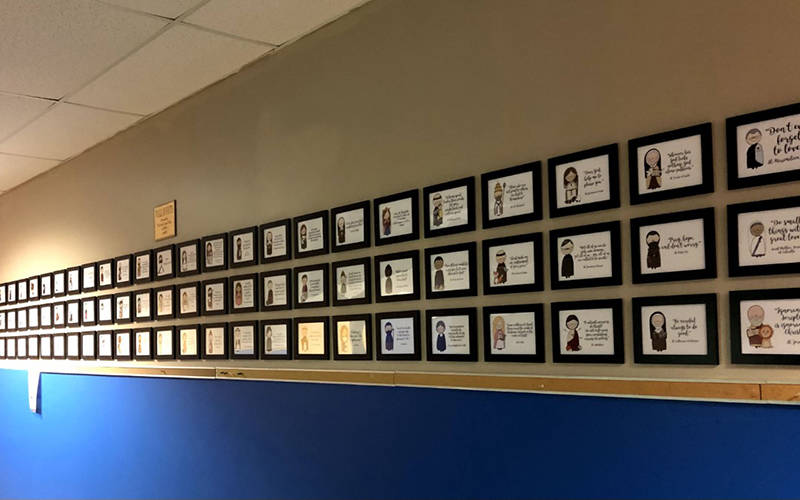 Although the 2021 graduates of St. Joseph School have moved on, their legacy lingers in the Penfield school. It is particularly evident in one hallway, which features a Wall of Faith the graduating sixth-graders created as a gift to the school.

Seventy-five framed images of saints and other people of faith adorn the wall. Each frame also contains a quote from the person pictured or a prayer to that person. Each of the individuals depicted was selected by the sixth-graders who graduated from St. Joseph in June, according to Jennifer Gearinger, whose son was among the graduates.

“To have such a large display of faith all together is impressive. To know that these particular saints represent lessons that sixth-graders recognize as being important to their growth as Christians is heart-warming,” she noted.

Gearinger coordinated the Wall of Faith project through her involvement with the school’s Faith Committee. The committee formed several years ago to the enrich faith-based lessons and classroom activities teachers were presenting, she said, adding that one of its regular activities is to teach students about the lives of Catholic saints and help them realize what a life centered on God looks like.

“Besides teaching biographical information about each saint, we wanted the students to see that saints can be girls or boys, young or old, from rich or poor families and from all different countries. Nut the one thing they all have in common is faith. Whether that faith began at a young age or later in life, the saints displayed an unwavering, unfailing faith to believe, love, trust and hope in God,” Gearinger said.

While browsing an online Catholic store last spring, she stumbled upon a collection of downloadable cards featuring cartoon images of various saints and other people of faith, with quotes from or prayers to those individuals prominently featured on the cards. She asked the sixth-grade students and their families to participate in a “Sponsor a Saint” campaign.

“Sponsoring a saint would help cover the cost of purchasing the file, having the card printed and framing it,” Gearinger explained.

She said the students students were excited and proud to sponsor saints, and took the task of choosing their sponsored saints very seriously. Some chose saints based on their favorite names, while others based selections on stories they’d heard about the saints or because particular saints were the patrons of things that were meaningful to them, she said.

Students were not limited to just one selection, and by the time the campaign was over the 13 sixth-graders had selected 75 individuals. Most of them are saints; three are archangels; and two are in the process of becoming saints, with one having been named venerable and another blessed.

“All are men and women of faith and examples to follow,” Gearinger said, noting that space is available for the Wall of Faith to expand in future years.

Students helped put the cards into frames, and Gearinger and her son hung them on the new Wall of Faith after school one day. The finished project is both a beautiful gift to the school community as well as a wonderful tribute to the sixth-grade class of 2021, said Gearinger, who has gotten to know the class of 2021 class well over the years and said its members flourish when given a chance to help others.

“This Wall of Faith truly represents this sixth-grade class of 2021. … They take their role to lead by example very seriously, so choosing a gift that allows them to lead and teach future generations seemed very fitting,” she said. “Through their years at St. Joseph School, students have learned about and have been inspired by the lives of saints. Leaving a gift to the school that allows the sixth-graders to share a piece of what has been meaningful on their own faith journeys is very gratifying.”