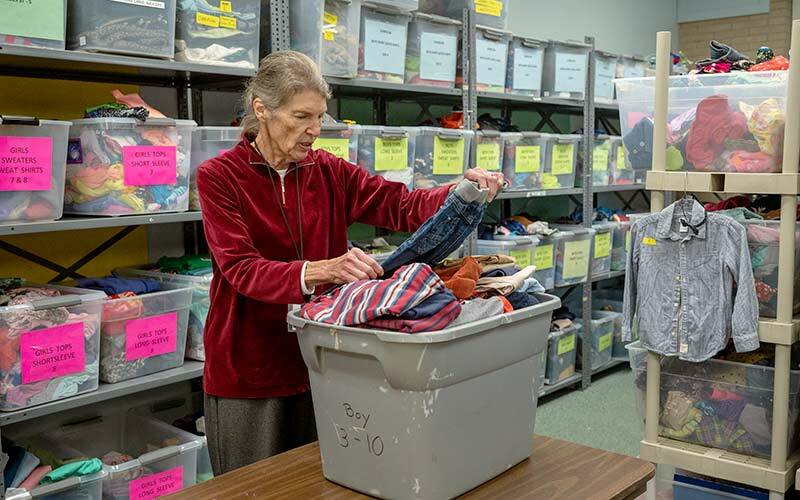 Hundreds of Ukrainians have settled in the Rochester region in the aftermath of Russia’s invasion of their homeland last February. As Christmas draws near, many of them are experiencing conflicting emotions, according to Michele Quinn, associate director of Saint’s Place.

“They’re grateful to be here and out of a war-torn country, (but) these are Christians, and they’re going to be celebrating Christmas but without their families. A lot of them had to leave their husbands behind. It’s going to be a tough Christmas,” she said.

Saint’s Place’s mission is “Welcoming the stranger,” and the organization has welcomed more than 350 Ukrainians to the Rochester region just since July 1, Quinn said. A ministry of St. Louis Parish in Pittsford and St. John of Rochester Parish in Fairport, Saint’s Place provides clothing, furniture, household goods, school supplies, tutoring and scholarships to refugees.

One of the first stops for a newly arrived refugee is Saint’s Place’s clothing closet, which is housed in several rooms of the former St. John of Rochester School. The refugees are completely outfitted with all the clothing they need to live in Rochester — including coats, hats, gloves, scarves and boots — but they get to choose their own items from the clothing closet’s collection of donated items, said Isabel Miller, executive director of Saint’s Place.

The clothing closet has been outfitting approximately 150 people each month this year, Quinn added.

Once a refugee family moves into an apartment, Saint’s Place provides the family with a new bed for each person as well as pillows, sheets, blankets and towels. The ministry also provides pots, pans, dishes, silverware and other household goods. The children in the family are enrolled in school right away — usually at the Rochester City School District’s Rochester International Academy — and each child receives a backpack filled with school supplies as well as access to twice-weekly tutoring.

In 2018, the ministry launched the Saint’s Place Educational Initiative, through which it provides laptop computers to families. If refugees express an interest in going to college, this initiative provides partial payment of the tuition at Monroe Community College, as well as the costs associated with books and fees.

Recently, Saint’s Place also has begun providing basic washers and dryers to some of the larger families they serve. These large families — some with as many as 10 members — generate a lot of laundry, and laundromats can be expensive, Miller explained.

“What they were doing is washing the laundry by hand in their bathtub and then putting it on racks or chairs all over the place. We’re taking a lot of that labor and time away so they can focus on other things,” she said.

Ukrainians arriving in Rochester face a unique set of challenges

The Ukrainians arriving in the Rochester region have many other things to focus on, Miller said. The people coming from Ukraine are doing so through the U.S. Department of State’s United With Ukraine program, so they don’t technically have refugee status, Quinn explained. As such, they need to be sponsored by someone who will take financial and legal responsibility for the family during the first two years they are here. And they can only begin the process of applying for Social Security Numbers — which are necessary in order to find employment — once they’re in the United States, she said.

“There’s a lot of hoops they have to jump through, whereas regular refugees would come in directly to Catholic Family Center, who had everything set up for them,” she added.

The Ukrainians also had less time to prepare for their abrupt resettlement, she said.

“Most of our refugees have been in refugee camps for years. They waited for years to come here, but the Ukrainians, their lives were turned upside-down in a matter of weeks. They come here, and they’re still in trauma,” Quinn said.

Padam Ghimirey knows about refugee camps. A native of Bhutan, he spent eight years in Nepal in a refugee camp that did not have electricity or running water. He arrived in Rochester on Jan. 28, 2009, and was taken to Saint’s Place’s clothing closet the same day. He still has a set of the clothes he chose that day, and he still gets emotional when he looks at them.

“I may keep it until the last day of my life. It means a lot,” Ghimirey said.

Not only did Ghimirey, his wife and their three daughters receive clothing, bedding and household items, but Ghimirey later received a car someone had donated to Saint’s Place, and a volunteer taught him to drive. Ghimirey eventually became a case worker with Catholic Family Center — now known as Catholic Charities Family and Community Services — working with refugees who are resettling in Rochester.

Ghimirey laughs when he’s asked what Saint’s Place did for him.

“What did they not do for me? They did everything,” he said.

Tags: Catholic Charities, Faith in Action, Monroe County East, Refugees, War in Ukraine
Copyright © 2022 Catholic Courier, Inc. All rights reserved. Linking is encouraged, but republishing or redistributing, including by framing or similar means, without the publisher's prior written permission is prohibited.