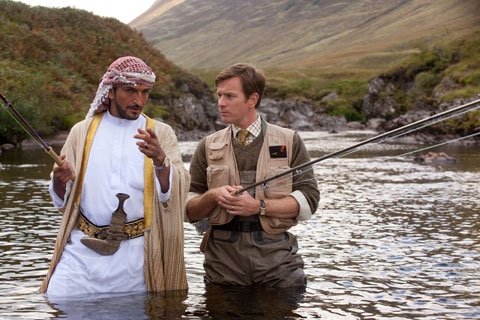 NEW YORK (CNS) — Talk about a fish out of water story! A sheik wants to bring his favorite Scottish pastime to the Arabian desert in "Salmon Fishing in the Yemen" (CBS).

This charming blend of comedy and drama — based on the novel by Paul Torday — insists nothing is impossible, not even re-creating a bonnie loch in the middle of the Middle East.

Directed by Lasse Hallstrom ("Dear John," "The Shipping News") and written for the screen by Simon Beaufoy ("Slumdog Millionaire"), "Salmon Fishing in the Yemen" covers a lot of ground — or should that be water? — ranging from romance and diplomacy to world peace and the ins and outs of fly fishing, all with verve and a sense of fun.

Dr. Alfred "Fred" Jones (Ewan McGregor) is Britain’s foremost fisheries expert. Although he suffers from Asperger’s syndrome, an autism-like disorder which makes social interaction difficult, he perseveres in a dull government job and a loveless marriage.

Excitement lands on his doorstep in the person of Harriet Chetwode-Talbot (Emily Blunt), a glamorous consultant with an important billionaire client: Sheik Muhammed of Yemen (Amr Waked). The sheik is passionate about salmon fishing, and dreams of importing it to his native country.

Never mind the challenge of cold-water salmon surviving in the not-so-fish-friendly desert. The sheik is a visionary, regarding the project as a beacon of hope and a peace-building bridge between East and West.

Everyone loves a good news story, especially the British government. With casualties mounting in Afghanistan, the prime minister commands his manic press secretary, Patricia Maxwell (Kristin Scott Thomas), to change the headlines. She latches onto the salmon story and pitches it as a symbol of Anglo-Yemeni cooperation.

"Salmon Fishing in the Yemen" barrels along as one powerful man’s folly moves closer to reality, transforming not only nature but the engineers involved.

Fishing becomes a metaphor for faith, especially for nonbelievers like Fred. Patience, tolerance and humility are all virtues necessary to fishing, the sheik reminds him. Sometimes, after hours of waiting, "in the end you are rewarded for your faith and constancy — with a fish."

At the construction site in Yemen, Harriet and Fred are impressed by the devout nature of the Muslim workers as they respond to the call to prayer.

"I don’t know anyone in England who goes to church anymore," Harriet says. "On Sunday we go to Target," Fred responds.

"Salmon Fishing in the Yemen" may be just the ticket to soften the hearts — and open the minds — of even hardened skeptics.