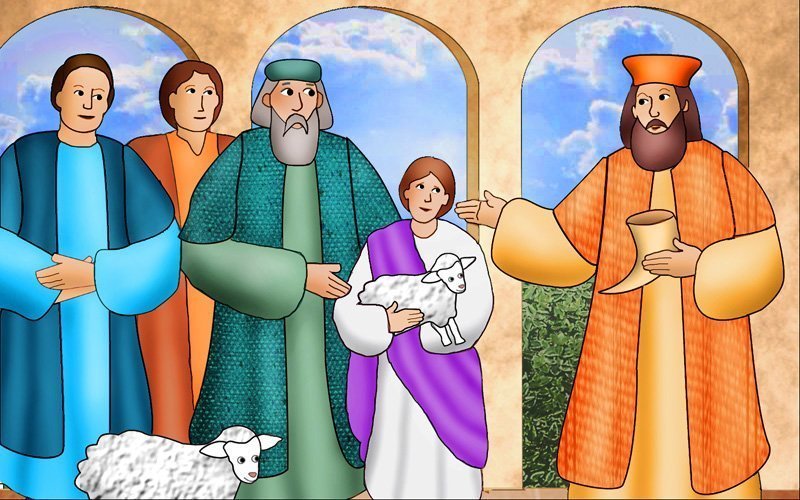 One day, the Israelites came to the prophet Samuel and asked for a king to rule over them.

Samuel prayed to God, and God appointed a man named Saul to be king.

Unfortunately, as the years went on, Saul listened to God less and less. God wound up being very unhappy with Saul’s leadership.

God let Samuel know that he had rejected Saul as king and wanted the prophet to appoint a new leader for the people.

“Fill your horn with oil, and be on your way,” God told Samuel. “I am sending you to Jesse of Bethlehem, for I have chosen my king from among his sons.”

God gave Samuel some instructions to keep him safe.

“Take a heifer along and say, ‘I have come to sacrifice to the Lord.’ Invite Jesse to the sacrifice, and I myself will tell you what to do; you are to anoint for me the one I point out to you,” God said.

Samuel did what God had commanded and traveled to Bethlehem. The elders of the city, knowing that Samuel was a prophet, nervously greeted him and wanted to know if he was coming in peace.

“Yes! I have come to sacrifice to the Lord,” Samuel assured the elders. “So cleanse yourselves and join me today for the banquet.”

Samuel also invited Jesse and his sons to the banquet.

When Jesse arrived with seven of his sons, he presented each one to Samuel.

But God rejected all of them.

“Not as man sees does God see, because he sees the appearance but the Lord looks into the heart,” God told Samuel.

The prophet turned to Jesse.

“The Lord has not chosen any one of these,” Samuel said. “Are these all the sons you have?”

Jesse said that his youngest son, David, was out in the fields tending the sheep.

“Send for him,” Samuel replied, “we will not begin the sacrificial banquet until he arrives here.”

Samuel took his horn of oil and anointed David as the new king of Israel.

From that day on, the Spirit of the Lord rushed upon David.

After David was anointed as king of Israel, he entered Saul’s service as a harpist and armor-bearer.

During this time, Israel was at war with the Philistines. The two armies were gathering for battle when a Philistine champion named Goliath issued a challenge.

Goliath — who was almost 10 feet tall — wanted one of Israel’s men to fight him to the death.

“I defy the ranks of Israel today,” he said. “Give me a man and let us fight together.”

David was visiting the Israelites’ camp and heard of Goliath’s challenge. He was upset that Goliath had insulted the armies of the living God.

Although he was not a warrior and was armed only with a slingshot, David talked to Saul and offered to kill Goliath.

Since God was with David, Saul agreed.

David then went to meet Goliath. When Goliath saw how small and young David was, he made fun of the boy.

Then the fight began.

David pulled out his slingshot, put a stone in it and aimed at Goliath. The stone hit Goliath in the forehead, killing him.

After this feat, Saul put David in charge of his soldiers, and David’s missions were always successful.

She entered the Sisters of St. Francis in Syracuse and worked for 20 years as a hospital administrator and teacher.

In 1883, she and six sisters moved to Hawaii to minister to people with Hansen’s disease, which at that time was called leprosy. In 1888, the sisters founded a home on the island of Molokai for women and children with the disease.

The essay question for January 2018 is: King David’s son, Solomon, asked God for wisdom. If you could ask God for one thing, what would it be?

All entries of 100 words or less must be received by the Catholic Courier no later than 4:30 p.m. on Jan. 17, 2018, to be considered for this contest. The winner, whose essay will be published in an upcoming print and online edition of Kids’ Chronicle, will be notified by phone.