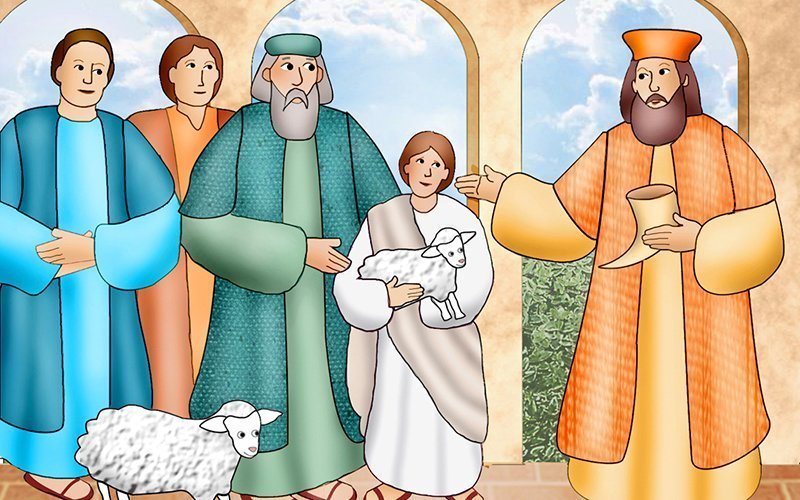 Bible Accent: The Books of Samuel

God was not pleased with Saul as the king of Israel, and he wanted a replacement. He called Samuel, who had anointed Saul. “Fill your horn with oil, and be on your way,” he said, “I am sending you to Jesse of Bethlehem, for I have chosen my king from among his sons.”

Then Samuel said to the Lord, “How can I go? Saul will hear of it and kill me.” “Take a heifer along and say, ‘I have come to sacrifice to the Lord.’ Invite Jesse to the sacrifice, and I myself will tell you what to do; you are to anoint for me the one I point out to you.”

Samuel obeyed the Lord and went to Bethlehem. The city officials did not know why Samuel had come, and they were afraid. He was a powerful leader.

They asked him, “Is your visit peaceful, O seer?”

“Yes!” said Samuel. “I have come to sacrifice to the Lord. So cleanse yourselves and join me today for the banquet.” He invited Jesse and his sons to the sacrifice as well.

When everyone was seated at the banquet, Samuel thought that Eliab was going to be the next king, but the Lord said to Samuel, “Do not judge from his appearance or from his lofty stature, because I have rejected him. Not as man sees does God see, because man sees the appearance but the Lord looks into the heart.”

Jesse replied, “There is still the youngest, who is tending the sheep.” “Send for him; we will not begin the sacrificial banquet until he arrives here,” Samuel said.

Jesse immediately sent for David, his youngest son, a strong and handsome young man. Then the Lord said to Samuel, “There — anoint him, for this is he!” In front of everyone, Samuel anointed David with the oil he had brought in the horn.

After that day, Saul selected David to be his armor bearer, and when Saul was tormented by an evil spirit, David would play his harp to soothe him. Saul declared, “Allow David to remain in my service, for he meets with my approval.”

Q&A
1. What did Samuel say about Jesse’s seven oldest sons?
2. What did God tell Samuel to do to David?

Bible Accent: The Books of Samuel

For many years, the two books of Samuel were believed to have been written by three different men.

It was believed that Samuel wrote most of what is called 1 Samuel. Then Gad, a friend of David’s, continued the historical account started by Samuel, and Nathan finished the books.

Now, however, most religious scholars believe the books were written much later, but were based on historical accounts. Some of the sources used to compile the history were from court records from when David was king, records of the temple, and from various written records or from traditional oral history.

Regardless of how the books came to be written in the form we read today, 1 and 2 Samuel tell us of the life of David as a shepherd boy who conquered a mighty giant and became a king and an ancestor to Joseph, the earthly father of Jesus.

Irenaeus (d. 304) was the bishop of Sirmium in present-day Serbia. During a time when Christians were persecuted, he was arrested and had to stand before Probus, the governor of Pannonia. The governor ordered Irenaeus to forsake God and make a sacrifice to pagan gods. He refused and was tortured.

His family and friends pleaded with the governor to spare his life. Irenaeus did not ask for any mercy and remained faithful to God. His beaten body was put into prison. After a long time suffering under terrible conditions, Irenaeus was brought before the governor again. He again refused to serve false gods and was sentenced to death. We honor him on March 24.