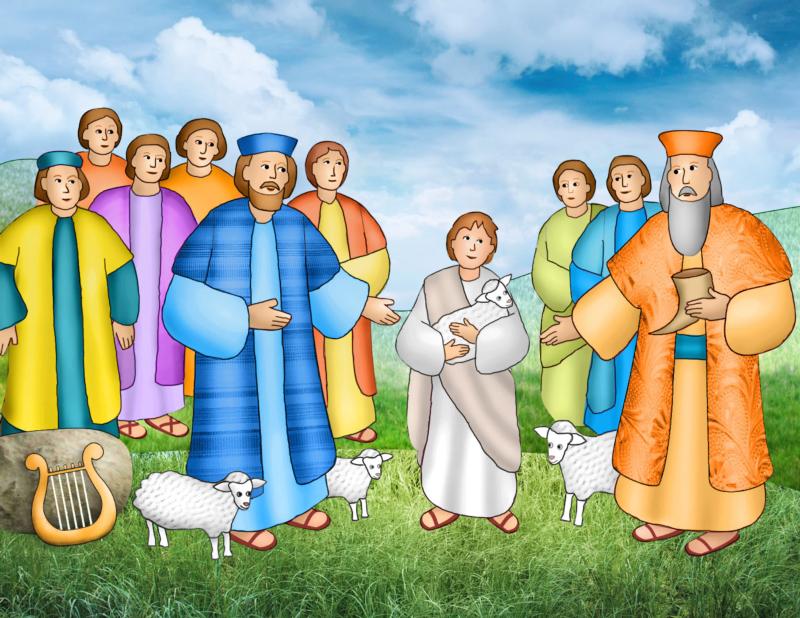 This is the artwork for Kids' Chronicle for March 22, 2020. (Illustration by Linda Rivers)

The Israelites wanted to have a king to rule over them, so God anointed Saul as the first king of Israel.

But Saul wound up doing what was evil in God’s sight, and God regretted making Saul king.

So, God sent the prophet Samuel on a mission.

“Fill your horn with oil, and be on your way. I am sending you to Jesse of Bethlehem, for I have chosen my king from among his sons,” God told the prophet.

“How can I go? Saul will hear of it and kill me,” Samuel said.

“Take a heifer along and say, ‘I have come to sacrifice to the Lord.’ Invite Jesse to the sacrifice, and I myself will tell you what to do; you are to anoint for me the one I point out to you,” God replied.

Samuel traveled to Bethlehem. As he entered the city, the elders came up to him to ask whether his visit was going to be a peaceful one.

“Yes! I have come to sacrifice to the Lord. So, purify yourselves and celebrate with me today,” Samuel told the elders. He also had Jesse and his sons purify themselves and invited them to the sacrifice.

At the sacrifice, Jesse presented his sons to Samuel one by one. Samuel thought for sure that Jesse’s eldest son, Eliab, would be chosen by God.

“Do not judge from his appearance or from his lofty stature, because I have rejected him. Not as man sees does God see, because man sees the appearance, but the Lord looks into the heart,” God told Samuel.

“Are these all the sons you have?” Samuel asked after meeting seven of Jesse’s sons, none of whom God chose.

“There is still the youngest, who is tending the sheep,” Jesse replied.

“Send for him; we will not begin the sacrificial banquet until he arrives here,” the prophet said.

David was brought before Samuel. David was a handsome youth and made a splendid appearance.

“There — anoint him, for this is the one!” God told Samuel.

Samuel took the horn of oil and anointed David in the midst of his brothers, and from that day on, the spirit of the Lord rushed upon David.

1. Whom did God regret making king of Israel?

2. Which of Jesse’s sons did God want Samuel to anoint?

In 1 Samuel 16:14, we read that after God rejected Saul as king of Israel and had Samuel anoint David as the new king, the spirit of the Lord left Saul.

Saul then began to be tormented by an evil spirit from God.

Saul’s servants noted the change in their master.

“Look! An evil spirit from God is tormenting you. If your lordship will order it, we, your servants here attending to you, will look for a man skilled in playing the harp,” they said. “When the evil spirit from God comes upon you, he will play, and you will feel better.”

Saul agreed with his servants’ recommendation.

“Find me a good harpist and bring him to me,” the king ordered.

One of the servants spoke up.

“I have observed that a son of Jesse of Bethlehem is a skillful harpist,” he said. “He is also a brave warrior, an able speaker and a handsome young man. The Lord is certainly with him.”

David entered the king’s service. Whenever the evil spirit came upon Saul, David would play his harp, and Saul would be relieved and feel better. Saul grew fond of David and made the youth his armor bearer.

“Let David stay in my service, for he meets with my approval,” Saul said in a message to David’s father, Jesse.

A note in the New American Bible explains that by approving of David, Saul identified David as his legitimate successor as king.

St. Casilda was a Muslim who lived in Spain in the 10th and 11th centuries and was known for showing kindness to Christian prisoners.

After becoming ill, she made a pilgrimage to the shrine of San Vicenzo de Briviesca and was cured in its healing waters. She became a Christian, and she lived in solitude and penance in a cell near the shrine.

Casilda reportedly lived to 100, and we honor her on April 9.

Using the hints from 1 Samuel, circle the correct answer to each question about David.

3. Whose sword did David receive from Ahimelech the priest? Abner’s/Goliath’s (21:9-10)