Samuel is chosen to be God's prophet - Catholic Courier 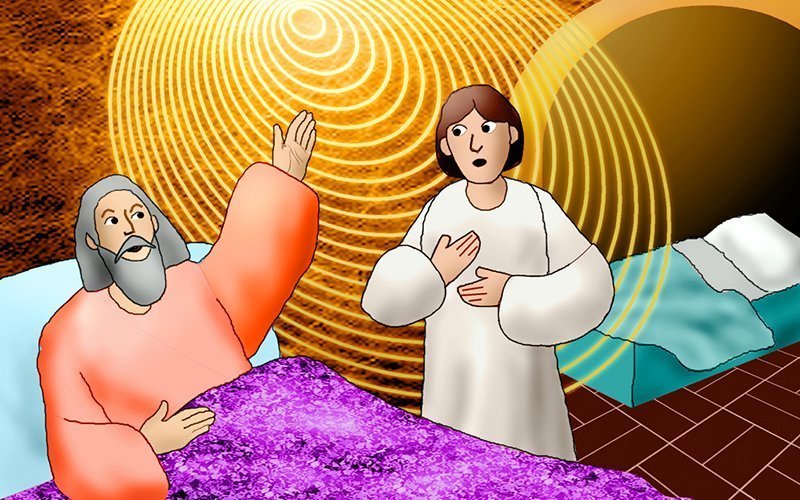 Samuel is chosen to be God’s prophet

Samuel is chosen to be God’s prophet

Samuel was asleep in his room in the temple when he heard a voice calling him. He thought it was Eli, his teacher. He went into Eli’s room and said, “Here I am. You called me.”

Eli woke up and answered, “I did not call you. Go back to sleep.” Samuel shrugged his shoulders and went back to his room, where he quickly fell back to sleep.

Again he woke up when he heard a voice calling his name. He went back to Eli’s room.

Eli knew he had not been calling young Samuel, but he thought he knew who was calling the boy. The Lord had not been speaking to any prophets for a long time, and few people had visions. Perhaps that was about to change. Maybe God had chosen a new young man to speak to his people. So Eli said, “Go to sleep, and if you are called, reply, ‘Speak, Lord, for your servant is listening.’”

Samuel went back to his room. A short time later he heard, “Samuel! Samuel!” So Samuel repeated the words Eli had told him to say. And the Lord answered, “I am about to do something in Israel that will cause the ears of everyone who hears it to ring. … I am condemning (Eli’s) family once and for all, because of this crime: though he knew his sons were blaspheming God, he did not reprove them.”

After his visit from the Lord, Samuel went back to sleep. When he woke up in the morning, he was afraid to tell Eli what he had heard. But Eli asked, “What did he say to you? Hide nothing from me!” So Samuel told him. “He is the Lord,” said Eli. “He will do what he judges best.”

As Samuel grew up, the Lord gave him words of prophecy. Samuel was known as a prophet of God from Dan to Beer-sheba. The Lord would speak to Samuel, and Samuel would speak to Israel.

READ MORE ABOUT IT:
1 Samuel 3

Q&A
1. Who was calling Samuel? 2. What did Eli tell Samuel to say to the voice?

Before there were kings in Israel, the country was ruled by judges. Samuel was the last judge. He was dedicated to God by his mother and raised by Eli in the temple and trained to become a priest.

When Samuel was getting very old, the people of Israel said they wanted a king. They chose Saul, who was tall and strong, but he turned from God and was not a good king.

God chose David to be the next king. He was anointed by Samuel in a special ceremony. King David wrote many of the psalms in the Bible, and his son Solomon also became a great king because he asked God for wisdom. The Gospel of Matthew tells us Joseph, the earthly father of Jesus, was related to David.

Theodosius was born in Garissus, Cappadocia (modern-day Turkey), in 423. An ordained reader, he wanted to make a personal pilgrimage to Jerusalem. After making that journey, he began religious studies under a teacher named Longinus.

Longinus put Theodosius in charge of a church on the road to Bethlehem. Theodosius did not want the position, and he left there as soon as he was able to so that he could live as a hermit in a mountain cave. He started to attract followers who were inspired by his faith and holiness. He had no choice but to build a mon astery to house them.

The monastery was founded on the principles of regularity, silence, charity and peace. On the grounds were four churches, one for each of the three nationalities that lived in the area, and one for penance.

Theodosius died in 529 at age 105, and thousands of people attended his funeral. We honor him on Jan. 11.