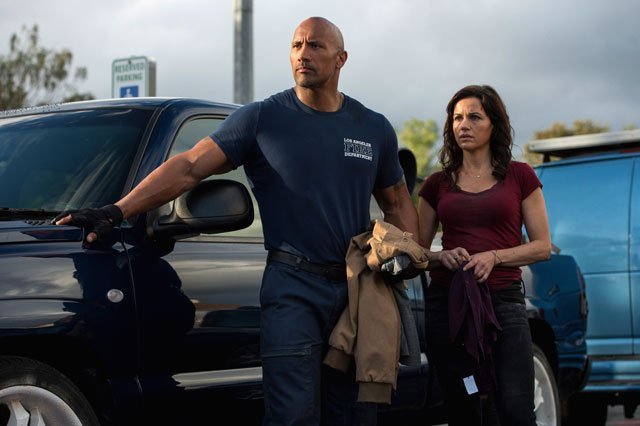 Dwayne Johnson and Carla Gugino star in a scene from the movie "San Andreas." The Catholic News Service classification is A-III -- adults. The Motion Picture Association of America rating is PG-13 -- parents strongly cautioned. Some material may be inappropriate for children under 13.

Yes, it’s time for the "big one" — make that big ones — to strike the Golden State, in this update of the star-studded disaster films that Hollywood churned out in the 1970s (including 1974’s "Earthquake").

The result, meticulously rendered in CGI, is often thrilling, sometimes silly, and frequently preposterous — in other words, your typical summer popcorn movie.

Science takes center stage in "San Andreas." Lawrence (Paul Giamatti), a seismology professor, has invented a detection system which he believes can predict an earthquake before it happens.

His system is put to the test in Nevada, where a previously unknown fault line is discovered. In the blink of an eye, the earth moves, and the Hoover Dam bursts, one of the film’s many spectacular disaster sequences.

Turns out Nevada has a connection to the San Andreas Fault. With the help of Serena (Archie Panjabi), a dishy television reporter, Lawrence sounds the alarm from Los Angeles to San Francisco for everyone to "drop, cover and hold on."

"The earth will literally crack and you will feel it on the East Coast," he warns.

But first, domestic drama intrudes. Ray (Dwayne "The Rock" Johnson), a helicopter rescue pilot with the Los Angeles Fire Department, is suffering from empty-nest syndrome. His marriage to Emma (Carla Gugino) has failed, and their daughter, Blake (Alexandra Daddario), is leaving for college in San Francisco.

Fortunately, Ray has little time to fret when the first of several earthquakes strike (a "seismic swarm"), starting in the City of Angels and moving up the coast, toppling everything in its path.

Enter the action hero. Ray pilots his helicopter to rescue Emma, and together they head north to find their daughter.

"This is not a normal day!" Ray exclaims. And how.

In the meantime, Blake maneuvers through the ruins of the City by the Bay with the help of two brothers visiting from England, Ben (Hugo Johnstone-Burt) and Ollie (Art Parkinson), all the while watching the sky for Daddy’s chopper.

An epic of destruction and catastrophe, "San Andreas" is not for the young or faint of heart. Nor is it likely to boost tourism to California anytime soon.

The film contains relentless, intense but mostly bloodless disaster-related violence and mayhem, and occasional crude language. The Catholic News Service classification is A-III — adults. The Motion Picture Association of America rating is PG-13 — parents strongly cautioned. Some material may be inappropriate for children under 13.