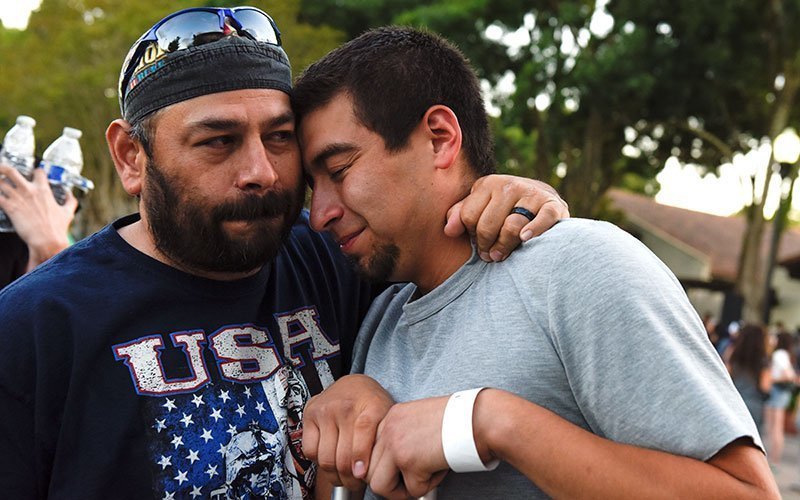 Justin Bates, right, a survivor of the Gilroy Garlic Festival mass shooting, is comforted by his father, Rob Bates, during a candlelight vigil outside Gilroy City Hall in California July 29, 2019. (CNS photo by Kate Munsch, Reuters)

Catholics gather to pray for victims of California shooting

WASHINGTON (CNS) — A year after a gunman opened fire at a popular family-oriented festival in the town of Gilroy, California, Bishop Oscar Cantu of San Jose offered his prayers for continued healing, remembering the two children and an adult killed in the mass shooting.

“On this first anniversary of the shooting tragedy at the Gilroy Garlic Festival, I come to you to express my continued prayers,” said Bishop Cantu in a video posted on Facebook July 27, a day before the anniversary. “You’re in my prayers as you continue to heal from the emotional and spiritual wounds of that traumatic evil that took the lives of 6-year-old Stephen Romero, 13-year-old Keyla Salazar and 25-year-old Trevor Irby.”

The three died after being shot by 19-year-old Santino William Legan, who died after a shootout with police. The gunman also injured 17 others.

He also delivered the message in Spanish.

The Catholic community offered a prayer service at St. Mary’s Church in Gilroy and broadcast it so others could attend while maintaining social-distance standards during the coronavirus pandemic. They also participated in an outdoor memorial event organized by the Santa Clara County District Attorney’s Office to honor of the victims, survivors, victims’ families, first responders, and others affected while attending the popular summer event.

“We gather one year later to remember, to lament, to honor, and to commit,” said Father Jose Rubio, of the Gilroy parish, during a July 28 memorial. “We remember the panic, the confusion, the terrified people, and we remember the bravery of so many.”

Three police officers opened fire on the gunman, trying to stop the carnage as festival-goers ran frantically, many screaming and crying while trying to get away from the festival grounds. The gunman used an assault rifle to carry out the attack, authorities said. Though no clear motive was ever arrived at, some speculated the attack targeted Latinos.

The attack took place just days before another shooter opened fire at a Walmart in El Paso, Texas, believed also to be directed at Latinos, as the alleged shooter reportedly told authorities he was targeting “Mexicans.”

Authorities later found a document allegedly written by the gunman that was described as anti-immigrant, writing about the “Hispanic invasion” of the state.

“We lament the deaths of three people so young, whose whole life was still ahead of them,” said Gilroy’s Father Rubio at the memorial. “We lament the easy access to weapons that cause so much destruction. There have been too many shootings in our country. We lament the prejudice that may have led to this and other shootings.”