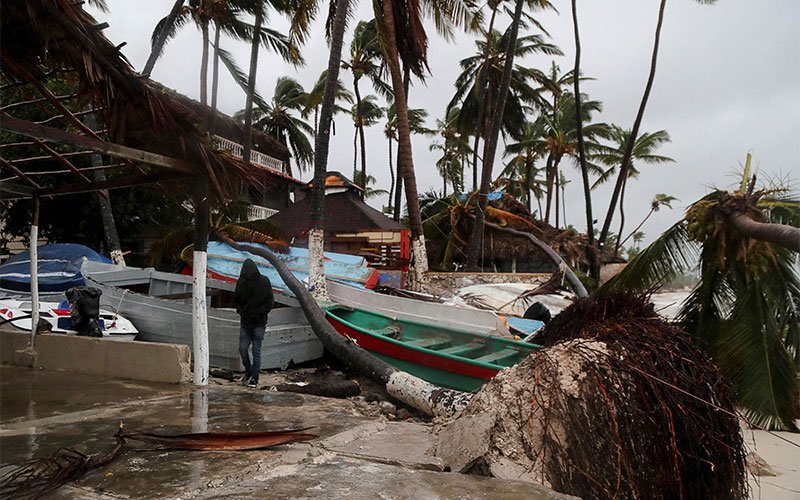 A person walks amid debris on the seashore in the aftermath of Hurricane Fiona in Punta Cana, Dominican Republic, Sept. 19, 2022. (CNS photo by Ricardo Rojas/Reuters)

Puerto Rico’s archbishop said he has not been in contact with all his priests since Hurricane Fiona knocked out power to the island, and he expressed concern for the hurricane’s impact on the southern and western parts of the island.

Archbishop Roberto González Nieves also said he expected Catholic schools in the most affected areas to be closed for weeks, and he expressed concern for the trauma suffered by children.

“I haven’t been able to have a Zoom call today and very few phone calls in general because the signals are not working — but yesterday I had one Zoom with 35 pastors; many could not join us because they don’t have electricity or internet or water,” Archbishop González told Catholic News Service by phone after several failed attempts to reach him Sept. 21.

“This hurricane sat over the island for almost a day with heavy winds and rains, but the south and the west is where there were towns destroyed — the Ponce and Mayagüez regions really got the brunt of the hurricane,” he added.

“In terms of the general San Juan area, my sense is that the damage is minimal, but in some respects it was more difficult than during Maria, when I never lost contact through the internet or telephone. But with Fiona it rained constantly for a very long time.”

The hurricane touched down in Puerto Rico Sept. 18, causing massive flooding, wind damage, power outages and the shutdown of water service across a large part of the island, affecting millions of residents and leaving at least four people dead, officials said, although they were investigating at least four more deaths.

Earlier, Fiona left one dead in Guadeloupe. After the hurricane passed Puerto Rico, it caused worse damage in the Dominican Republic as it picked up strength moving north, triggering mudslides and destroying hundreds of homes. In the Dominican Republic, at least two people were killed — one by a utility pole, another by a tree, which were toppled by gusting winds.

Fiona also hit Turks and Caicos Sept. 20, and gusts were recorded as high as 155 mph Sept. 21 as it headed toward Bermuda. It was expected to pass between Bermuda and the eastern United States before traveling northward to Nova Scotia and other Atlantic provinces of eastern Canada.

Archbishop González told CNS that various Catholic Charities chapters around the U.S. as well as the Chicago-based Catholic Extension had already offered financial or material support.

He said the island’s own Caritas staff had not had enough time to compile a report on the damage in the hard-hit areas due to transportation and public safety difficulties following Fiona.

He described both Ponce and Mayagüez as impoverished areas and said Ponce was still reeling from damage following a recent earthquake that left the local cathedral with structural damage that had only recently been addressed in a preliminary way.

He also said post-hurricane repairs and hardening of Puerto Rico’s infrastructure following Hurricane Maria in 2017 were not as thorough as hoped for, and the situation has now been exacerbated by Fiona.

“We did not attend sufficiently into the recovery efforts after Hurricane Maria, so it is a big wakeup call. Here in this hurricane (path), every couple of years we get to survive one of these atmospheric catastrophes,” he said, adding that he also experienced a severe hurricane crisis during his time as a coadjutor bishop in Corpus Christi, Texas.

“This kind of experience is especially traumatic for children; during a hurricane it is not just the winds and rains, it is the noise which is quite traumatic for children,” the archbishop said, adding that he expects local Catholic schools in the affected areas would be closed for weeks.

In separate telegrams sent to the presidents of the bishops’ conferences of Puerto Rico and of the Dominican Republic Sept. 21, Pope Francis assured them of his prayers, asking that God would offer his consolation to those suffering as a result of the natural disaster.

To find out how to assist visit the website for Caritas in Puerto Rico: https://caritaspr.net/.