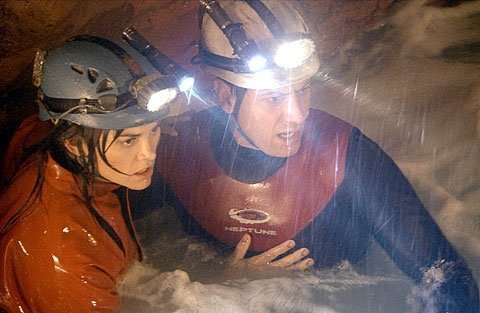 NEW YORK (CNS) — Don’t be misled by the religious ring of "Sanctum" (Universal). This 3-D action adventure is, in fact, an unholy contribution to the cult — and culture — of death.
?
Even on an artistic level, executive producer James Cameron’s track record of designing innovative tools for making nature films and blockbusters such as "Titanic" and "Avatar" doesn’t hold true for this shallow effort about a deadly caving expedition in Papua New Guinea.
?
Weeks into the exploration of one of the world’s largest cave systems, fatigue has set in and nerves are fraying. Master diver Frank McGuire (Richard Roxburgh) leads the complex operation, whose ultimate aim is to follow a subterranean river to the sea.
?
Frank and his colleague George (Dan Wyllie) are joined by Frank’s teenage son Josh (Rhys Wakefield); Carl (Ioan Gruffudd), the billionaire financing the project; and Carl’s girlfriend, Victoria (Alice Parkinson).
?
When a tropical storm lashes the island site and the cave begins to flood, the five are trapped miles underground. As they are forced to swim, climb and rappel through a dark, perilous environment, the picture invites us to wonder who among them can withstand Mother Nature — not to mention the uglier aspects of human nature — and make it to the surface.
?
Laughably pedestrian dialogue, paper-thin characters and predictable plotting can be excused in this context if there’s a palpable sense of adventure and enough visual fireworks. Yet far more serious than director Alister Grierson’s failure to engage viewers or to take advantage of a lush setting is his project’s fundamental lack of respect for human life.
?
Presumably, rational people courageous enough to cave-dive have come to terms with their mortality, but these daredevils seem to court death. Worse, the mild qualms expressed when Frank dispatches a gravely injured character are what pass for humane behavior in John Garvin and Andrew Wight’s script.
?
And when it comes to yet a second act of euthanasia, the offense is deepened as well as doubled, since the demise of the person now in question is much less certain.
?
Adding to the overall queasiness is the misogynistic way in which the two female characters — Victoria and, earlier, the doomed Judes (Allison Cratchley) — are killed off with relative relish after each panics.
?
This perverse embrace of death is made all the more egregious by the discovery that the screenplay was inspired by a real-life incident during which 15 divers (including Wight) were trapped in an underground cave from which all were rescued. In the death chamber that is "Sanctum," the intrepid are not so fortunate.
?
The film contains implicit endorsement of euthanasia; skewed values; some gore; brief irreverence; fleeting rear male nudity; a cascade of rough, crude and crass language; occasional sexual banter and toilet humor; and an obscene gesture. The Catholic News Service classification is O — morally offensive. The Motion Picture Association of America rating is R — restricted. Under 17 requires accompanying parent or adult guardian.
?
– – –
?
McCarthy is a guest reviewer for Catholic News Service. More reviews are available online at www.usccb.org/movies.