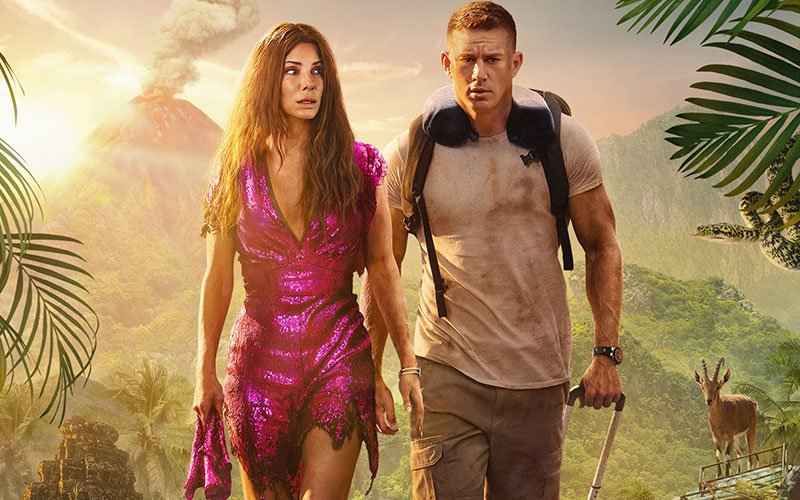 This is the movie poster for "The Lost City," staring Sandra Bullock and Channing Tatum. (CNS photo by Paramount Pictures)

NEW YORK (CNS) — Grown-ups will find “The Lost City” (Paramount) a crowd-pleasing blend of action, comedy and love story. However, this generally diverting adventure includes material that makes it doubtful fare even for mature teens.

The story focuses on romance novelist Loretta Sage (Sandra Bullock) and her Fabio-like cover model, Alan Caprison (Channing Tatum). Alan has been representing Loretta’s fictional hero, Dash McMahon, for so long that her fans conflate the two, much to the scribe’s annoyance since she considers Alan vain and vacuous. What she doesn’t realize is that easily tongue-tied Alan carries a secret torch for her.

Widowed Loretta is struggling with writer’s block as a result of unresolved grief. But she faces a much bigger problem when she’s suddenly kidnapped by crazed billionaire Abigail Fairfax (Daniel Radcliffe).

Fairfax believes Loretta’s latest book, “The Lost City of D,” which was based in part on research she did years earlier with her archaeologist husband, holds the key to finding a fabulous treasure buried on a tiny tropical island. When she refuses to cooperate, he forcibly transports her there.

Despite having none of the skills needed to do so, Alan promptly sets off to rescue Loretta.

As directed and co-written by brothers Aaron and Adam Nee (working with Oren Uziel and Dana Fox), the travails of the central pair as they run through the jungle trying to evade Fairfax’s minions certainly provide some amusing moments. And a cameo appearance by Brad Pitt as Jack Trainer, a seemingly invincible Navy SEAL, is nothing short of hilarious.

Alan and Loretta’s burgeoning relationship, moreover — based, in part, on Loretta’s reconsideration of her initially dismissive view of Alan — remains chaste. Yet a couple of sequences, one of shocking mayhem and another in which a character strips down in a nonsexual context, take this well away from the realm of family entertainment.

The former interlude represents an extreme form of gross-out humor while the latter portrays an awkward, rather than intimate, situation. Both are needlessly included in what is otherwise a jaunty tale of the heroism that can be summoned up by love.

The film contains brief harsh violence with graphic gore, shots of rear male nudity played for laughs, other sexual and scatological jokes, a couple of uses of profanity, several milder oaths and occasional crude and crass language. The Catholic News Service classification is A-III — adults. The Motion Picture Association rating is PG-13 — parents strongly cautioned. Some material may be inappropriate for children under 13.