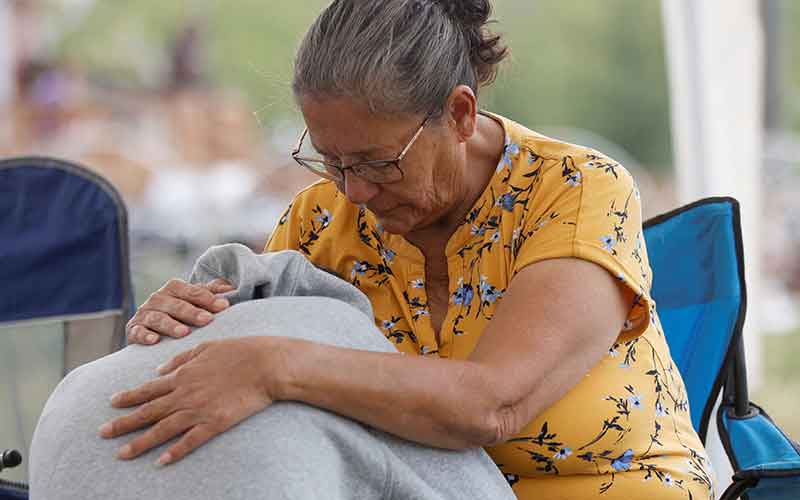 Annie Sanderson comforts her granddaughter Sept. 5, 2022, after a stabbing spree left at least 11 people in the James Smith First Nation and in the nearby town of Weldon, Saskatchewan. (CNS photo by David Stobbe/Reuters)

The Catholic bishops of Saskatchewan offered prayers for everyone affected by the deadly stabbing rampage that left 12 dead — including the two suspected killers — and at least 18 injured.

And Catholics in the Prince Albert Diocese joined the local Anglican bishop at a special service for the victims and survivors of the Sept. 4 stabbing spree on the James Smith First Nation and in nearby Weldon, Saskatchewan.

At least 18 people were injured.

The five bishops of Saskatchewan said they mourn “those whose lives have been lost, those who have been injured and those whose peace and security has been shattered by these horrific events,” and invited “all to join in prayer, turning to God for comfort and healing.”

The bishops also prayed for everyone across Saskatchewan who has been providing assistance, include “first responders, health care workers and everyone offering help and support to those affected by this tragedy.”

Late Sept. 7, media reported Myles Sanderson, 32, died after police forced the stolen car he was driving off a highway in Saskatchewan. One official told journalists he died of self-inflicted injuries. The Associated Press reported members of Saskatchewan’s Serious Incident Response Team went to the arrest site and would review Sanderson’s death and police conduct.

Sanderson and his brother, Damien, were alleged to have carried out the early morning spree Sept. 4 in the James Smith First Nation, where they lived, and the surrounding areas. Damien Sanderson was found dead Sept. 5 near the one of the scenes of the attacks.

The Catholic Diocese of St. Albert asked its followers on Facebook Sept. 4 to “pray with (Anglican) Bishop (Michael) Hawkins and the community of James Smith First Nation and Weldon.” Bishop Hawkins led a prayer vigil that was recorded and posted on social media. The Anglican Church presence is strong in the Cree community, and James Smith First Nation is home to St. Stephen’s Anglican Church.

“Like all of you, I am reeling from the news from this morning and today about the unspeakable tragedy at James Smith reserve and in Weldon,” said Bishop Hawkins. “It is hard to imagine the terror, the grief, the concern, the sorrow and trauma of the families and the people.”

The bishop alluded to the April visit of Archbishop Justin Welby of Canterbury, who visited the Cree community. Archbishop Welby met with residential school survivors and First Nations elders at the reserve’s Bernard Constant Community School.

“At the time, Archbishop Justin spoke in reference to the experience and legacy of the residential school as a ‘living hell,'” said Bishop Hawkins. “Surely what the people of James Smith have gone through today, and are experiencing now, is a living hell.”

“Having visited James Smith Cree Nation earlier this year, I’m appalled and deeply saddened by the fatal stabbings there and across Saskatchewan this weekend. I mourn with the community and pray that God would comfort all those experiencing such unimaginable anguish,” said Archbishop Welby.

“We at Greater Saskatoon Catholic Schools are deeply troubled and saddened by news of the tragic events at James Smith Cree Nation and Weldon over the weekend. We pray for the souls of those who were killed, for a speedy recovery of those injured, and comfort of God the Creator for those who mourn.”

Schools did open, but the board said it understood if “parents do not feel comfortable sending children to school.”

Contributing to this story was Quinton Amundson of The Catholic Register, Toronto.