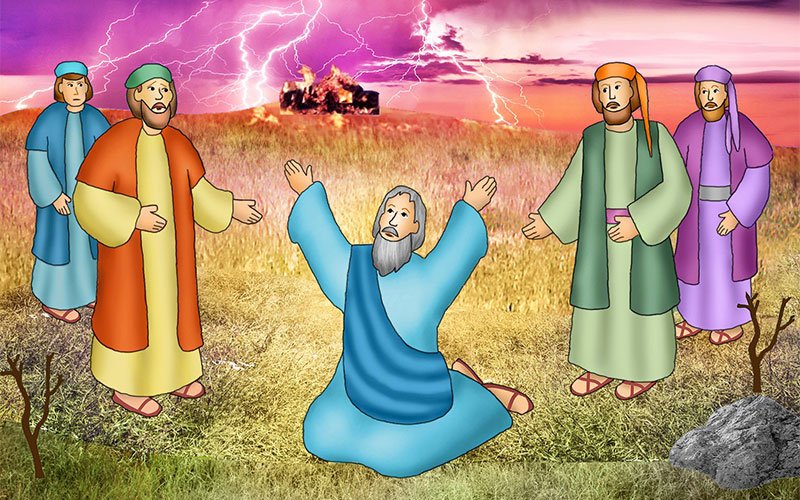 This is the artwork for Kids' Chronicle for Sept. 26, 2022. (Illustration by Linda Jeanne Rivers)

Satan tests Job and tries to get him to blaspheme God

One day, the angels of God came to present themselves before the Lord.

Satan also came among them.

“From roaming the earth and patrolling it,” Satan replied.

God asked if Satan had noticed a man named Job.

“There is no one on earth like him, blameless and upright, fearing God and avoiding evil,” God said.

Satan was not impressed.

“Is it for nothing that Job is God-fearing? Have you not surrounded him and his family and all that he has with your protection? You have blessed the work of his hands, and his livestock are spread over the land. But now put forth your hand and touch anything that he has, and surely he will blaspheme you to your face,” Satan said.

“Behold, all that he has is in your power; only do not lay a hand upon his person,” God said.

Satan left God’s presence and set out to make Job’s life so miserable that he would blaspheme God.

One day, as Job’s 10 children were feasting in the eldest brother’s home, a messenger came to Job.

He reported that the Sabeans had carried off the oxen and donkeys and killed the servants.

“I alone have escaped to tell you,” he said.

A second messenger rushed in to report that he was the only one to survive lightning from heaven that had struck and consumed the sheep and servants.

A third messenger rushed in. He alone had escaped a raid by the Chaldeans, who had carried off the camels and killed the servants.

A fourth messenger brought the most devastating news of all.

“Your sons and daughters were eating and drinking wine in the house of their eldest brother, when suddenly a great wind came across the desert and smote the four corners of the house. It fell upon the young people and they are dead; and I alone have escaped to tell you,” he said.

Job arose, tore his cloak and cut off his hair. He fell to the ground and worshipped.

“The Lord gave and the Lord has taken away; blessed be the name of the Lord!” Job said.

Despite everything bad that happened to Job, he did not sin, nor did he say anything disrespectful of God.

1. Who came among the angels?

Answer: In the land of Uz.

In the New Testament, we read about another person whom the devil tried to lead into wrongdoing.

In Luke 4, we learn that after Jesus was baptized, he spent 40 days in the desert to be tempted by the devil.

Jesus did not have anything to eat during this time, so the devil told Jesus to command a stone to become bread.

“It is written, ‘One does not live by bread alone,'” Jesus replied.

The devil took Jesus to a high place and showed him all the kingdoms of the world.

“All this will be yours, if you worship me,” the devil said.

“It is written: ‘You shall worship the Lord, your God, and him alone shall you serve,'” Jesus said.

The devil led Jesus to the Temple in Jerusalem and had him stand on the roof’s edge.

“If you are the Son of God, throw yourself down from here, for it is written: ‘He will command his angels concerning you, to guard you,’ and: ‘With their hands they will support you, lest you dash your foot against a stone,'” the devil said.

“It also says, ‘You shall not put the Lord, your God, to the test,'” Jesus countered.

The devil realized he could not tempt Jesus, so he left.

Marie Marguerite Dufrost de Lajemmerais was born in the province of Quebec, Canada, in 1701.

She married a scoundrel who died in 1730, leaving her with two young sons and the debt he had accumulated. To provide for her family, she ran a general store and then began nursing poor women in her home.

The latter endeavor led to her overseeing Montreal’s only hospital and founding the Sisters of Charity of Montreal. During the French and Indian Wars, her nurses gained much respect for tending to everyone.

Using the hints provided, put a T next to the sentences about Job that are true and an F next to the ones that are false.