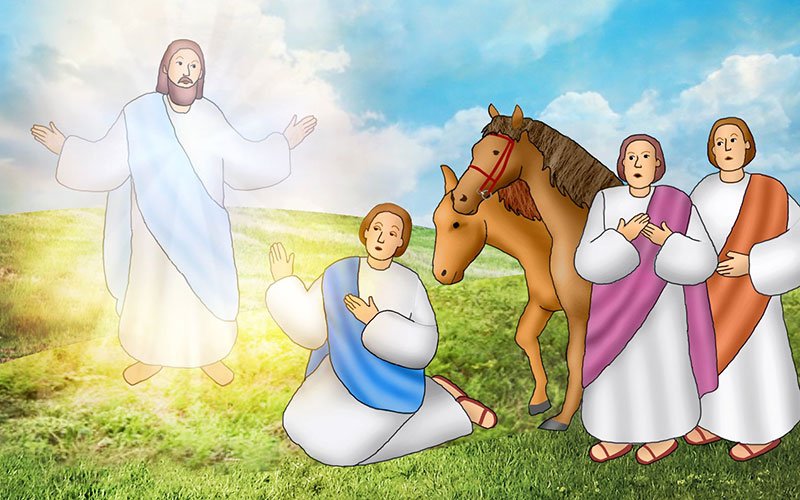 This is the artwork for Kids' Chronicle for Jan. 25, 2022. (CNS illustration/Linda Rivers)

A Jewish man named Saul was working to destroy the church by helping to imprison the followers of Jesus.

He went to the high priest in Jerusalem for letters to the synagogues in Damascus, in case he found any men or women there who were Christians. If he did, he planned to bring them back to Jerusalem in chains.

As he and two companions traveled to Damascus, a light from the sky suddenly flashed around Saul. As he fell to the ground, he and his companions heard a voice.

“Saul, Saul, why are you persecuting me?” the voice said.

“I am Jesus, whom you are persecuting,” the voice replied. “Now get up and go into the city, and you will be told what you must do.”

When Saul got up from the ground, he opened his eyes and could not see anything, so his companions led him to Damascus.

Meanwhile, in Damascus, a man named Ananias had a vision from Jesus.

“Get up and go to the street called Straight and ask at the house of Judas for a man from Tarsus named Saul. He is there praying, and in a vision, he has seen a man named Ananias come in and lay his hands on him, that he may regain his sight,” Jesus said.

“Lord, I have heard from many sources about this man, what evil things he has done to your holy ones in Jerusalem,” Ananias replied. “And here he has authority from the chief priests to imprison all who call upon your name.”

“Go, for this man is a chosen instrument of mine to carry my name before gentiles, kings and Israelites, and I will show him what he will have to suffer for my name,” Jesus said.

“Saul, my brother, the Lord has sent me, Jesus who appeared to you on the way by which you came, that you may regain your sight and be filled with the Holy Spirit,” Ananias said as he laid his hands on Saul.

Things like scales immediately fell from Saul’s eyes, and he regained his sight. He got up and was baptized, and he ate and recovered his strength.

Saul at once began proclaiming in the synagogues that Jesus is the Son of God.

There are many times in the Acts of the Apostles where Saul (who became known as Paul) was persecuted for his belief in and preaching about Jesus.

For example, in Acts 16:16, we read that Paul and Silas traveled to Philippi, where they were beaten and put in prison. The jailer was told to guard them securely, so he placed them in the innermost cell and secured their feet to a stake.

Around midnight, there suddenly was an earthquake so severe that the jail’s foundation shook, all the doors flew open and all the prisoners’ chains were pulled loose.

The jailer woke up and was distraught to see what had happened, thinking that all the prisoners had escaped.

“We are all here,” Paul shouted to the jailer.

The jailer asked for a light and made his way to Paul and Silas’ cell. He fell before them and asked what he needed to do to be saved.

“Believe in the Lord Jesus, and you and your household will be saved,” they said.

In the third century, St. Nestor was the bishop of Magydus in the Roman province of Pamphylia, which is now Turkey.

The Roman emperor at the time, Decius, required all citizens to sacrifice to Roman gods, and they had to produce certificates to prove they were doing so. Those who did not comply would be imprisoned and tortured. Many Christians who wanted to save themselves complied and took up this pagan practice.

Nestor, however, stood his ground and refused to comply. He also sent into hiding many Christians who wanted to save themselves but did not want to sacrifice to pagan gods.

Nestor was arrested and tortured. When he told his torturers he would ever be with Christ, they crucified him.

Using the hints provided, fill in the blanks in the sentences about Saul/Paul.