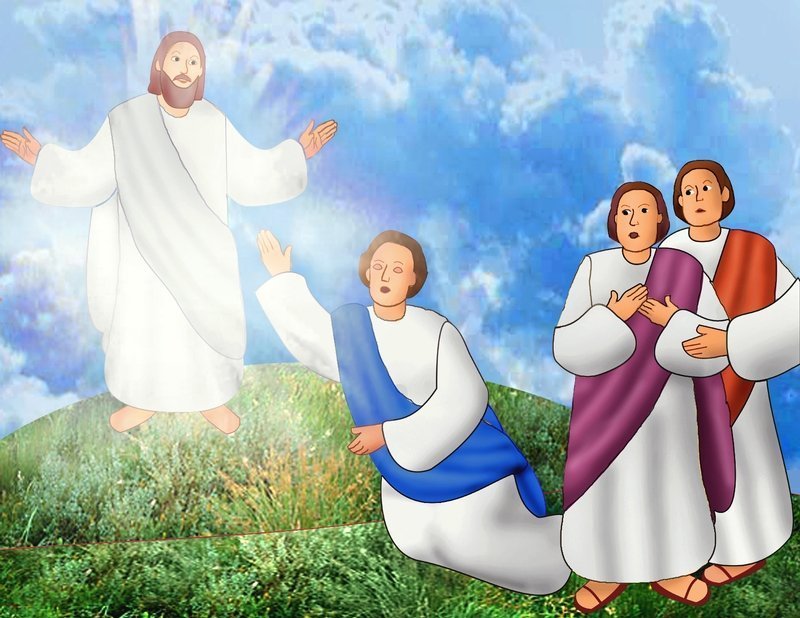 After Jesus returned to his father in heaven, the apostles began traveling from town to town preaching about the Lord. Many Jews and Gentiles began to believe in Jesus and became members of the first Christian community.

During this time, Saul, a Jewish man from Tarsus, began to persecute Christians. He hated them so much that he asked the high priest for special permission to find Christians in Damascus and bring them back to Jerusalem in chains.

On his way to Damascus, Saul suddenly saw a great light. It was so bright that it made him fall to the ground.

“Saul, Saul, why are you persecuting me?” a voice asked.

The men traveling with Saul were shocked, because they heard a voice but saw no one. Saul demanded to know who was speaking.

“I am Jesus, whom you are persecuting,” the voice said in reply. “Now get up and go into the city and you will be told what you must do.”

When Saul got up, he no longer could see. His friends took him by the hand and led him to Damascus, where for three days he was blind and would not eat or drink.

In the meantime, the Lord appeared in a vision to one of his followers, Ananias, who lived in Damascus. He told Ananias to find Saul and lay his hands on him to cure him of his blindness.

Ananias was surprised, because he had heard of Saul and his persecution of Christians.

“Lord, I have heard from many sources about this man, what evil things he has done to your holy ones in Jerusalem,” Ananias said. “And here he has authority from the chief priests to imprison all who call upon your name.”

“Go,” said the Lord, “for this man is a chosen instrument of mine to carry my name before Gentiles, kings, and Israelites, and I will show him what he will have to suffer for my name.”

So Ananias found Saul staying at the house the Lord said he would be in.

“Saul, my brother,” Ananias said, “the Lord has sent me, Jesus who appeared to you on the way by which you came, that you may regain your sight and be filled with the holy Spirit.”

Immediately, things like scales fell from Saul’s eyes, and he could see again. Afterwards, he was baptized and became a follower of Jesus.

READ MORE ABOUT IT
Acts 9

1. Who were the people Saul hated?
2. Who helped Saul regain his sight?

Saul, also known as Paul, traveled the world to spread the good news of Jesus after he converted from Judaism to Christianity. He journeyed to such faraway places as Arabia, Italy, Spain, Asia Minor and Greece to make new followers of Christ.

Paul became very well-known for his preaching. Sometimes, he preached for a very, very long time. Once, in Acts 20:7-12, he spoke to a group of people after their evening meal and right through to sunrise. A young man named Eutychus, who was seated on a third-story window sill as he listened to Paul, grew sleepy and fell to his death. Paul rushed outside, put his body on top of the man and raised him from the dead.

Paul also was known for answering questions for or solving debates among the members of the growing Christian communities around the world. He did this by writing them letters, which were full of instructions and encouragement. Many of these letters survived through the years and became books in the New Testament.

Paul never stopped preaching about Jesus, even though it was very dangerous for him to do so. Sometimes he was even put in jail for preaching. In the year 67, Paul was arrested for a second time in Rome and was put to death by the Romans.

St. Blaise (d. 316) was a bishop in Armenia who was told in a vision to hide in a cave in the mountains when Christians were being persecuted.

He was eventually found and taken to jail. On the way there, it is said that he commanded a wolf that had carried off a poor woman’s pig to return the pig unharmed. It also is said that he healed a boy who was near death from choking on a fish bone stuck in this throat.

St. Blaise was put to death for his faith, and we honor him on Feb. 3.